Having celebrated 20 years in operation during 2014, Active Tunnelling is able to demonstrate a proven track record of delivering specialised trenchless tunnelling solutions and shaft sinking. The company was founded by John Doherty who had previously been involved in the tunnelling industry since he was only 17 years old and was subsequently involved in the Channel Tunnel as a 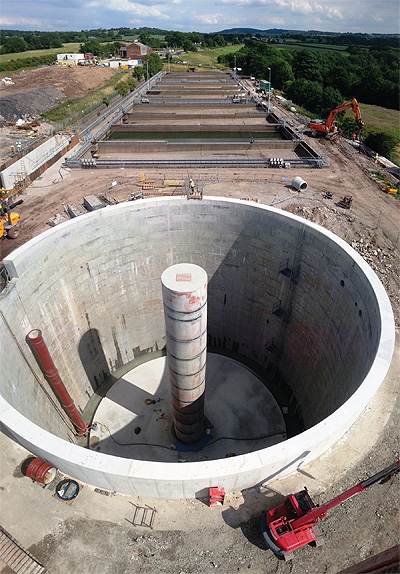 leading miner and tunnel boss. The level of experience present within the business has enabled Active Tunnelling to complete over 500 major projects over two decades within the industry.

Active Tunnelling’s expertise in delivering a range of tunnelling and associated services, is backed by one of the UK’s largest selections of specialist plant, including a fleet of micro-tunnelling, auger boring and pipe jacking equipment and machines in various sizes that are capable of traversing through any ground condition; hydraulic rams capable of pushing from 250-500 tonnes each; vertical hydraulic grabs capable of reaching a depth up to 25 metres; excavators ranging from three tonnes to 30 tonnes; crawler cranes ranging from 5t to 90 tonnes as well as many smaller items. Active Tunnelling provides a turnkey solution through its proprietary fleet of vans to low loaders that ensure that clients can rely on efficient mobilisation. To ensure that the quality and level of service offered by the company is never compromised, Active Tunnelling continually invests in new plant and machinery. Its plant yard employs 12 permanent members of staff and is testimony to the company’s strict maintenance programme and fast response time in the event that its site teams should encounter any problems.

With a broad scope of services and its extensive portfolio of plant equipment, Active Tunnelling has carried out hundreds of successful projects throughout the UK and Ireland. These have included shaft sinking operations during the construction of a detention tank as part of works at the Blackburn Waste Water Treatment Works (WWTW) during 2013 / 2014. The client for the project was KMI+ Limited, working in partnership with United Utilities plc, while the purpose of the work was to resolve two unsatisfactory intermittent discharges located at the site. Active Tunnelling was employed as specialist contractors to install a 28 metre diameter shaft at some 24 metres deep. The concrete base of the shaft was cast incorporating 106no ground anchors with the quantity of concrete in the base being 915m3 with a further 710m3 of benching being installed afterwards, with a central flushing column also being constructed, utilising a bespoke external column shutter designed and fabricated by its Specialist Plant Division.

The company’s Laser Guided Auger Boring techniques have also been applied to high-profile projects, including the use of laser guided auger boring during the M25 widening scheme between junctions 16-23, which began during May 2009 and ended in May 2012. Active Tunnelling was awarded a contract to install cross carriageway drainage as part of the works and was initially expected to construct 16 crossings. However, the client, Skanska-Balfour Beatty, was so impressed by the benefits of trenchless technology that Active Tunnelling finally constructed 150 crossings between 300mm and 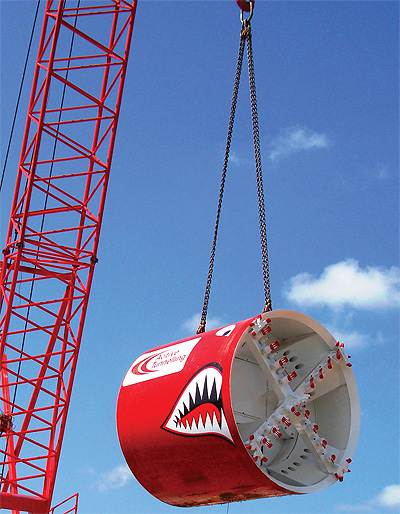 600mm in diameter, that necessitated an impressive 1.49 miles of auger boring.

Auger boring is one of the oldest methods of trenchless construction and has been in use since before the term ‘trenchless technology’ was introduced and is an essential technique when accuracy is required (within 25mm Line and Level). The adoption of trenchless technology saved vast quantities of materials and did not require huge earth movements to be carried out, whereas traditional open-cut pipe installation would have had a negative impact on the environment. Active Tunnelling saved the client the procurement of materials amounting to 7,500 tonnes, 26,000 tonnes of Type 1 and muck away of 7813m3, weighing a combined total of 173,000tonnes, which equates to 9611 loads; and 660m2 of tarmac. Auger boring is becoming increasingly popular with Active Tunnelling clients and the company maintains a fleet of auger-boring machines ranging from 150mm to 725mm in diameter.

Active Tunnelling is able to provide micro-tunnelling from 600mm diameter upwards using Iseki and Herrenknecht Slurry machines, as recently completed on a scheme in Ipswich for Balfour Beatty Construction Services on behalf of the Environment Agency. ATL sunk a 6mID and an 8.2m ID shaft with a 250mm fibre reinforced concrete jacket underwater to a depth of 26m and installed a 3m deep concrete plug underwater. It then carried out a 2.1m ID tunnel to link the 2 shafts underneath a Wet Dock using a Herrenknecht AVND2000AB Slurry Machine with a compressed air cushion to successfully install a 45m long tunnel.

Active Tunnelling also carries an impressive fleet of 1200, 1500 and 1800 Full Faced TBM’s that are used extensively throughout the UK and do not require the slurry process allowing it to work in tighter working areas with a fraction of the setup charges incurred with the slurry machines. ATL recently completed a scheme for Interserve on the Bathing Waters Projects in Ivybridge Devon. ATL sunk a 15m ID segmental shaft 12m deep and a 3.05 segmental shaft 9m deep and then pipejacked 150m underneath an access road and the A38 Dual Carriageway in a moderately strong slate. The contract was completed on programme and to Line and level.

ATL recently completed the Royal Leamington Spa Phase 3 works for NMC Nomenca on behalf of Severn Trent. ATL successfully completed over 300m of 1200mm ID and 310m of 1500mm ID pipejacking in sandstone with our Full Faced TBM’s. There was also a 9m ID shaft 15m deep and various sheeted cofferdams with the largest 11m x 8m x 9m deep for the CSO structure. Active Tunnelling has used its 1800 Full Faced TBM on several projects, including during shaft construction and tunnelling works for Wessex Water in Western Super Mare.

The scheme was required as part of improvement works to Bleadon Sewage Treatment Works for Wessex Water. Active Tunnelling’s part of the project involved the construction of three segmental shafts, varying in size from 6.5 metres diameter at 14 metres deep, 7.5 metres diameter at 23 metres and 10.5 metres diameter with a depth of 21 metres. Further to this the company created a 1.8 metre link tunnel between the 7.5 metre and the 10.5 metre shaftover 50m long with our 1800 TBM and designed and fabricated a 3.3 metre ID disposable Handshield to tunnel between the 7.5 metre shaft and an existing wet well. ATL also carried out extensive concrete finishing works along with reinforced concrete baffle walls and complicated benching works within the shafts. Active Tunnelling installed all three of the segmental shafts using the caisson sinking method, through the use of its own vertical jacking rams. The company also used its own excavators and grabs which excavated the bulk of the shafts, through the soft clays & running sand into the soft limestone, down to the mudstone, approx 20m deep. The hard mudstone, was then broken out via excavator & breaker, lowered into the shafts via 50 ton crawler crane. ATL also organised specialist dewatering prior to the works, mainly to deal with the water in the running sands.

With an extensive portfolio of completed projects, a well maintained fleet of plant equipment and an expert core of personnel, Active Tunnelling has a proven track record of effective project provision. Its trenchless tunnelling technology enables Active Tunnelling to protect the environment and save its clients capital on costly materials, making it the go-to partner in micro-tunnelling, auger boring, shaft sinking, pipe jacking and traditional tunnelling methods.