Since its formation in 1999, the British Aggregates Association (BAA) has firmly established itself as the voice of the UK’s SME quarry operators. Not only ensuring that those within the independent sector of the quarry industry are heard at all levels of the UK and EU administrations, the organisation also provides essential support and advice in all areas of health and safety, planning, technical and regulatory issues.

“Initially the BAA was set up by Robert Durward, our chairman, as well as a number of other people he knew who wanted to establish an organisation that could represent the independent part of the quarry industry. Over nearly two decades we have grown from three starter companies to in excess of 70 members that operate around 200 quarries in the UK. We also have additional associate members who provide services such as plant to planning,” explains Trefor Evans, Officer of the British Aggregates Association.

As one of the oldest industries in the world, the UK quarry industry is also an integral part of the country’s industrial heritage. Extracting approximately 200 million tonnes of materials annually 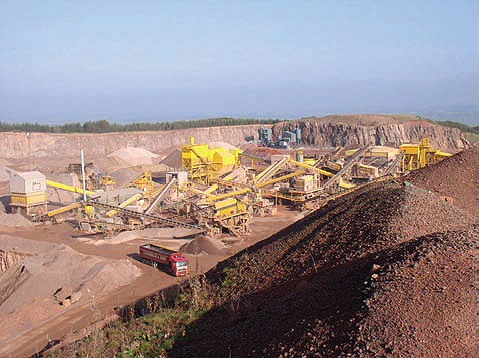 A strong supporter of local aggregate production, the BAA is proud of the quarry industry and is wholly committed to providing highly skilled support as well as direct access to top decision markets in government; it is also skilled in countering adverse comments from those who neither understand or appreciate the nature of the quarry industry and defending the industry as a whole. For example, the organisation is continuing its battle against the aggregates levy, a UK tax on the commercial exploitation of rock, sand and gravel that was introduced as an environmental tax in 2002 to encourage the recycling of aggregate. “We are still trying to take the government to court in The European Court over the aggregates levy, so the process is ongoing,” says Trefor.

He continues: “Another problem that our members face is that the system in the UK puts major companies in a position to employ their economies of scale and have whole departments that our members don’t have the resources for. This is where the BAA comes in as our members can’t afford to send people to all of these meetings so we represent them on issues and provide feedback; this is particularly important when it comes to legislation planning, European law and so on. By working with independent companies, we can counteract these issues, particularly against the major firms, to a certain extent.”

Alongside strong support from knowledgeable, passionate and experienced associates, members also benefit from a weekly newsletter and regular updates on all issues, access to the members only area of the BAA and CPA websites, and the option to attend meetings such as the annual seminar, AGM and dinner, and regular planning meetings. Members also get advice on moisture rebates, discounts and reliefs when it comes to the aggregates levy. Another major benefit of Membership is the award-winning safety accreditation scheme which is run by the Association and is has currently been awarded to more than half the quarries run by members. This is an ongoing scheme which more members are currently working towards and is independently verified and recognised.

“There is a broad range of benefits available to those who become a member. For example, small organisations, and I speak as someone who owned a quarry company and ran a number of quarries in Yorkshire, get help with planning issues,” says Trefor. “We also hold regular events such as BAA Annual Meeting and AGM and the annual Golf day; in 2017, we had a record number of delegates attending our annual meeting, with more than 100 people as well as 13 or 14 people with advertising space. It was a very full day, with around ten different speakers, many of whom focused on the topics of new rules regarding apprenticeships, which is something we are keen to get on board with alongside our members, as well as general planning issues However, the main keynote speaker was Lord Digby Jones, who gave an interesting speech on the state of the nation and the way he saw things going forward.”

Following the success of the BAA Annual Meeting in June 2017, the organisation anticipates a productive year ahead that is as full of opportunity for its members as it is challenges. “We don’t know what will happen when we leave the European Union, however we do know that the government is planning large-scale work in terms of houses and infrastructure in the UK. This should provide a great opportunity for our members, however we don’t know what the other side of the demand chain will be like post Brexit. Another issue is that although the government is keen to promote housebuilding, we don’t receive any real support when it comes to a managed aggregate supply system. There is a lack of joined up thinking and we are concerned there is a lack of government priority towards the aggregate industry. Looking ahead, we will keep abreast of any changes to legislation leading on from Brexit and keep our members informed and updated.”