Speaking with Ben Clark, Craig Hooper of CEMEX UK Aggregates asserts that adopting a process of continuous improvement is about transforming culture, not about dictating change

The desire to improve performance is a defining feature of any successful business and no more is this desire brought into plainer focus than amidst an economic downturn. The added pressures of having to cut costs and become more efficient become critical in order to remain competitive and ultimately survive. “An immediate knee-jerk reaction would be to lose your people and close the poorer performing operations down, and we at CEMEX have been through this cycle before,” explains Craig Hooper, UK Operations Project Manager at CEMEX. “It is a cycle that happens in all businesses from time to time, particularly when facing global economic crises, and we wanted to try and do something different that helped us sustain what we had, whilst remaining competitive in a difficult environment. Over the last five years we have kept operating cost increases below inflation year on year.”

All global organisations face the constant challenge of maximising the leverage of their intellect to unlock its true potential. Leadership, communication and engagement are at the heart of this and CEMEX’s UK business has turned towards continuous improvement (Ci) to tackle these challenges head on. “It’s easy to work out what you need and want to do as a business, but getting it into the 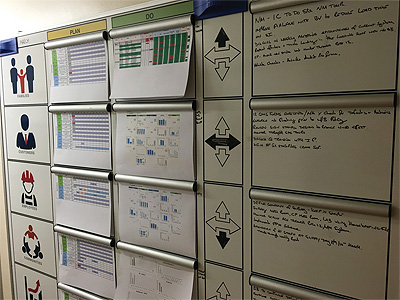 hearts and minds of everybody is always a challenge,” Craig continues. “It was important for us to move away from a confrontational, dictatorial style of leadership and culture to a more open, collaborative and communicative one, and in doing so bring the team together with a common goal and become more efficient as a company. At CEMEX everything we do is geared towards ensuring that we remain the supplier, employer and solutions partner of choice, so to this end we have a desire to continuously improve performance.”

The concept of Ci is often one that is applied to a manufacturing scenario – implementing incremental changes to improve factory efficiencies and overall productivity by micro managing KPI’s and transferring ownership of the results of each process element to the person doing the work. Perhaps the most well known example of this is ‘kaizen’, the Japanese word for ‘change for the better’ and is a culture that has been made famous by Toyota. CEMEX’s adoption of the process has centred on bringing that culture of change over to its own operations and in doing so has demonstrated its effectiveness within its own practices.

The first stage of sowing the seeds of this cultural shift was through an organisational redesign, whereby the old regional business structure was replaced with a flatter single UK aggregate business divided into commercial and operational functions. “Following this change we were able to embark on defining the path to deliver our business goals,” Craig highlights. “What better way to achieve this than to involve our people, listen to their ideas and then empower them to deliver. Our key focus was to keep it simple, involve everyone and make things happen fast and it was clear from the start that the line management structure was key to achieving this.

“The great thing was that none of us were, and still aren’t, Ci experts and this means that there are very few boundaries to what we see is possible and can be attempted. Everyone is raw and open to a new change mechanism, and by actively encouraging people to suggest and try new things, whilst making it okay to fail, we have faced very little resistance.” CEMEX has been able to deliver this under the umbrella of an internal brand, JUSTCi (Joined Up Strategy Through Continuous Improvement) where it has translated an off-theshelf lean toolkit into routines, systems and processes that can be applied to its own business. With 63 quarries and wharves and an average of ten people per site, compared with a large car manufacturing plant with hundreds of people, it faces a slightly different challenge in the way it needs to adopt Ci. For instance it has an open-minded approach to technology, such as using Whatsapp, to promote widespread communication.

Another key to achieving this change was in altering the management style. By bringing everyone on board, managers have become much more open with their teams who, in turn, are more willing to approach and discuss any issues they may face on a daily basis, exploring new ideas and discovering new solutions that can make working practices easier and more efficient. Critically, by creating these channels of discussion, the company has given its employees an outlet for suggesting a range of improvements.

Indeed, taking this even further, employees have also been given the power to implement many of these suggestions. Everybody is targeted to submit six ideas per year and each month a prize is awarded for the best submission. Key to turning ideas into action, the company only qualifies an idea once it has been proven. “Of course, there are some ideas that require large amounts of investment that we look at more closely before we give the green light, but this process has reaped massive benefits,” Craig says. “Many of these are things that we’ve either wanted to do for a long time but haven’t actively pursued, or were too obvious for us to notice, but by empowering a much wider pool of minds and skills, many ideas are now converted into reality very quickly.”

Whilst not every change has a direct financial value, Craig has been able to keep a running total of improvements that do, and each year the organisation is seeing upwards of three million pounds worth of benefits born from the implementation of Ci ideas system alone. One area where its effects have been particularly noticeable is in energy efficiency. “For as long as I can remember in the company we have known that we need to be switching lights off, fitting high efficiency motors to our processing plants, and improving our haul roads, which can lead to greater fuel efficiency and so on. We have known all these things but have never made a significant, company-wide effort to make them happen,” he explains. “Thanks to our JUSTCi programme we have been able to see significant improvements here by engaging people to take action.

“When it comes to our efficiency results I often get asked what is the single biggest thing we have done to achieve this and the answer is: ‘I don’t know.’ We can’t pinpoint the exact initiative, because hundreds of little things have been implemented and shared across our operations. I think this is the definition of Ci. You identify little things, you work out how to solve them, you run and monitor them and see if they can be improved even more, and then repeat. An alternative is to employ an expert or a consultant to point at things, write a list and say fix it, but this lacks the same 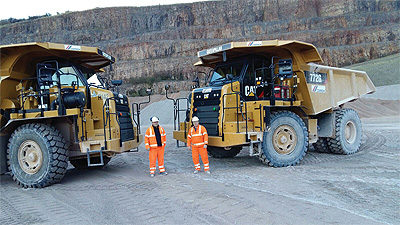 What is really noticeable of continuous improvement as demonstrated by CEMEX is the effect it has had not only on the company’s productivity, but also the change in the attitude of its people. The empowerment that has resulted from the programme has created a self-fulfilling evolution of improvement within the business, which Craig notes has led to a much more motivated workforce. Whereas before, few employees were keen to climb the ladder and put themselves forward for leadership positions, now that the management role has become more teamorientated, the company is seeing more and more people wanting to occupy these positions.

“Having a common purpose and a common goal has been a fantastic vehicle to bring people together. For CEMEX UK this is to be the best for our five key stakeholders (families, customers,employees, communities, shareholders) and the sense of ownership that ensues has had a big impact on employee retention, absence levels and in the way we interact with the customer,” he says. “Ci is a team sport, and involving everyone from site teams to managerial levels, and enabling collective brainstorming has been a revelation for CEMEX.”

The ways in which continuous improvement can be strategically approached and implemented are numerous. A vast pool of tools and programmes are widely available to utilise and follow, all of which are highly dependent on what kind of business it is, what objectives are in place and what resources are available as to how they are applied. However, it can be easy to fall into the trap of following a strict set of KPIs and to dictate change from the top following very little engagement with the ‘shop floor’. Those businesses that succeed with continuous improvement and clearly experience its benefits are those that, like CEMEX, have been able to align the change process with their own culture.

CEMEX approached change with a simple vision: to improve performance. And by doing so, without the inhibitions of expertise and foreknowledge of what is and isn’t possible, has successfully transformed its culture to one where all its employees are encouraged and empowered to make change where they see that change is needed. Whilst financially the bottom line has significantly benefited from the process, Craig is clear that the advantages have permeated even further by making the business a better one to work for, as an employee, and with, as a customer, and what better position to be in when facing the ever evolving challenges present within the industry.

CEMEX
CEMEX’s story begins over a century ago as a local cement plant in Northern Mexico. What ensued was a long and successful period of organic and acquired growth to become one of the world’s leading companies, today turning over around $15 billion thanks to the efforts of more than 40,000 employees. In the UK, CEMEX has been a key player in the market for over 80 years supplying an extensive range of products from concrete, cement, mortars, screeds and aggregates to asphalt, concrete block pavings, rail products, and bespoke precast and concrete blocks. Courtesy of 230 local mixing plants, 63 quarries and a large logistical capability CEMEX UK is able to deliver a complete range of marketleading solutions to meet every application throughout the UK by road, rail, sea and inland waterways. With around 3500 people operating within this network, the UK subsidiary generates close to £775 million in annual sales.