Continuous innovation, international growth, and strong focus on safety operation are the topics of the day at Engcon 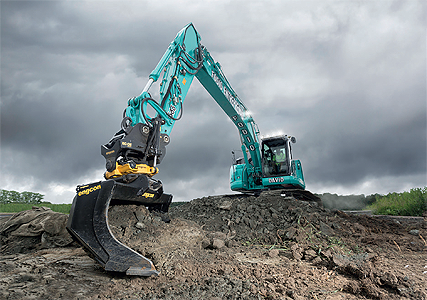 in 2019. Even if the global market feels a bit unstable, the company has continued to grow in the foreign markets it has been targeting in the last couple of years.

“France, the Netherlands, and the US are the main export markets for us and we have recorded excellent results in all three over the past 12 months,” enthuses Engcon’s CEO, Krister Blomgren. “The best of all, though, is the fact that there still exist plenty of opportunities in each of these. For example, our market penetration in the Netherlands is just 20 per cent, in France – ten per cent, and in the US – only one per cent. Nevertheless, we posted 100 per cent year-on-year growth in America last year. All in all, unlike our traditional markets in the Nordic countries that are now mature for us, the Dutch, French, and American ones contain huge potential in the coming years.”

Engcon’s expansion abroad ties in nicely with the growing global demand for excavators. “The vehicles are becoming more and more popular and they are increasingly being used as tool carriers to replace a lot of other machines,” Krister remarks. “The wider trend in construction sees builders trying to find ways to run their operations a lot more efficiently and that involves utilising multi-functional machines and mechanising the processes as much as possible. An example of this would be our collaboration with Kobelco in Japan. They definitely see the benefits of our products, but it will probably take the market a bit more time to pick it up. We have also had some very close collaborations with other excavator manufacturers such as Doosan and Hyundai over the last year, which has enabled us to better understand their needs and introduce them to our most recent developments.”

Historically, Engcon has become popular for its tiltrotators – the component that is often described as being the ‘wrist’ between the arm of the excavator and itsbuckets. In order to stay ahead of the game, the company works continuously on upgrading its ranges. “The key area we have sought improvement in the past year, was the swivel,” 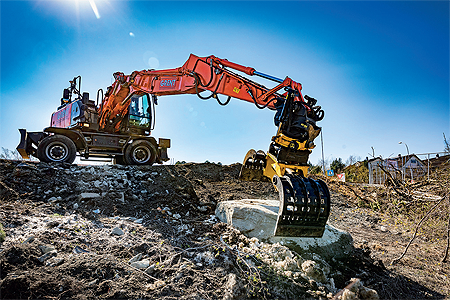 At the moment, Engcon is adding the finishing touches to the new swivel and it will be the company’s foremost priority to get the upgraded version up and running this year, before it proceeds with the release of several more components that can be attached to the tiltrotator. “We also have a new plate compactor coming up in 2020,” Krister reveals. “In general, we plan to release between three and five new products each year and while it is taking a bit longer to get everything done, we are confident that we will meet our own deadlines.”

Having faced an increasing demand for its products, Engcon took to investing in its manufacturing capabilities in the first quarter of 2019. The organisation spent some six million euros on a new production line, with a view to invest another four million shortly. “When we complete this major ten-million investment, we will be able to

Engcon’s updates to the tiltrotator improve not only the technical functionality of an excavator, but also contribute to the safety of on-site workers. The company has recently launched a global safety campaign called ‘Dig Smart. Dig Safe’, in which it promotes the use of smart technology to prevent workplace accidents. It is a noble and easy to define, yet challenging goal for the initiative – namely, to cut the number of accidents in the industry to zero.

To advance it, Engcon has developed the market’s safest automatic quick mounting system that warns with both sound and light alerts to stop an excavator from functioning in the event of an incorrectly coupled bucket or other tools. In addition, a driver must set the bucket down on the ground in order to release it at a given pressure. The automatic coupling of oil, electricity, and central lubrication also means that the driver can safely remain in the cab and change tools. The presence of a tiltrotator means fewer machine movements, which in itself reduces the risk of someone being hit.

“We have drawn inspiration from the automotive industry, which has added smart tools to enhance the safety of people on the road,” Krister comments. “It is important that we raise awareness of the workplace safety issues, which constitute a serious problem in the construction industry. We believe that some sort of a regulatory change is required, but it is also essential that everyone involved in the supply chain takes responsibility and strives to develop safer products. It has to be a joint effort by the entire industry and we hope that a lot of companies will follow our example and strengthen their safety credentials.”

To recap, Krister outlines Engcon’s targets for the months ahead. “Clearly, growing the ‘Dig Smart. Dig Safe’ programme is very important for us. It shows that we are industry leaders not only in product development, but also with regards to social responsibility. Of course, getting new products out also sits high on our agenda, and so does strengthening our position in the key international markets I mentioned earlier – the Netherlands, France, and the US.”