engcon, established in 1990 in Sweden, is a big group with business worldwide that primarily produces and sells tiltrotators and quick couplers for excavators
Encouraging innovation

engcon, established in 1990 in Sweden, is a big group with business worldwide that primarily produces and sells tiltrotators and quick couplers for excavators

During the first years of the business, the privately owned engcon was a very small company but today has developed into a group with a turnover of approximately SEK 700 million. The engcon Group comprises the trading names of engcon (attachments for excavators), Mählers (attachments for trucks and graders) and Drivex (attachments for wheel loaders and tractors), each of which is the market leader in the development of different attachment systems. engcon Group offers a broad range of high-quality attachments. The sales is handled by its own sales companies engcon Sweden, engcon Denmark, engcon Finland, engcon France, engcon Germany, engcon UK and a couple of prioritised distributors in Norway, Netherlands, Canada, Italy. It also utilises dealers across the world to access other markets. 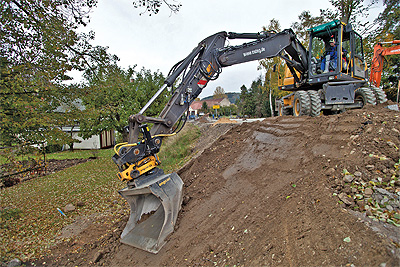 The main product, tiltrotators – a wrist on the excavator is developed for one to 32 tonne excavators and a large range of similar compatible products. All products together create what the business refers to as ‘system engcon’, the complete solution for an efficient excavator.  The company was awarded an International Innovation Award for its Q-Safe lock technology at the GaLABau exhibition in Nuremburg, Germany in 2014. Commenting on the benefits and importance of the product, Krister Blomgren, CEO says: “Q-Safe provides threefold safety, thanks to hydraulic locking with non-return valve, mechanical locking function and electronic monitoring. With Q-Safe, the operator simply cannot connect the tool incorrectly or release the bucket by mistake. This eliminates ‘the human factor’ as a cause of accidents. Another advantage is that Q-Safe fits all excavators and control systems on the market. The innovation award shows that we are on track in terms of our safety and is one of many products in our concept ‘non accident generation’.”

There are several other products produced by the company that have played a large part in getting the business to where it is today. This includes EC-Oil, engcon’s system for hydraulic and electrical connection of hydraulic tools and attachments, specially adapted for the security coupler Q-Safe and the new series of tiltrotators. “We also have a product DC2, which is our stepless proportional control system for tilt rotators that allows the operator to control the tilt rotator very smoothly. DC2 was developed using the latest technology, Microprop DC2 which also offers remote support. Following the indication of a fault, the operator contacts the remote support, which then takes control of the system via a server link and an app on a Smartphone,” explains Krister in some detail. 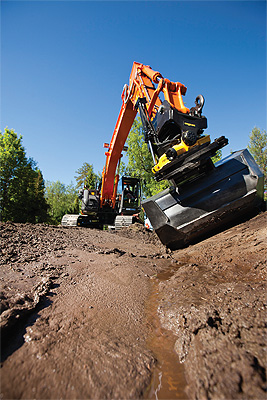 A third product, the Mig 2, is the new generation of joystick that can be fitted with three rollers and seven buttons, or a total of six rollers and 14 buttons on two joysticks. When used with the Microprop DC2 control system, all the rollers can be operated simultaneously. This combination of Q-Safe, EC-Oil and DC2 on engcon’s new generation tiltrotators (Gen 2) gives the operator the absolute best solution on the market. “We sell our products via distributors and dealers but we are very focused on establishing good relationships with the ‘end-users’. This ensures that we have a very good sense of what they need for the type of product in order to perform their missions in the best way,” says Krister. engcon has developed many new and effective products in the past five years, such as the second-generation tiltrotators, Q-Safe, and EC-Oil, and it has greatly increased the level of product sales, recording a 30 per cent increase in 2014.

The largest share of customers is found in the Nordic countries and the rapidly growing markets of France and Germany. The spread of interest in its services is a result of the many strengths that hold the business in a competitive position in the market. “Our biggest strength is that we listen to our customers and help them become more profitable in their work. We do not manufacture our products for our own sake, it is for our customers, and because of the relations with the customers we have innovated products that help the owners and drivers of excavators,” points out Krister. Being part of a large group allows the company to offer a wide range of products and in addition the knowledge within the organisation can be interchanged between departments, providing customers with an unbeatable service.

In the Nordic countries the tiltrotator is standard on almost all excavators from three to 30 tonnes. The goal of the company is to promote the product range to the rest of Europe so that it may discover the benefits in the coming years. “As the world’s largest manufacturer of tiltrotators we will continue the work of developing the product line to make our customers even more profitable. Our strategy as we move forward is to continue to grow on the outside of the Nordic countries and we have now recruited more staff in Germany and France. The new organisations are now working methodically to build their customer bases through dealership. We are building a broad service network in parallel with selected service partners, which gives our customers a further degree of security in owning engcon’s products,” concludes Krister

Services: Produce and sell tiltrotators, quick couplers and other attachments for excavators