Celebrating 50 years in business in 2014, Hughes and Salvidge has built up a vast range of experience in demolition, crushing and recycling
The demolition men

Celebrating 50 years in business in 2014, Hughes and Salvidge has built up a vast range of experience in demolition, crushing and recycling

Today one of the UK’s leading decommissioning companies, Hughes and Salvidge now includes K&B Crushers, Aasvogel Waste Management and H&S Metals, and together these companies offer clients the complete solution for their demolition, crushing and recycling needs. 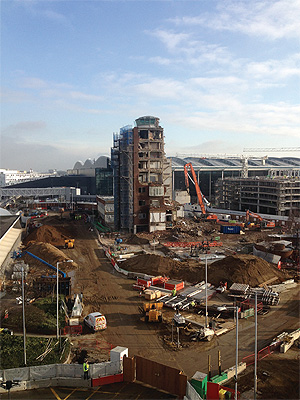 Back in 1964 when it was founded, Hughes and Salvidge focused on decommissioning and demolition. It was in 2008 that it acquired K&B Crushers, and began to expand its portfolio of services. At that time, Martyn Burnett was K&B’s founder and managing director, and the year after the companies merged, he took over the helm at Hughes and Salvidge, and became MD of the newly formed, larger organisation.

It was Martyn’s vision that led to the next acquisition in 2010, and he explained the reasoning behind it: “We hit the recession and every month a large part of our cash flow was being taken up by using contractors to get rid of our waste from demolition. Therefore, I thought it would really benefit us to buy our own waste business, as it was a large part of what we did. As a result, we bought a company in Oxford called Aasvogel Waste Management and added that to the Group. That was extremely successful, and then in 2011 we started our own metal recycling company, called H&S Metals. That way we could offer a complete service.”

Acquiring the waste business turned out to be a brilliant strategic decision and Martyn credits that with increasing the company’s size. Over the course of three years, Hughes and Salvidge went from an annual turnover of £8m to £25m, and this was during the recession when construction companies across the country were struggling. In addition to services already referred to, the business also now works in areas such as asbestos removal, decontamination and industrial cleaning and land remediation. By having the crushing, waste management and metal recycling all under its control, Hughes and Salvidge can ensure any waste sent to landfill is kept to an absolute minimum. Added Martyn: “We bought the waste business so that we could offer a complete service, but in fact our different companies can also all help each other out, as they are all complementary.”

While this range of services offers benefits to clients on its own, it is supported by a company ethos ofreliability and quality, and a focus on health and safety. “I would say what really sets us apart is our hands-on approach,” Martyn noted.“I am personally on-site much of the time and although we employ 158 people I know everybody’s name. I think that kind of rapport and management support really makes a difference.” 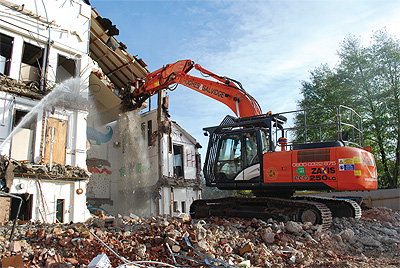 He continued: “This also ties into our reputation for health and safety. It’s one of our central tenets and I personally believe in it very strongly. We undertake a lot of education and won’t have anyone on site who isn’t CPS trained. I also don’t believe in sacking staff for making a bad mistake in health and safety – we take them right back to the beginning of their training, to change behaviours and instil the right way of working and the reasoning behind it. It is now second nature to most of our guys, it’s something that has been bred into the company, we don’t cut corners and won’t take on a job if it requires shortcuts that could cause someone to get hurt.”

Thanks to this approach, Hughes and Salvidge has been involved in some highly prestigious contracts and long-term relationships. “We have been working with Heathrow airport for 15 years, and that evolved from one man with a wheelbarrow to the demolition of the old control tower in 2013, which was a flagship projectfor us,” said Martyn. “In 2011 we undertook a large demolition of the old Outokumpu Stainless facility in Sheffield, which was handed back six weeks ahead of schedule. We have also worked with TOTAL Petrochemicals, UK Power Networks, Sheffield Hallam University and Ordnance Survey in Southampton, where we delivered the demolition of the landmark selection of buildings in the city.”

Expansion
It is clear that Hughes and Salvidge has evolved into a significant service provider, and going forward Martyn wants to further grow the waste management side, in order to expand its geographical coverage. “I would like to acquire another waste business, but I also want to preserve what we have got and maintain our quality rather than try to hugely increase our turnover. I expect that the next few years will see us consolidating our position.”

He concluded: “Hughes and Salvidge might not offer the cheapest quote, but thanks to the years of experience of our handpicked team, we are very good at what we do. Our clients can always be confident that any job we undertake will be done safely, properly, and delivered on-time.”