Skip to content
You are here:Home » Kodumaja AS
Insights
6 min read

With two decades of proven industry experience, Kodumaja has established a reputation as a leading manufacturer of prefabricated modular units throughout Norway and beyond
Working together

With two decades of proven industry experience, Kodumaja has established a reputation as a leading manufacturer of prefabricated modular units throughout Norway and beyond

Since its formation during 1995, Kodumaja has simultaneously represented a brand trademark and the name of a group of companies specialising in the construction of high-quality housing using modular fabrication techniques. Through the implementation of its effective and future-orientated construction method the company ensures that all of its completed projects conform to the various construction requirements and standards within its strategic markets. 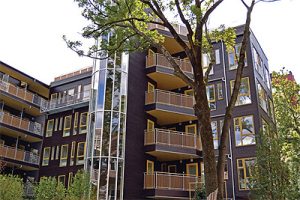 Presently 96 per cent of the housing built by Kodumaja is constructed in the Nordic countries, mostly Norway and Sweden, but also Denmark and Finland, while the remaining four per cent is built within the Estonian region. As of December 2015 the company had completed more than 6000 apartments and houses to the satisfaction of its clients. Typically the modular units produced by Kodumaja have a minimum set service life of 50 years, set by industry legislation. Kodumaja however is dedicated to exceeding the standard level of quality expected by its clients and providing structures that with the correct maintenance, will endure for much greater periods of time. Through this commitment the company is dedicated to becoming the market-leader in its line of business within Europe. “We have made significant investments in our business and today we have the technical capacity to increase the turnover of the company to €100million per year,” reveals Chairman, Lembit Lump. “The export turnover of the company during 2015 was 56 million euros.”

The fabrication process employed by Kodumaja incorporates a number of features that translate into critical advantages when the erection of structures commences on site. The manufacturing process relating to the modular components of the units is undertaken at the company’s factories in Estonia. Kodumaja prefabricated modules are closed elements, meaning that most of the work on the units can be completed in-house. All doors and windows are fitted in the facility and 95 per cent of the interior finish is completed including all of the unit’s internal plumbing and electrics. The nature of this construction process allows the units to be shipped straight to site upon completion. Once there, they can be immediately unloaded onto pre-constructed foundations in quick succession. In general it takes between 20-60 minutes to install one individual module, translating to 15-30 modules per day, making the onsite construction process impressively quick and efficient.

Within this environment, variables like weather conditions, which can cause timing and material issues on traditional construction sites, are eliminated. Therefore production does not depend on weather conditions, the fabrication process is simple and easily controlled and conditions are optimal for quality control and management. This construction method is highly efficient and allows Kodumaja to offer clients shorter construction times and reduced costs. For example, the factory production of components on site enables a large amount of the work force to operate simultaneously. Furthermore, when combined with the simultaneous construction with onsite foundations and utility lines, the factory production of components greatly shortens each project’s general construction time and minimises mixed overheads. 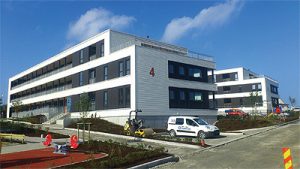 Since the company was last profiled in Construction & Civil Engineering magazine during April 2015, Kodumaja has completed the construction of the world’s tallest timber building located in Bergen, Norway. BOB Eiendomsutvikling AS ordered the impressive structure, known as ‘The Tree’, with planning and negotiations beginning during 2011. Kodumaja began work on the 14-floor, 62 apartment building during summer 2014 and the 4500m2 structure finally opened in December 2015. “We consider working with partners from a very early point as the best way in order to get the most efficient and best possible final result,” Lembit says referring to the technically demanding project. “It is not difficult to build a 14-storey residential building, but it is certainly challenge to build a 14-storey wooden house, while ensuring adherence to all of the requirements and standards that are in force. However, we work on behalf of our customers to offer high quality products that meet all state-of-the-art requirements and we like challenges.”

Kodumaja employs a core of more than 500 highly dedicated staff that enables it to maintain a focus on flexibility and a readiness for the implementation of one-of-a-kind projects at competitive rates. During its 20-year history the company has amassed greater experience when compared to competitors in the design and manufacture of large multi-storey projects, through the development of structures including factory produced four and five storey apartment buildings. This extensive scope of delivery allows Kodumaja customers to solve several operational challenges at once, through a single supplier.

During 2015 the dedication of the company was rewarded, when Kodumaja was awarded the title of Estonian’s Company of the Year by the President of the Republic of Estonia, Toomas Hendrik Ilves. Kodumaja was selected as Company of the Year from a shortlist of 400 companies. Several criteria were considered in deciding a victor, including economic indicators, coping with complicated economic environment, contribution to creation of employment, activities towards export and contribution to society. Estonia’s Company of the Year award was established in co-operation between the state’s provide and public sector to promote entrepreneurship and recognise the best Estonian companies. Estonia is presently the leading exporter of wooden houses throughout Europe, with the majority of Estonian wooden houses destined for the Kingdom of Norway, followed by Germany, England, Sweden and France. Some 140 companies are presently active within the wooden building sector, generating a combined export turnover for 2014 of 238 million euros.

Further to the acclaim of Estonia’s Company of the Year, Kodumaja was also acknowledged as the region’s Exporter of the Year, solidifying its position as a market-leader. Throughout 2016 and beyond, Kodumaja will focus on the continued expansion of its business within the company’s key markets, as well as exploring new possibilities for further growth and expansion. “Today we consider our strategic markets to be within Norway, Sweden, Denmark, Finland and Estonia. During the last couple of years we were focused mainly on Norway and Sweden and the same focus will apply over the coming years. Our final target is to split the risks more between our markets to lower the company’s dependence on Norwegian market,” Lembit concludes. “Norway is a generally good and active market for Kodumaja, however the Swedish market also looks very promising now. It is very active – almost booming. Our challenge is that we are not as well known in Sweden as we are in Norway, it takes time to establish a brand in a new market and we are working hard in that direction.”