Copenhagen’s harbour revitalisation
Enhancing Copenhagen’s waterfront and its reputation as the world’s best city for cycling, the elegant Lille Langebro cycle and pedestrian bridge has been completed. By international architecture practice WilkinsonEyre, the 160m opening bridge across Copenhagen’s Inner Harbour was won in a competition for Danish client Realdania By & Byg.

Now gifted to the municipality of Copenhagen, the bridge crosses the city harbour next to the new BLOX building and seamlessly connects the vista down Vester Voldgade from the City Hall to the harbour and on to Christianshavn on the Langebrogade quaysides.

The bridge follows an elegant curve in plan, and the structure is arranged as two wings on the sides of the bridge, defining a very acute edge dividing light from shade. This edge dips below the decks at the abutments and soars up above the deck at midspan. Finally, the graceful curved profile of the bridge becomes broken when the two swinging sections open for marine traffic.

Working in collaboration with engineer BuroHappold, WilkinsonEyre’s design for the opening mechanisms are discretely concealed in the piers and opening structure allowing the flowing line of the bridge to run uninterrupted from end-to-end. 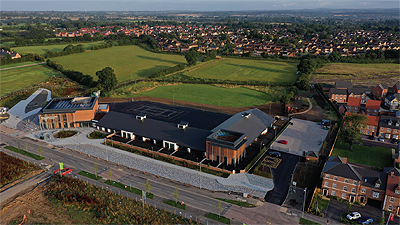 Work has completed on the first £7m primary school at the pioneering New Lubbesthorpe development in Leicestershire. The 420-pupil school will be one of three on the £1bn new community. It sits on Tay Road at the heart of what will soon become the development’s central square, where further shops and community facilities are planned.

The school building has now been handed over to Leicestershire County Council, which has appointed the OWLS Academy Trust to run it.

Designed to complement the adjacent residential development, the school was built by Clegg Construction, on behalf of the Drummond Estate. It follows the delivery of a new £15m motorway bridge offering greater connectivity and the first phase of 500 homes.

The architects were GSS Architecture and the project is being managed for Drummond Estate by Bentley Project Management.

Support for Whaley Bridge dam
News channels have been reporting on the operation to prevent the collapse of the dam wall at Toddbrook Reservoir in Whaley Bridge – and Xylem Water Solutions UK was involved in the efforts, through the provision of pumps to drain the water and its rapid engineering response ensured a successful operation.

The wall of the reservoir dam was at serious risk of collapse after days of torrential rain led to what police called an ‘unprecedented, fast-moving, emergency situation’. Xylem worked with SLD Construction and Kier, the main contractor for the Canal and River Trust (CRT), which runs the site, to achieve a positive outcome.

The water technology company deployed five 55 Kw 2250 Flygt submersible dewatering pumps to draw water out of the reservoir at a rate of 250 litres per second. Within a week the water levels had been reduced by more than ten metres and the town’s 1500 residents were allowed to return to their homes. 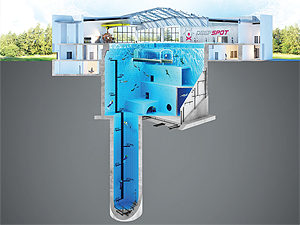 CEMEX, S.A.B. de C.V is participating in the construction of the deepest and largest diving pool in the world – the ‘Deepspot’ – built near the capital city of Warsaw, Poland. CEMEX is supplying special cement for the implementation of this complex project, from its Rudniki cement plant near Częstochowa, Poland.

The pool will be 45 metres deep and accommodate 8000 cubic meters of water – 27 times more water than a standard 25-metre pool. In addition, the complex will feature a special underwater tunnel, which will allow visitors to observe people training at the deepest depths.

Record-breaking bridge
Arup and Dr. Ing A. Aas-Jakobsen AS (Aas-Jakobsen) have been appointed to carry out the independent design verification for the Çanakkale Bridge in Turkey, set to become the world record holder for the longest suspension bridge in history. The record breaking length of 2023m and tower height of 318m will connect the Asian and European continents as part of a new highway between Kınalı and Savaştepe.

The team will collaborate to overcome highly complex geotechnical engineering challenges due to location of the bridge being in a seismic zone and also requiring increased aerodynamic stability for safety.

“The record span explores the boundary of current suspension bridge design. We are very pleased to be part of this project and contribute with our expert knowledge in aerodynamics, suspension systems and deck structure for long span bridges,” says Svein Erik Jakobsen, head of the bridge department at Aas-Jakobsen. 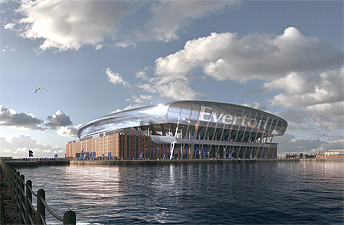 Business leaders from all sectors across Liverpool City Region have pledged their support for Everton’s proposals for an iconic new stadium on the River Mersey and the Club’s plans for a community-led legacy at its current home at Goodison Park.

The city faces a transformational once-in-a-generation chance to deliver new opportunities and new jobs with the creation of a new stadium at Bramley-Moore Dock and provide a further boost to north Liverpool with a large-scale community-regeneration project in Liverpool 4.

Leaders from multiple organisations support what has been called The People’s Project – Bill Addy, chief executive of the Liverpool BID company, which represents the interests of more than 1500 businesses in Liverpool city centre, is one of them. He said: “This is a transformational opportunity for the city particularly in the north and it will be the catalyst for its redevelopment, the city’s expansion, which creates jobs and will bring the Mayor of Liverpool’s inclusive growth programme into play in the north. The People’s Project fuels that drive not just for Bramley-Moore but also for the Goodison legacy.”