Occupying a leading position in the UK modular construction industry, Premier Interlink is focused solidly on growth
A modular approach

Part of the Waco International Group, Premier Interlink can trace its trading roots back almost 60 years. After the merger between the Premier Transline and Interlink brands in 2004 and the acquisition of the IP of Britspace in 2011, the company has now positioned itself as one of the leading modular construction companies in the UK. Construction and Civil Engineering last featured Premier Interlink in October 2014 when divisional director, David Harris discussed the recent growth the company had experienced due to its focus on innovation. A little over six months later the positivity remains, and Premier Interlink is very much focused on growing its business in all sectors.

“From a general business point of view, the company has continued to grow quite strongly over the last six months,” David says. “Over this period there has definitely been some real buoyancy in 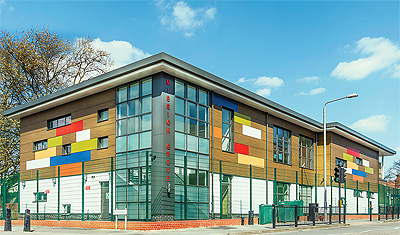 the market,” he adds. “I think the initial impact for us is in our Hire Business because as bigger developments move forward we are providing the temporary accommodation. One of the key advantages we have is that our hire fleet is completely interchangeable – we deliberately have one focused fleet, where all the units can be sited together, so we can utilise them very well. We have spent capital expenditure up to 300 units in the last six months and we’re currently waiting for Group Board approval to do the same again. That has been a strong, self-funded investment into the business.”

Ultimately, Premier Interlink has established a reputation as a quality brand in the market, something it is committed to maintaining by being selective of its projects, competing for quality and longevity. Aside from this the core strengths of the business lay in the unique and innovative approach the company takes towards both its products and its operations. “You can see we are a very innovative business from some of the products that we have launched to the market,” comments David. “We are not just a modular building company, we are very much focused on delivering a solution, so we try and look at schemes and work out the best way to deliver that solution rather than just seeing how we can make it fit modular. We’ve developed unique solutions for the MoD, education, housing and retail markets.” In terms of operations David explains: “We employ manufacturing people to run the factories and we employ construction people to run the sites. It’s the skill of blending those two together that gives us a competitive edge.”

In the last feature David concluded by expressing the company’s desire to break into the housing sector and over the last six months the business has made significant progress in this market, with its first project for the Goodwin Trust in Hull well underway. “We initially started talking to Goodwin two years ago, the work we did with them then was one of the key drivers for going into the housing market, it was then that we realised its potential. We have developed a housing product to suit the needs of the social housing sector. The project consists of code five homes, so they’re 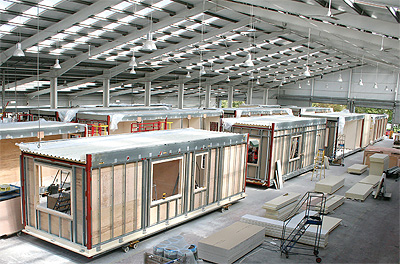 environmentally friendly, very sustainable and aesthetically very modern. From our point of view we really believe it will be a springboard into a number of other housing projects.”

In November last year, the company held a three-day launch event, inviting 150 people from the industry to visit its factory and view the demonstration housing product. “From that we have generated huge interest in the product. We’ve actually got a pipeline of well into the hundreds of millions of potential social housing opportunities. Now we’re trying to work with the right opportunities, we want to pick a few sites of 20 to 30 houses and really demonstrate our abilities,” explains David.

Other sectors, which are proving strong for Premier Interlink, are education, student accommodation and healthcare. “Our biggest sector over the last 12 months has continued to be the education sector,” notes David. “We’re either in the process of, or have completed, over the last two months, eight different schools in London. I think the interesting part is that they’re all quite complex and niche products.” It has also just completed its second student accommodation contract, a 240-bed, five-storey building for Northumbria University. “This sector is really ideal for us as it includes a lot of repetition so we can drive efficiencies through the factory, manufacturing around 25 units a week.” The company has also made a strong return to the healthcare sector with two contracts won for Pilgrim Hospital in Boston and Springfield Hospital in Chelmsford.

As Premier Interlink continues to grow it does face a number of challenges, including employing the right people for the construction, commercial and design sides of the business, and continuing to attract capital expenditure into the business. Despite this David is still very much focused on what the business needs to do to maintain its growth, and has his eye trained on other sectors where opportunities exist. “The next 12 months for us are about investing into our Hire Business, driving the housing product launch further and also implementing a push into the retail sector,” he concludes. “I think our strategic vision is clear that we want to become the premier modular and offsite builder in the UK and it’s very focused on the growth areas. Ultimately, we intend to continue trading in each of our chosen construction sectors because we believe the products have benefits in all of them.”