Scaling up for the future

As the Barrow-in-Furness redevelopment programme at BAE Systems’ state-of-the-art submarine shipyard makes good progress, Programme Director Allan Day speaks to Ben Clark about some of its major challenges as well as its key successe

As the Barrow-in-Furness redevelopment programme at BAE Systems’ state-of-the-art submarine shipyard makes good progress, Programme Director Allan Day speaks to Ben Clark about some of its major challenges as well as its key successes

The Barrow-in-Furness shipyard, based in Cumbria, has existed since the 1870s as a world-class submarine site. Since 1963 it has been responsible for building all but three of the Royal Navy’s nuclear-powered submarines and as such has been maintained as a cutting edge facility. With the current Astute programme ongoing and the Successor programme gearing up to potentially replace the Vanguard class submarines, a major redevelopment scheme worth in excess of £300 million is currently underway to modernise and facilitate the extra capacity. Construction & Civil Engineering spoke to Programme Director at BAE Systems Submarines, Allan Day, who discusses the progress of the eight-and-a-half year plan as well as some of the challenges that are being over come. 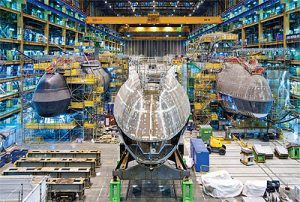 “Overall the project is made up of numerous individual schemes constituting a mixture of civil facilities, large engineering workshops, marine installations and a range of other boundary buildings within the nuclear-licensed site. So it’s a very diverse project,” he explains. “As a key enabler, not only for the delivery of the potential Successor submarine programme, but also the legacy capability for the shipyard long into the future, this is an incredibly significant programme. It is also the biggest investment the shipyard has seen since the 1980s when the Devonshire Dock Hall (DDH) was built, so it’s a once in a generation investment.”

The project is currently around two-and-a-half years into its schedule with all the planned projects past the concept design stage, with some already mobilised on site. Atkins leads the project from a design point of view, whilst Costain, Shepherd (now part of Wates Construction) and Morgan Sindall hold the main framework contracts. “The strengths of bringing these three main contractors together on the programme is the requisite capabilities, track record and experience they bring, all underpinned by the safety culture necessary to deliver this vast programme over the time frame,” notes Allan. “This part of Cumbria is not used to such large investment so we recognised that we needed a strong strategic framework that would support this. These organisations were able to work closely and have early engagement with us to support the project’s entire development.”

One of the first major projects to have started construction in 2015 was the Central Yard Complex (CYC). At 45 metres high, 170 metres long and 90 metres wide it will be the tallest building on the site when completed and only a third smaller than the already immense DDH. It is also the largest of this current build programme. Designed as a state-of-the-art manufacturing facility the CYC is scheduled for completion sometime in 2017.

“In order to get ahead of the game and mitigate the challenging weather conditions that this coastal site is submitted to in the winter we began the groundworks and enabling works at the beginning of August 2015,” Allan outlines. “This has involved demolishing previous facilities, such as the old boiler shop, to make way for the modern development and has involved around five months of excavating an area 90 metres wide and twice as long in length to prepare the ground for piling rigs, foundation masts and so on.”

Despite the site’s long history this phase of the development didn’t experience any major contamination and has been completed in time for major construction works to begin. In total around 51,000 cubic metres of materials were removed from the ground, most of which was recycled and reused as graded material, minimising environmental and transport impacts. Testament to their expertise, Allan praises the collaborative innovation undertaken by the designers and contractors in achieving this.

In October 2016 the first of the projects to be completed is due for commissioning just outside the main shipyard. The 28,000 square metre strategic bulk store will be a key logistical facility distributing materials to and from the main manufacturing hubs and is currently in the advanced stages of construction. “The main structural steelworks are up and over half the cladding has been completed,” Allan says. “This is on-time and on-budget so our stakeholders are very pleased with progress.”

Around the same time work will also begin on adding a significant extension to the DDH, which will provide additional manufacturing capability, plus office accommodation and workshops for over 200 extra people. Allan also highlights a state-of-the-art paint spray facility that is due to start in 2016 as well alongside a number of refurbishment projects to make use of existing facilities in a cost effective manner. 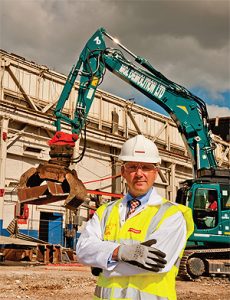 Operationally the Barrow-in-Furness shipyard continues to focus on the current Astute programme as well as readying itself for the potential Successor programme. This poses the development team its biggest challenge as it enters some major construction phases over the coming months. “It is the closest a construction project can get to open heart surgery,” Allan expresses. “At its peak we will potentially have 850 contractors on site, in addition to the 7000 employees already working here. It’s a massive task where we have to look at the three individual programmes together and ensure that we can fully integrate the logistics so that they can work side-by-side, harmoniously and with no conflict between them. However, whilst this will be one of our biggest challenges over the next five years, the intensity of having so many people working here at any one time creates an excellent opportunity for employment.”

Opportunities for employment are not only of benefit for the development programme itself, but also the local economy and the BAE Systems team have made it a clear remit of theirs to make sure it engages with the surrounding communities in the best way possible throughout the project. “Part of our down-selection for framework contractors was an evaluation on their approach to Corporate Social Responsibility,” Allan continues. “All three evidenced their commitment to this and it is now manifesting itself in tangible benefits on the ground.”

As part of the focus, framework partners are appointing apprenticeships through the local college to provide unique knowledge and experience on the site, and 30 to 50 per cent of the employed workforce is coming from the local area. The organisations are also providing their services to the local schools. In 2015, for example, the team rejuvenated part of a local infant school’s grounds, creating a secret garden for the pupils. Regular local briefings, a public information centre and a dedicated webpage have also all been set up to ensure that the local communities are engaged with, fully informed and kept up-to-date with ongoing and planned works. Allan also points out that numerous supply chains have been formed from the local economy, and the number of associated visitors to the area has provided a boost to local businesses and amenities.

This focused commitment to responsibly operating also manifests itself in an exemplary health and safety policy on site. “Between us and the framework partners we have developed a programme-wide SHE Charter, which is people focused and is very much about a leadership and behavioural-led approach to safety,” says Allan. “This is implemented by encouraging people to share best practice with their partners and also by regular meetings at both a programme management and director level. This way we can continually assess the logistics and actively review onsite performance from a design, buildability, implementation and also an end-user point of view. It is absolutely the first item on any agenda, is non-negotiable and to date our AFR is still at 0.0 per cent.”

The Barrow-in-Furness development is undeniably large in both its scale and its impact on the site’s future. Over the course of 2016 construction will be in full flow with a total of five major projects ongoing simultaneously before the year is out, meaning that many of the commitments already highlighted here will become even more important. Ultimately it is clear that BAE Systems and its partners will continue throughout the remainder of the programme with an integrity and excellence already demonstrated by early works and its responsible approach to the people both on and off site.