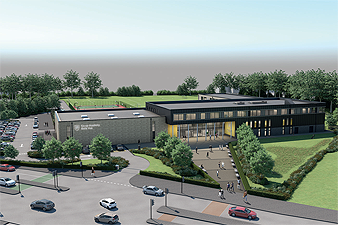 Leading North East practice Space Architects is celebrating 20 years of designing schools, with the submission of plans for its 85th building, a multi-million pound school in Hyde, Greater Manchester.

The firm’s first secondary education project in the public sector was Blyth Community College, which opened in Northumberland in 2002. Since then, it has delivered eight schools for Gateshead Council, ten for Dumfries and Galloway Council in Scotland and five schools on the Isle of Wight, as well as facilities in Sunderland, Knowsley and Hull, amongst others.

Planning permission was submitted for the new multi-million-pound Belle Vue Academy – a secondary school accommodating 1200 students and up to 70 staff and sponsored by Co-op – in January. The school provides over 57 teaching and community spaces including an auditorium, dining areas and sports hall, in line with the Department for Education’s baseline designs.

The 85 schools across the UK designed by Space Architects include primaries, secondaries, special and free school schemes, totalling £800 million in design and build over the past two decades.