Back to Features > Time for change

Is Coronavirus the catalyst construction needed to make the most from digital? Richard Waterhouse reports

Is Coronavirus the catalyst construction needed to make the most from digital? Richard Waterhouse reports

Building sites are opening up, albeit piecemeal, which will be a relief to many. Manufacturers are also re-starting some operations. However, these green shoots of the industry will grow in very different conditions. This is essential, but will come at a cost.

Several opportunities that existed in early-March are still here. With HS2 work commencing imminently, the prospect of more employment and the promise of considerable investment into the industry, there are a few reasons to be cheerful. There’s no doubt the government is acutely aware of the long-term impact the last recession had on the construction sector.

On the other hand, challenges persist. We will exit the pandemic in the midst a housing crisis, with an ageing and unrepresentative workforce, lack of skilled workers and potential staffing challenges, exacerbated by the new visa system. Beyond this, there have been recent (avoidable) failings in construction industry culture which have led to tragic and unnecessary loss of life. These problems remain as the country gradually opens up and will get worse the longer they remain unaddressed.

One positive result of the current shutdown could be a more concerted move to a technology-first culture across the construction industry.

The European Investment Bank said, “the Coronavirus pandemic is becoming a tipping point for digitalisation – the dawn of a new era – by accelerating the maturity of digital technology; what was once a ‘nice to have’ could now become a ‘crucial to have’”. Its recent report identified construction is lagging behind other sectors in digital adoption.

Since the 2009 recession, construction has been caught in a tedious cycle of low productivity, under-investment and low innovation, coupled with wafer-thin margins. This is the time for reinvention of the industry.

Tech forward
Digital is central to unlocking this trapped potential. The architectural and engineering professions have been leading the switch with the rapid uptake of BIM. So, their people can be productive at home, the shutdown has forced many engineering and architectural practices to move to cloud-based tools.

Digital tools improve standards, reduce mistakes at every stage and improve record keeping and auditing. This keeps costs down, builds on schedule and drives up standards. The UK’s Get It Right Initiative (GIRI) reports that 21 per cent of construction costs are due to error. With the sector’s tiny profit margins, reducing mistakes looks like a simple way to increase profitability.

Needs must
The UK government identified the benefits digital can deliver and supported it with its BIM Mandate which made technology use a criterion for bid wins. This compelled technological adoption within the design stages. Yet, the pace of adoption has slowed.

The Building a Safer Future report identified a requirement for a ‘golden thread’ of information. Updated throughout a building’s life, and in use from design to occupation. An accurate and real-time record of what has gone into a building, how it was installed and maintained. All this in a digital workflow, recording decision making throughout. This is a crucial development, encouraging transparency and accountability. Siloes will break down and information will move seamlessly.

Right now, the ‘golden thread’ is an aspiration.

Roadblock ahead
The Centre for Digital Built Britain recently released its report on interoperability. This is a welcome look at a real sticking point. Today, there’s frustration across construction. Files need reformatting, cut and paste is part of the grind. It’s still too hard to move information without losing data, thus risking costly mistakes.

For technology providers to innovate, they need clear guidance and the push of government-mandated standards. The technology sector can then establish clear interoperability approaches, allowing software ‘a’ to talk to tool ‘b’, so that data can flow freely.

One example of a helpful standardised approach is Uniclass 2015 (authored, published and maintained by NBS). It is a consistent classification structure for all disciplines in the construction industry. It contains tables classifying items of any scale from a large facility such as a railway, down to products such as a CCTV camera in a railway station. It is the classification system listed in BS EN 19650-2 for information exchanges on BIM projects. This allows for information to be organised and managed, having a standard classification makes interoperability easier.

Changing laws
The government has said forthcoming new laws will be 5the biggest shake-up of building safety for a generation. Speaking at an NBS event in February, Dame Judith Hackitt, Chair of the Transition Board to establish the new Building Safety Regulator, sounded a clarion call to the sector earlier this year, making it clear standards, processes and the digital toolkit must be improved.

Hackitt expressed her frustration with the lack of progress since the Grenfell Fire. She emphasised the forthcoming regulation would be robust and lead to a radical change in culture and processes. These will need standardised systems, a more collaborative approach, including adopting a transparent attitude to data sharing.

Perfect time to go digital
C-suites across the country will be looking at what can be done to drive up profitability. The speed at which many companies have started using new tools, will result in further investment. Especially, when incoming regulation is thrown into the mix. 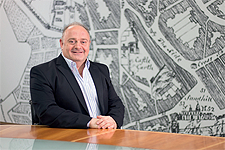 They won’t regret it as productivity picks up and errors reduce.

Richard Waterhouse is CEO of NBS, a global leading technology platform that combines the best content and connectivity for anyone involved in the design, supply and construction of the built environment. It is also the government’s official publishers of building regulations. Headquartered in the heart of Newcastle upon Tyne, UK, NBS has a global reach via its permanent bases in both Australia and Canada
For more information, please see www.thenbs.com