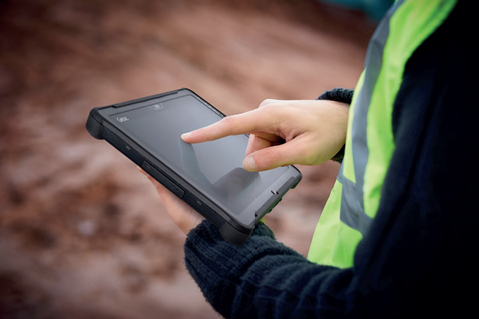 The construction industry is well known for its highly physical working conditions, particularly for those who are regularly required to be on-site with customers or conduct/oversee new building projects. In the past, building sites themselves were predominantly paper-based environments, but as digital transformation continues to sweep through the industry, there’s a growing need for digital devices that can stand up to the rigours of site use as well. Unfortunately, the vast majority of consumer grade laptops and tablets aren’t built to operate in these kinds of physically challenging environments, meaning even the slightest knock, drop or bit of rain can quickly lead to device failure.

For this reason, an increasing number of construction firms are turning to rugged technology. Rugged devices are specifically designed to deliver optimal performance in environments where things like knocks, drops, vibrations, high/low temperatures, moisture and dust are all par for the course. As such, they are built to a much tougher standard than their consumer counterparts, which is reflected in the materials they’re constructed from, the testing/certification processes they must go through, and the warranties that accompany them.

Built to survive
When it comes to rugged product design, the starting point is durability and reliability (as opposed to shape/form factor in the consumer market). Resistance to impact, force and pressure are all key considerations, but these must also be balanced against overall device weight and usability. For this reason, magnesium alloy has traditionally been the primary material used in rugged chassis construction, due to its excellent strength-to-weight ratio. However, in recent years, advances in plastic technology has seen the use of composite plastics grow considerably, helping to further reduce overall device weight while still retaining the same level of strength and durability.

Elsewhere, the placement of internal mounting points is paramount in rugged design. Components are mounted securely and independently from one another to prevent a single point of failure causing total device failure. Rubber bumpers on all corners and potential points of weaknesses add further protection in the event of the device being dropped or receiving a sharp knock, to give users added peace of mind when out on site.

Certified rugged: What to look for in a rugged device
In order for a device to be considered fully rugged, it also needs to go through a number of certification processes. The two main industry standards are ingress protection (IP) rating and MIL-STD-810 certification. Other specialist certifications, such as ATEX, are also available for devices intended to be used in hazardous, potentially explosive environments:

IP rating
A device’s IP rating is used to determine how resistant it is to the ingress of water, dust and foreign bodies. Ratings consist of two numbers, with the first digit pertaining to intrusion protection (e.g. dust) and the second digit to liquid resistance. IP65 is the industry standard for fully rugged devices, meaning a dust resistance of 6 (dust tight – full protection against dust and other particulates) and a water resistance of 5 (protection against low-pressure jets of directed water from any angle). However, some rugged manufacturers offer even higher levels of protection in their devices. For instance, the Getac B360 fully rugged laptop is IP66 rated, and the Getac ZX70 fully rugged tablet is IP67 rated.

MIL-STD-810 certification
Another benchmark of rugged devices is MIL-STD-810 certification, which consists of a series of tests designed to evaluate a product’s readiness for use in a range of challenging conditions. Originally designed by the US military, MIL-STD testing has since been adopted by non-military industries because of how thoroughly it tests devices. Although it is an American standard, issued by American labs, it is widely seen as the global benchmark for rugged devices. As such, all Getac rugged devices are tested and certified to this standard.

The most widely used and popular standard, MIL-STD-810, tests performance in an array of conditions and situations, including high/low pressure, high/low temperatures, rain, humidity, vibration, acoustic shock, impacts and altitude, to name just a few. MIL-STD-810 also includes a drop test that assesses the resistance to shock across all of a devices surfaces, including faces, edges and corners. In total, 26 drops from about four feet are necessary to perform the complete test, with the device inspected after each one.

ATEX certification
ATEX is a specialist certification for devices intended to be used in hazardous environments containing flammable gases, vapours or combustible dust/fibres, where a single spark has the potential to cause an explosion. Under the ATEX system, zones containing gases/vapours are assigned a rating between 0 (in which an explosive mixture is continuously present or present for long periods) and 2 (in which an explosive mixture is not likely to occur in normal operation and if it occurs, will exist only for a short time). Similarly, zones containing combustible dust or fibres are rated between 20 and 22, based on the same criteria.

Each ATEX level contains corresponding guidelines on the safety measures that electronic equipment must incorporate in order to achieve certification for use in that zone. As expected, a device that’s certified for zone 0/20 requires much more stringent safety features than those required for use in zone 2/22.

While manufacturers are allowed to self-certify devices for zone 2/22, any device intended for use in zone 0/20 or 1/21 must be certified by an independent laboratory. As such, it’s important that potential buyers ensure independent testing has taken place before making a final purchasing decision.

Rugged or consumer: What’s right for you?
When choosing whether to opt for a purpose-built rugged device or go with a consumer grade equivalent without rugged features, organisations really need to consider the environment they plan to use it in. If it’s going to spend all its time in an office, then a consumer device will probably do just fine. However, if it’s going to be regularly taken outside, onto the building site, or exposed to the elements, then a rugged device will significantly reduce the chances of device failure, delivering a lower total cost of ownership and higher operational efficiencies.