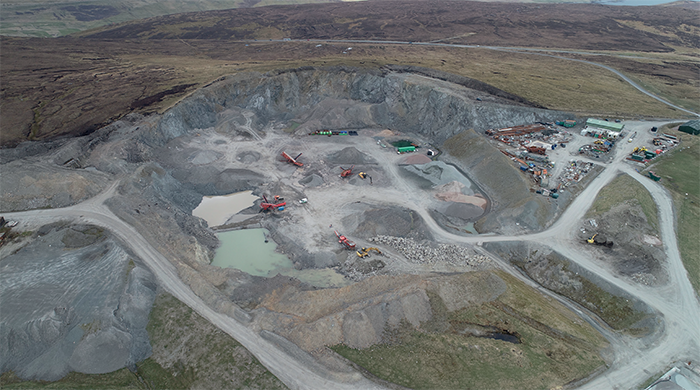 Fifty years in business is usually a huge deal for any company no matter what industry you’re in. But for the team at Tulloch Developments the champagne and celebrations are being balanced against an ever-growing workload as they approach their golden trading anniversary in 2023.

Why? Because the Shetland-based civil engineering and construction firm is on a roll in delivering large-scale projects that are making a real difference on the Scottish island.

The family-run business is currently working on a £9 million contract that will ultimately see Shetland hooked up to the national grid with a supply of renewable energy from windfarms. Tulloch Developments has been working with national energy supplier, SSE, to play its part in constructing the necessary infrastructure required for the connection.

And with other important commitments as Shetland’s most-respected large construction company, as well as being the biggest and most versatile civil and marine engineering contractor on the island, the 50th anniversary celebrations are taking a backseat to the demand in the island’s construction sector.

“The anniversary has quite rightly taken a back seat at the moment simply because Shetland has a micro economy that is extremely buoyant right now with the work that is going around,” says Joe Smith, Director of Tulloch Developments.

“That’s not just the case for us. All the local companies involved in our sector, and probably every other sector, are doing well. When it comes to construction and engineering in particular, there is no shortage of work for any of the local firms – so everybody is focused on maximising their input to that.

“For the next five years or so that doesn’t look like it will slow down. I think that the connection to the national grid opens up the door for other renewable projects. That will almost certainly provide continued work for a lot of local companies, along with more.”

Tulloch Developments has come a long way from the days when founder Peter Tulloch set up the business to focus on building houses. His two sons, Frank and Alistair, who later took over the company in the 80s, helped steer the business in a new direction towards civil engineering projects.

In 2004, George Smith came on board. From that point on, Tulloch Developments focused heavily on civil and marine engineering and the company continued to go from strength to strength.

It’s become a real family affair since because, after Alistair retired and Frank and George stepped down as directors, the next generation has taken control of the ship. George’s sons, Joe and Peter, along with Frank’s sons, Shaun and Stewart, are all now main Directors of the company.

Joe says: “Frank and George are both still actively involved but the day-to-day management of the company is on the four of us. The business is three generations in now.” 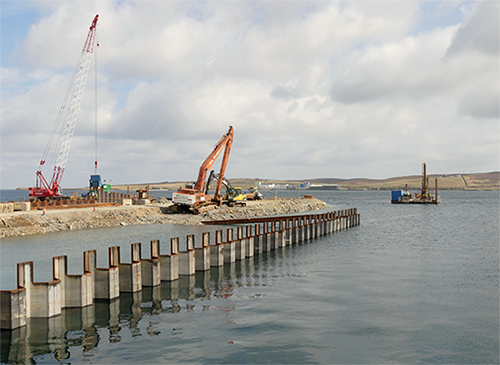 With Tulloch Developments expanding over the last few decades, and the firm building a solid reputation, a natural by-product of that has been a steady stream of large-scale projects and lucrative contracts on Shetland.

In 2016, Tulloch won the contract for the new Holmsgarth North Pier Development. This £16 million marine project for the Lerwick Port Authority required the construction of a sheet-piled pier and concrete deck, which meant that a lot of heavy marine and civil engineering was involved.

Two years later, Tulloch Developments was hooked onto making the new Lerwick Fish Market a reality. The team was awarded an £8 million contract, which involved a large building element, as well as constructing new offices for the agents.

“Marine and civil engineering is our main work scope,” insists Joe. “In 2020, we completed the new fish market in our local town. Being solely based on the island, we can take our company into the direction that suits what Shetland needs. That sets us apart from quite specialised companies that might tender specific jobs from the mainland.

“Our work scope really is quite dynamic and tailored to what is available in Shetland at the time. We solely operate on Shetland as our primary focus and that is what makes us unique.

“We have a core staff of around 50 year-to-year, it sits between 49 and 51 some years, and with minimal staff turnover. The guys that are with us have been with us for a long time. Which shows they appreciate the way the company operates and the diverse jobs that we undertake.”

While civil engineering and construction for the port, marine and fisheries is the bread and butter for Tulloch Developments, the company is also seeing an upturn in demand elsewhere for its specialist expertise. In particular, there has been an increase in work for wind power installations, utilities, and power distribution.

In the major contract currently being undertaken supporting SSE in connecting Shetland to the grid with renewable energy, Tulloch Developments has been tasked with 9km of civils works for the new HVDC link cable. The team have been installing ducting from the shoreline to the new converter station, which involved laying cable ducts along 2km of local roads and the rest through grazing land – after overcoming some environmental constraints.

Tulloch’s part of the contract is nearly finished and then it’s up to SSE to move forward with rest of the works and connect to the grid by the end of 2024. Is the implementation of renewable energy sources a direction the company is looking to for the future?

Joe says: “The scale of the project undertaken in Shetland is nothing like we have seen before. Probably any renewables we can look at is a good idea, and the fact we can play a part in delivering some of it is all the better.”
www.tullochdev.co.uk