Antea Group Belgium has been regularly commissioned to conduct technical and feasibility studies for a range of projects all over the world, as its profound proficiency in multiple sectors guarantees the highest quality of its work
Engineering experts

Antea Group Belgium has been regularly commissioned to conduct technical and feasibility studies for a range of projects all over the world, as its profound proficiency in multiple sectors guarantees the highest quality of its work

Drawing upon 44 years of experience, Antea Group Belgium plays a valuable role in major infrastructure projects across the country and abroad. Part of Antea Group, an international engineering 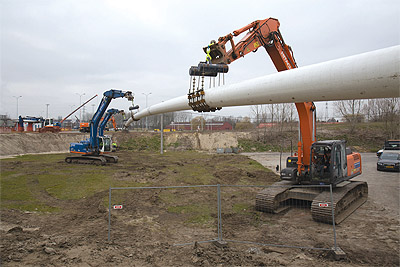 and environmental consulting firm, it employs nearly 240 people who work in four main fields, where the company specialises – environment, infrastructure and civil engineering, water, and urban planning and mobility. “Here in Belgium, it is the infrastructure and civil engineering sector that is the largest one for us, and it forms one-third of our turnover,” Antea Group Belgium’s CEO, Jan Parys says.

Over the years, the company has developed vast knowledge and expertise within its areas of operation, which has enabled it to secure multiple assignments. One of these is the Stora Enso project; Jan tells us more about: “It aimed to connect the paper factory of Stora Enso with Volvo Car Gent, the two of them sitting on the opposite sides of the Ghent- Terneuzen sea canal, in a bid to reduce their carbon footprint.” Antea Group Belgium was commissioned to engineer the heat exchange between the two factories, which resulted in the construction of a pipeline with a total length of four kilometres. The engineering took place between November 2014 and July 2015, and the construction finished in August 2016. Later that year, on 18 November, the new heating network was officially opened.

Impressive project
Jan discusses the nature of the project: “Stora Enso operates two biomass-fuelled combined heat and power systems that produce more than 70 per cent of the electricity it requires. The project’s objective was to transport the heat from the Stora Enso factory to the Volvo Car Gent facility on the other side. We succeeded in connecting the two sites via an underground pipe, which now transports water heated to 125 degrees Celsius and under pressure, to heat the Volvo buildings and especially its paint factory, which needs to reach a certain temperature, so that parts of the car can be painted. After the hot water reaches the car factory, it is cooled to 85 degrees Celsius, and then returned to Stora Enso.”

Due to the presence of underground pipelines and cables, Antea Group Belgium had to perform a number of feasibility studies that would allow its pipeline to go seven metres below the channel bottom. “It was one of the most challenging aspects of the project. We had to have an open trench on the Stora Enso side, and then we made three horizontal directional drillings of which two with steel-in-steel pipes, followed by the process of bringing them out and connecting them to the Volvo factory,” Jan explains some of the technicalities.

Pipeline highway
Parallel with the successful implementation of the Stora Enso undertaking, Antea GroupBelgium has also been working on another substantial project. The company was approached by the Port of Antwerp and the Flemish Government to conduct a technical feasibility study for the reservation of a new international pipeline corridor connecting Antwerp in Belgium, Limburg in the Netherlands, and the Ruhr area in Germany. “The Port of Antwerp is home to Europe’s largest integrated petrochemical cluster and pipelines are vital in managing supplies to this cluster,” Jan points out.

He lists the objectives of the research: “First of all, we want to proactively allocate a ‘pipeline highway’, a corridor that is reserved specifically for transporting not only gas, but also petrochemical 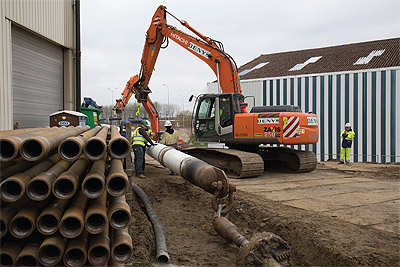 fluids and future industrial resources, water, or even high-voltage cables. Furthermore, one such corridor will connect the large petrochemical clusters in Flanders, which is necessary to secure the supply to the surrounding countries.

“The project is about promoting long-term economic development and safeguarding the competitiveness of Flanders, too. Having a designated area for the corridor will facilitate the construction of new underground pipelines, which will benefit those companies that are willing to invest in pipelines. It will also make the process of obtaining construction permits hassle-free, especially if a company wants to connect a long, cross-country pipeline,” Jan reasons. “Another objective of the study is to capitalise on the advantages of one main pipeline versus various individual guide strips. This means that everything will be concentrated in one area, therefore the subsequent management of the corridor will be easier.”

Harnessing specialities
Antea Group Belgium has divided its study into three phases, and Jan offers his brief comment on each of these. “During the first stage, which covered the technical study, we worked to choose the best area where the corridor could be built. Then, the second phase represents the economic feasibility study, which is in progress at the moment. Again, we are collaborating with all the stakeholders. And in the third phase, we are researching the possibilities of land use for a corridor of such a scale. We are holding talks with architects, various stakeholders, and the local communities across Belgium to come up with a viable solution,” he assures us.

Well-versed in several disciplines, Antea Group Belgium has been trusted to provide engineering services for lots of other projects, beside the two presented to us in great detail by Jan. He sketches some of the all important ventures the company has participated in lately. “I can pinpoint the work we regularly do for Belgium’s electricity transmission system operator, Elia. It is a big client of ours, and we harness one of our specialties, namely bringing high-voltage cables underground, to support Elia in its quest for shifting to more sustainable energy sources, such as solar and wind. Belgium is a very densely-populated country, and most companies are obliged to place their high-voltage cables underground, which enables us to apply our knowledge and prepare feasibility and technical studies for connecting electricity plants all over the country.”

The knowledge capital the company has accumulated throughout its years of operation can be seen as the foundations upon which it has built its international presence. Antea Group Belgium is continuously working on projects in developing countries in Asia and Africa. “We export our knowledge worldwide. For example, we are nearly finishing a project in Papua New Guinea, where we were assigned to identify climate risks, caused by climate change and variability, and sea-level rise, including tsunamis, cyclones, river and coastal flooding, landslides, and droughts,” Jan reveals, also noting that for this activity the company is partnering with the United Nations Development Programme (UNDP), which has discovered that a lot of developing countries are in need of this type of knowledge coming mainly from Europe and America.