Back to Profile Gallery > Balco AB

Since the company was founded in 1987, Balco AB has pursued its passion for delivering industry-leading balconies and today provides as many as 5000 units each year
Balconies

Since the company was founded in 1987, Balco AB has pursued its passion for delivering industry-leading balconies and today provides as many as 5000 units each year

Balco began operation in Sweden, where it is currently headquartered inthe city of Växjö. The company works to deliver turnkey solutions within a niche market and today delivers balconies through out its native Sweden, Norway, Denmark, Germany, Poland, the Netherlands and United Kingdom. The growth of Balco has been impressive, with the turnover of the company doubling every third year during the first 15 years of its operation and accelerating to an average increase of ten per cent over the following ten years. Today, despite challenging market conditions the company’s performance remains strong allowing it to claim an annual turnover of £60 million. 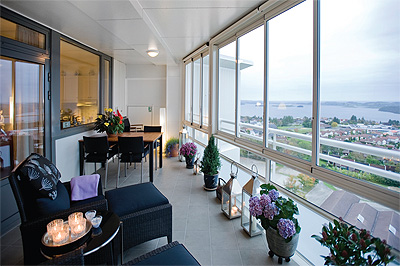 As Balco has grown, it has evolved to meet the varied demands of its clients. This ability to anticipate the needs of its customer base and respond to potential market opportunities has proven invaluable in allowing the company to expand, as chief operating officer Anders Ingemarsson explains: “When Balco was founded, open balconies were originally the target market. However, the Scandinavian climate with its short summers led to increased focus on glazed balconies as a way to prolong the warm season. In addition to the insulating effect that they provide, a glazed balcony also has noise reducing properties and of course has an energy saving effect on the building.”

Eventually, the company’s push to incorporate new services sparked the logical move to pay closer attention to the exterior of the client’s structure itself as Anders further details: “Over time we have also moved towards looking at the total façade of the building so that we are able to give customers a total lift of the structure’s exterior.”

Today, Balco continues to provide industry-leading balconies as well as the renovation and refurbishment of façades. It provides option in glazed, open and access balconies that are serviced and installed with a host of innovative patents that the company has created through dedicated research and development activities. These include Balco Flexible, its range of tolerant fixings that allows compensation for deviations in the host building; Balco Cleanline, which is designed to allow the collection and flow of water in the window track and down through the aluminum frame, keeping the façade clean; and the Balco Vision, which provides a folding glass system without a frame, combined with glass corners. This provides the impression of a single expanse of glass and an excellent view.

For clients looking for the pleasure of an open balcony and the benefits of a glazed solution during the cooler seasons, Balco has developed Balco Twin and Reversible technologies. Balco Twin allows customers to open up the whole balcony or to fold in an individual pane at any point along the track, with very little effort. The Balco Reversible also allows for both glazed and open environments with a sliding pane with double-energy glass that can be turned 180 degrees.

Balco also delivers products that that allow for a degree of environmental control as well as energy saving elements. Its Balco Vettech technology enhances the balconies built-in ventilation to reduce condensation and uncomfortable heat gain in addition to protecting the building’s existing ventilation system. A recent development that is patent pending is the company’s Balco Climate technology. Balco Climate is a glazing solution with two separate sheets of glass in the parapet – clear glass on the outside and heat absorbing glass on the inside. Solar-powered fans sit between the glass at the bottom. The column of air between the glass is heated by the sun and when the fans start, the warm air is forced up inside the parapet. This offers an excellent warming solution to combat cold snaps during the winter months. 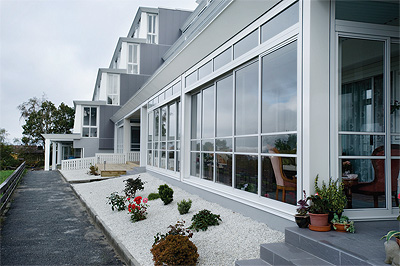 These innovative solutions have made Balco a market- and made it popular with customers including its largest segment in co-operative, tenant-owners’ building societies. Within this sector the company is largely involved in the replacement or refurbishment of existing balconies and the installation of new balconies on apartments that previously did not have them. It also works with construction companies in the construction of new builds and refurbishments.

During a project in northern Norway, Balco was able to successfully address problems with the façade of two 12-storey apartment buildings. Among other problems, the bricklayer of the façade was in very bad condition and tenants were unhappy with the condition of their current balconies. Balco was able to fully refurbish the façade as well as to install new and larger balconies. Commenting on this and other projects Anders says: “Balco is very strong when it comes to engineering. As all buildings are different and unique, the design solution has to be customised for each project and more-or-less for each individual balcony. As a project could span for as many as 20 to almost 1000 balconies the company needs to be able to handle both smaller and larger projects effectivly. That is one of the real strengths of Balco.”

Balco can rely on vast deposits of experience and innovation as it moves into 2014. All of its products are designed and manufactured in-house and it relies on trusted subcontractors to install its unique designs. With these strengths the company is confident of future growth during the coming years as Anders concludes: “During 2014 we aim to increase our footprint in the UK as it appears to be the company’s next big market. We will also establish Balco in its newest market in the Netherlands while sustaining business in Sweden, Norway and Germany. We will look to further potential markets to help the company reach a target turnover of £100 million within five years.”