Back to Profile Gallery > Ballast Nedam

Working in partnership with Vestas, Ballast Nedam has delivered an innovative, reliable and durable end product of the highest quality in the Egmond aan Zee offshore wind farm project
Winds of change

Working in partnership with Vestas, Ballast Nedam has delivered an innovative, reliable and durable end product of the highest quality in the Egmond aan Zee offshore wind farm project

In 2001 the Dutch government published the concession tender for the first offshore demonstration wind farm in the Netherlands. The site for the offshore wind farm had already been designated, approximately 15 kilometres off the coast of Egmond aan Zee. The entire project formed part of the efforts of the Dutch government to develop innovative and improved ways of generating renewable energy.

Shell and Nuon teamed up in NoordzeeWind, a partnership specifically formed to bid for the concession and the subsequent development of the offshore wind farm. During 2001 NoordzeeWind put out a tender to find an EPC consortium for the design and construction of the wind farm. The consortium of Neg Micon (merged with Vestas afterwards) and Ballast Nedam, called Bouwcombinatie Egmond, was chosen. This consortium supported the concession bid of NoordzeeWind, which was submitted to the Dutch government at the beginning of 2002. 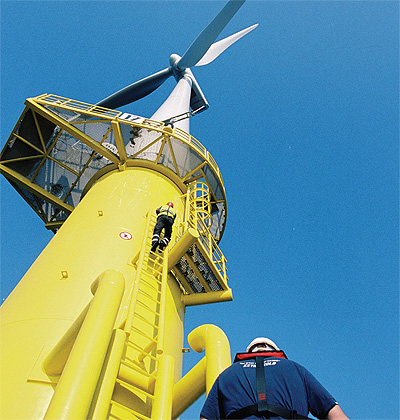 Later in 2002, NoordzeeWind was granted the concession for the Offshore Windpark Egmond aan Zee (OWEZ). Bouwcombinatie Egmond then started the preparations for the project, including support during the permitting process, placing of a metmast, preliminary and final soil investigations. In early May 2006, the first wind turbine components arrived, and in August of that year the first electricity was produced. The wind farm is now fully operational.

Ballast Nedam, a leading-edge civil and marine engineering contractor, has a long and successful track record in the construction of bridges and marine installations. Amongst others, the company has developed methods for the onshore production and offshore placement of large prefabricated elements in bridgebuilding projects. This takes place with the help of specialised heavy-lift vessels, sometimes even tailor-made or customised.

Dolf Elsevier van Griethuysen, Ballast Nedam’s project director for Bouwcombinatie Egmond explains: “The OWEZ project consists of 36 turbines, each 115 metres tall and towering 70 metres above sea level. The turbines create approximately 100 megawatts, which is enough to power around 100,000 households and 300,000 residents. Basically, the wind farm is a state-of-the-art electricity power plant, which has reduced the amount of carbon dioxide emissions being produced by the Netherlands.”

Ballast Nedam’s know-how was used with resounding success in the design and construction of the OWEZ project. The business’ heavy lift vessel, the Svanen, was modified for fixing the foundation piles and installing the transition pieces. This involved a specialist design effort, which installed a unique crane with a hoist fitted in a pulley for the horizontal movement of foundation piles. For the very first time, piles well over four metres wide and weighing up to 270 tonnes were driven from a floating vessel.

With this project Ballast Nedam takes a new step in its ambition to be one of the key players in the European offshore wind energy market. In the 1990s Ballast Nedam built two offshore wind farms in the Dutch IJsselmeer, using offshore techniques. These projects stimulated further investments in research and development, in which the company co-operated intensively with partners such as Vestas.

Through these projects Ballast Nedam has gained a unique position and a head-start in the offshore wind energy market in combining high level structural and dynamical design knowledge with the technical capacity, equipment and skills for designing and completing offshore wind energy projects.

Designing and building the Offshore Windpark Egmond aan Zee has been a unique experience for the company. Ballast Nedam and Vestas combined their talents and skills and put their ingenuity and resilience to the test to generate a top-notch end product.

The wind farm boasts a series of truly unique characteristics. It is the first ever turnkey project built by an integrated joint venture and the first Dutch wind farm to be erected offshore. The Vestas V90 3 MW turbine deployed at the wind farm is far more sophisticated than earlier models. In addition, the wind farm has been built in the North Sea on a varying seabed at an unprecedented depth. Furthermore, the two companies have designed and built a unique meteorological measurement mast.

At all stages of the project, numerous complicated calculations and computations had to be made. For example, Bouwcombinatie Egmond had to determine the dynamic loads affecting the structures, assess fatigue effects and work out rates and dimensions. Revolutionary new construction and monitoring techniques were also designed and applied successfully. Moreover, economies of scale were realised – not only in terms of environmental effects and raw materials but also in terms of project duration. As a result of the consortium’s hard work the wind farm is one of the fastest-built offshore wind parks ever. 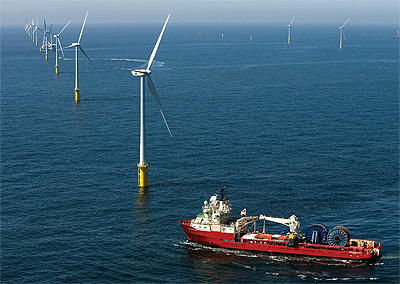 Having successfully undertaken the OWEZ project, Ballast Nedam has now been entrusted to develop a new wind power project. The Scheveningen Buiten wind farm is expected to generate over 300 megawatts when finished. Ballast Nedam is working with Evelop, a European project developer, to develop the site, which will be built outside the 12-mile zone, off Scheveningen. The wind farm is intended to generate enough energy to supply approximately 350,000 households with electricity. The Scheveningen Buiten project is to make a significant contribution to achieving the targets the Dutch have set for renewable energy.

Offshore energy services are a recent addition to Ballast Nedam’s comprehensive range of services and products, but its focus in this field extends far beyond installation work and encompasses everything from geotechnical analyses to structural engineering – from the sea-bed up.

Innovative technologies, design and development lie at the heart of Ballast Nedam’s project solutions. They literally and figuratively provide a reliable and solid basis for tomorrow’s renewable energy sources. As a result, the company ranks among the top five construction firms in the Netherlands. The organisation’s strength lies in the field of appealing and cost-effective construction projects, which it can support with the high degree of knowledge and expertise that is available within the company.

Dolf explains: “Ballast Nedam has two main business areas – building construction, which includes housing, offices and shopping centres; and infrastructure, which undertakes roads, bridges, tunnels and wind parks. One of our main strengths is that we have had a long tradition in building famous bridges around the world.”

One of the major projects the company has carried out in this field is the Storebaelt Bridge. The task here was to design and build a 6600 metre long concrete bridge structure over the Great Belt as part of the permanent link between the Danish mainland and the island of Sjaelland.

The design of the Storebaelt Bridge is based on ‘offshore assembly’, a building concept for large bridges which Ballast Nedam has gained extensive experience in with projects including the Zeeland Bridge and the Bahrain Causeway. This concept means that the design and manufacture of the various parts of the bridge were completed onshore and then transported offshore for construction.

The vertical and horizontal transportation of the parts on the water was entrusted to the Svanen, a crane ship specially designed for the West Bridge project. Svanen at that time measured 94 by 65 metres and had a lifting capacity of 6900 tonnes. The Svanen can load extremely heavy girders, caissons and pier shafts, sail them to their final location and lift them into position with extreme accuracy, and all of this under difficult, open sea conditions. As a result of its sophisticated construction, the Svanen exhibits less roll (deflection) than contemporary crane ships.

Since the Storebaelt Bridge project, the vessel has been involved with a number of contracts. Dolf explains: “The Svanen was developed in the 1990s and since then it has been used for a significant amount of challenging projects. The ship has been involved with the Confederation Bridge in Canada and the Øresund Bridge, between Copenhagen and Malmö.”

He continues: “The Confederation Bridge is the longest bridge in the world over ice-covered water. The Svanen was deployed to be able to transport and position the heavy prefab elements, some as heavy as 7900 tonnes. This unique floating crane had to be modified for the large concrete elements that were used in this project. The Svanen was developed more than 100 metres tall, with a lifting capacity of over 8700 tonnes. The vessel can hoist extremely heavy elements to a few millimetres accuracy, under sea conditions.”

As a result of the successful completion of the OWEZ project and the construction of a number of extremely important bridges, the Svanen has developed an outstanding reputation in the market. Dolf elaborates: “The vessel is continuously being improved so it can be used on many different projects and challenges. We are very happy with the progress of the Svanen and now an increasing amount of customers are starting to see the benefits of using the ship. We have a number of clients who now want to rent this vessel, therefore the Svanen may be involved in some very important projects over the next few years.”

Across all of its projects and services, Ballast Nedam does its utmost to offer its customers commitment, quality, expertise, reliability and flexibility. The company also offers its employees a challenging work environment, whilst contributing to the quality of the environment in which they work.

Looking to the future, Dolf explains: “The offshore wind market is a niche area for us. We are a construction firm active in the infrastructure and building areas – this is our core business, which continues to be a very promising area for us. We have a small research and development team, which continually explores the market and enables us to develop solutions that meet clients’ challenging needs. The Svanen vessel is a perfect example of this.”

He adds: “Ballast Nedam is an extremely innovative company, which is constantly looking for new niche markets to venture into. We are currently looking to become active in the concentrated solar power (CSP) market and we also have a division, which has developed temporary parking garages to rent out.”

Dolf concludes: “Being at the forefront of the market is very important to us. In the construction market, when you have invented something new it is visible for
everyone to see. Therefore, it is very easy for our competitors to copy any new developments. Our main aim is to remain innovative because we want our next step to provide better solutions than any other company on the market.”