For 121 years, the Baufritz name has been synonymous with producing the most innovative eco-homes available on the market. Its infectious positivity for future growth opportunities hints at many years of success to come
Facing up to the future

For 121 years, the Baufritz name has been synonymous with producing the most innovative eco-homes available on the market. Its infectious positivity for future growth opportunities hints at many years of success to come

Since the UK made the historic decision to vote to leave the European Union in June 2016, the repercussions on businesses from all manner of different industries and sectors have been well documented. While the majority of the worse-case scenarios depicted in the run-up to the referendum have since been proven to be unfounded, there is no denying that Brexit, and its long-term impact, has created considerable market trepidation and a dip in investor confidence.

“The current state of the UK market, which is defined by a large degree of uncertainty, is one that affects the entire construction industry,” explains Oliver Rehm, UK Managing Director of Baufritz. This was all the more relevant when we spoke to Oliver, with the UK in the midst of a snap General Election campaign at the time. However, it is these very conditions that allows one to truly appreciate just how Baufritz has continued to prosper during these challenging times.

With a history dating back to 1896, when master carpenter Sylvester Fritz first opened the doors to his carpenter’s workshop, Baufritz has spent the following 121 years honing its expert craftsmanship, creativity and spirit into becoming one of the most innovative eco-home building companies in Europe, renowned for its prefabricated timber homes. Today the company operates under its fourth generation of family management, producing more than 200 homes a year and providing employment for over 350 employees. 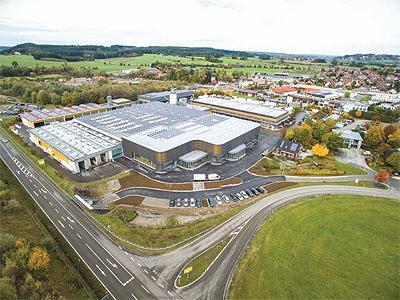 “We are fortunate in that we have been dealing with many of our customers for many years,” Oliver continues. “A healthy number of these customers have more of a long-term view of their own business and perhaps are not as distracted by the current political situation. This has been an important factor behind our own resilience.”

Equally as vital has been the company’s ability to identify new markets for growth and expansion to compensate for any slowdowns that may occur in more established regions. “We believe there is a good market for Baufritz in Ireland, which we feel has the ability to benefit from the Brexit process as companies consider establishing their operations there in order to retain close links to the European Union,” Oliver reveals. “In December 2016, we signed a large building contract for a 25-home project in Dublin. The groundwork for this project will begin in the second half of 2017, with an anticipated construction period of two years. This is a project that we have very high hopes for and is one that really works well financially for both ourselves and our customer. We believe that the combination of our speed of construction and the quality of our product means that these homes will be relatively easy to sell and will act as an advertisement to developers that could go on to become customers of Baufritz in the future.”

Baufritz is targeting markets where it can transfer its years of experience of working within the UK and apply its proven business model. This has opened up discussions with developers in the Channel Islands and has led to the signing of a large contract for a project in Jersey. On mainland Europe, the company’s activities continue to grow at a steady pace in Switzerland, Belgium and Luxembourg, while in its domestic German market there has been notable movement towards multistorey and apartment buildings in recent years.

As a result of its need to facilitate the changing requirements of its customer base, Baufritz commenced with the extension and modernisation of its factory in Erkheim in the Autumn of 2016, a task that was completed in January 2017. “Due to the large number of orders on our books it became a necessity to reconfigure our factory, not only to meet this demand, but also to reduce lead times for our customers,” Oliver states. “The need to increase floor space and invest in new machinery actually resulted in the factory being closed for almost six weeks, so this was clearly a time sensitive undertaking. While it was a huge challenge, its success has resulted in increased capacity of approximately 30 per cent, which is a massive future investment for the company.”

Another exciting recent development for Baufritz is the opening of its latest show house. “This new show house is radically different from any that we have unveiled before,” Oliver enthuses. “We worked closely with a product designer to create a vision of what we think a future home will need to be like, specifically one that deals with the concept of generational living. We are very pleased with the coverage the new show house has received internationally, which will help us as we look to spread our vision of future, ecological buildings across Europe.”

Oliver is aware that while mainstream coverage of the need for new homes will continue, particular as populations increase or age, the reality of the issues of securing land and gaining funding from banks will continue to create challenging conditions. Nevertheless, with a full order book taking it through the next few years and a positive approach towards the future, he is convinced of the company’s ability to adapt, and indeed prosper.

“Baufritz is a business set up to achieve growth,” Oliver says. “We are always on the lookout for new opportunities and every year we set ourselves higher quality and service targets, which we are determined to not only meet, but to exceed. We have been building houses now for more than 120 years, which in itself is a clear sign of consistency. We will always invest in our own future, much in the same way that we will always produce homes that we consider to be future proof. I personally believe that even in times of uncertainty people will look towards those individuals and businesses that represent stability and retain a positive outlook towards what is coming next around the corner, and that is what Baufritz is all about.”