Baufritz has optimised its construction processes, largely thanks to the extension of its facility, completed early in 2017
The warmth of home

Baufritz has optimised its construction processes, largely thanks to the extension of its facility, completed early in 2017. The building company has been commissioned to deliver a number of projects in Britain and expects to remain strong in the region, despite impending Brexit 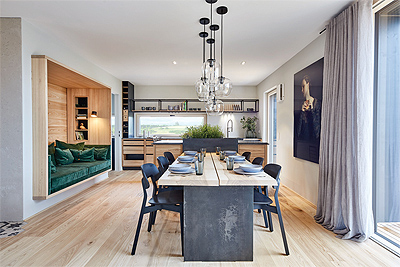 Hailing from Germany, prefabricated construction specialist Baufritz has operated in the British market for over 30 years now. We spoke with the company’s UK Managing Director, Oliver Rehm, to learn more about the latest developments at the business. “Surprisingly, people in the UK are still very interested in building a new home now, despite the uncertainty of Brexit, and they continue to trust the product that we can offer,” he begins. “It appears that they want to have their new home built before the actual Brexit happens, because nobody can tell how the divorce between Britain and Europe will work, with regards to changes in building standards, necessary approvals, or the introduction of taxes or duties. Still, it is very interesting that the market remains buoyant. According to my observations, I would even say that the house itself in the UK is generally getting larger, which probably has to do with land affordability.

At the same time, we have recently received enquiries for much smaller buildings, too. Typically, our customers are in their mid- 50s and at that time of their lives, they still want to live in larger houses, where they can take care of their grandchildren and host family gatherings. When they enter their 70s, however, they feelthey need to downsize, because they can no longer maintain a big house. Notwithstanding, they still want to live in a house, instead of going to care homes, so we have designed numerous smaller buildings for our elderly clients,” Oliver reasons.

Market trends
He goes on to compare the requirements Baufritz has seenfrom the British market, with the demands it has to address in its domestic market in Germany.“Lately, there have been more enquiries for the building of flats in Germany. Again, there is a tendency showing that people want to downsize. Where this differs from the trend in the UK, is that they no longer want to live in houses, but prefer moving to a flat. They want to live in sociable places with a community around, where they can be in connection with neighbours and friends,” Oliver highlights. “In the detached house sector, which is a traditionally strong area for us, there is more interest in larger buildings that create multigenerational living, i.e., children, parents, and grandparents living together, so that they can look after each other and spend more time together.”

Baufritz extended its production facility at the beginning of 2017 to increase its capacity and meet the boosted market demand. “We introduced a new production line and changed all of our old machines to more efficient equipment of the latest technology. Everything is up andrunning now and working very well, so I am confident that we are well-prepared to receive new orders,” Oliver states proudly. “We had to expand, because we realised that we need to invest more in machinery, chiefly because of the shortage of craftsmen that will occur in the future. The entire process is getting more digital, so we have to invest in technology to keep in pace.

“We restructured the layout of some of the practices and machines during the expansion,”Oliver continues. “For example, wemade tweaks at how things arrivein the factory and in what orderdifferent tasks are performed, which has now opened sufficient space for certain elements that have grown in significance in our job. The level of prefabrication has changed, too. We aim to prefabricate as much as possible to reduce the amount of work we have to do onsite. We have identified ways in which we can manufacture certain components more effectively. For instance, we have established a dedicated area for heating, plumbing, and electric installations, much larger than the one we had before. Similarly, we now have more space to pre-finish larger elements more accurately.”

Green targets
Oliver draws our attention to Baufritz’ sustainable practices,which are considered at all levelsof the company’s factory. “It hasalways been on our mind that wehave to work towards reducing our 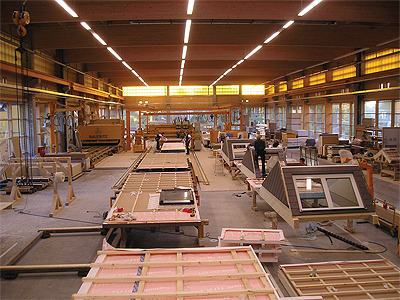 carbon emissions and theamount of waste we produce.Last year, we reached the statusof a carbon-neutral manufacturer, meaning that all of the energythat we require for our productionand administration, comes solelyfrom renewable sources. We haveour own photovoltaic installation,which produces up to two-thirdsof the energy we need, andwe also use wind power. It is a fantastic achievement for us, butas our tradition goes, we have already set ourselves another task for this year, which is to become zero-waste, too. It is true that at the factory, we recycle everything straight away. However, when wehave to deliver roof windows orpieces of machinery, these alwayscome heavily packaged. There is alot of plastic and we are working closely with our suppliers to finda way to eliminate the need for this type of packaging, or at leastmake sure that the plastic can be returned, recycled, and reused,” Oliver maintains.

Brand growth
Taking a look at the future, he predicts there will be more contracts in the commercial buildings sector for Baufritz in the next several years. “To accommodate this need, we are preparing our construction system, because there are differences in building regulations and standards between commercial and domestic sites.In Britain, we really have to carry on doing what we have been doing lately. We feel that the right thing to do, is to continue investing in the country. We cannot waver or show levels of uncertainty, because this means sending a negative signal to customers. Britain remains a thriving market, uses the most advanced technology, has a strong financial service industry, the design and architecture community is in a good shape, and the property market is going forward, so we have to continue being part of that. I do not think that the industry in the UK has an equivalent to what we can offer, so I am sure that the company will continue to grow and strengthen its brand in the years to come,” Oliver concludes in high spirits.