Back to Profile Gallery > Bell Contracting

For over five decades, Bell Contracting has shown itself to be undaunted by the changing nature of the construction industry, a trait that has seen it remain at the heart of the massive success achieved by the KW Bell Group
Embracing change

For over five decades, Bell Contracting has shown itself to be undaunted by the changing nature of the construction industry, a trait that has seen it remain at the heart of the massive success achieved by the KW Bell Group

KW Bell Group, one of the UK’s most successful construction companies of the last 50 years, is no stranger to the pages of Construction & Civil Engineering, having been profiled on several 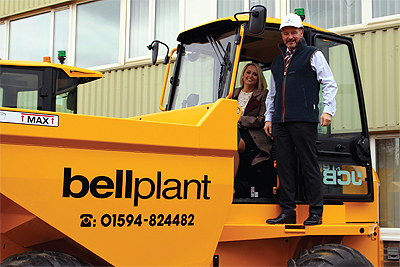 occasions in the past. In each previous instance the focus has been on the collective efforts of its four divisions – Bell Homes, Bell Plant, Bell Partnerships and Bell Contracting – however, when we had the pleasure of speaking with Group Director Peter Bell in May 2019, the spotlight was trained on the latter division, Bell Contracting.

Founded 51 years ago by Peter’s father Keith Bell, the business began life through his work as a solo bricklayer. In the decades that followed, Bell Contracting would diversify its service offering to the point that it would become a leading specialist in groundwork and civil engineering for the house building industry, and one that was this year listed in The Sunday Times Profit Track 2019 league table. “In addition to being the longest-running area of the KW Bell Group, Bell Contracting is also the biggest in terms of size, achieving a turnover of around £50 million per year,” Peter – also Bell Contracting’s Managing Director – explains.

Operating across the South West of England and South Wales, where it works with a large client base which includes five of top ten house builders in the UK, Bell Contracting today boasts a workforce of almost 500 highly skilled operatives. The size of the business means that it is capable of carrying out the best part of 30 contracts at any one time, and at the time of speaking to Peter it was in possession of a full order book of work taking it through to May 2020. Peter expects that by the end of this calendar year that order book will be filled to the point where the company will have a full plate until May 2021.

Total consistency
So, what has been the secret to the company’s success? For Peter, it ties into a rather unique compliment he was paid just over a decade ago. “It was back then that a good friend of mine proclaimed that we were a lot like a tin of Heinz Baked Beans in that we do exactly what it says on the tin,” he cheerfully states. “Now, while it would perhaps be more glamorous to be compared with say a bottle of Dom Pérignon, the message this comment sends it that it has always been about ensuring the consistency of our offering. This relates to the bidding process, the work of our site delivery teams, our customer service and aftercare, and most importantly of all health and safety.”

Of course, one can’t ignore the fact that, these days, price is also a key driver, but alongside that comes the need to build up the right client base, and the ability to constantly reinvent oneself in order to stay fresh and appealing to customers. Peter and the rest of the Bell Contracting family are well aware of this, and with contributing factors such as the regular introduction of new technologies and the skills gap that currently exists within the industry in mind, they are constantly looking for improved ways of delivering the end product.

“Over the last 18 months or so, we have invested the best part of £2 million into a mix of new technologies, methodologies and training, which we are very excited about,” Peter enthuses. “For starters, we have spent over £800,000 on satellite 3D modeling excavator control systems. These systems allow us to receive designs and AutoCAD drawings from our clients’ engineers, which we plug directly into our excavators on site that carry out the groundworks as per an individual project’s specifications. This helps to cut down on labour costs, reduces the need for peg bashing, and creates a better, quicker, safer way of carrying out complex works.” 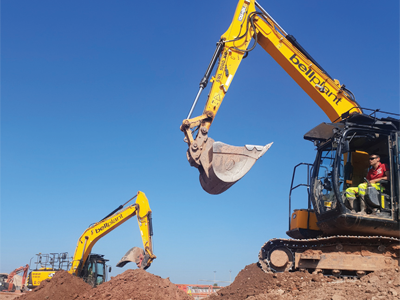 Investing in equipment
The theme of health and safety comes up again when Peter details another important investment. “To date, we have purchased 20 cabbed dumpers, which provide a ROPS/FOPS and SIPS structure to protect the operator,” he says. “These dumpers represent the way we are changing the way we operate these vehicles on sites. We believe that far too many people in our industry use dumpers as something of a wheelbarrow that can be abused. We want to transform this attitude and enhance the levels of professionalism on site by appointing designated operators to these trucks. In doing so, we also want to create a safer environment for managing earth on site, and that is where these new cabbed dumpers come in.

“Equally exciting for us is the recent purchase of two vacuum excavators, at a cost of £320,000. As an industry, we are a big culprit when it comes to cable strikes, which are usually caused by mini-excavators and have the potential to cause series injuries, or even fatalities. Our vacuum excavators, and the way they operate by sucking up granular materials and surface tarmac, will allow us to visit active sites and carry out work on live service pits in a fast, safe manner, making cable strikes a thing of the past.”

Proving that the apple doesn’t fall far from the tree when it comes to making the business future ready, Peter’s daughter Nicola Bird – Bell Contracting’s Safety and Business Development Director – has spent the last two years spearheading a bespoke groundworks apprenticeship scheme like no other. “This apprenticeship, which has been developed in conjunction with a sub-contracted training provider, sees us linked with both The Heart of Worchester College and Vale College. Where the scheme differs from most is in the fact that students do not attend the colleges themselves, instead working from our two training hubs – one at our head office in Cinderford and the other in Cardiff – where they consolidate their theoretical and practical learning.

“Building upon Nicola’s efforts, we will soon be putting in a request for planning permission for a new technology-based construction centre and training academy on land that we have acquired opposite our head office. Working with universities and colleges within a 50-mile radius, we want this centre to be at the heart of our efforts to take a fresh approach to competency, and to ultimately make a telling contribution to addressing the undersupply of groundwork and civil engineering training in the UK.”

Turning back to Bell Contracting itself, Peter’s focus at present is on consolidating the success of the business and ensuring that it continues to deliver the services, customer care and professionalism that its existing clients expect of it. In the meantime, his forward-thinking mindset means that he continues to promote people from within the business with succession planning in mind. “Through a combination of our people, new technologies and methodologies, and an embracing of cultural changes, we believe it to be possible to achieve further increases in turnover and profitability in the coming years, all while taking care of all of our existing clients,” Peter concludes. “After all, for us it is not about the top line, it is about the bottom line!”