Back to Profile Gallery > CEMEX Mortars

Factory produced for consistency and reliability, the high-quality mortars made by CEMEX Mortars are a principle ingredient in major housing and infrastructure projects throughout the UK and Europe
Understanding mortar

Factory produced for consistency and reliability, the high-quality mortars made by CEMEX Mortars are a principle ingredient in major housing and infrastructure projects throughout the UK and Europe

Aglobal powerhouse in the building materials industry – with more than 40,000 employees worldwide and a turnover of some $15 billion – CEMEX is a name known throughout the construction world. In the UK alone, the company generates around £775 million in annual sales, and in addition to being a market leader in readymixed concrete, cement and aggregates, it is also an authority 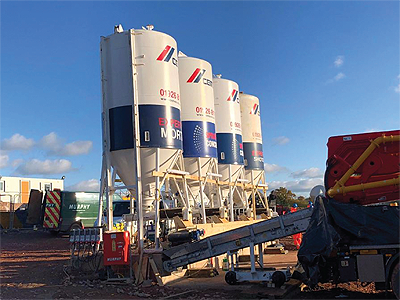 when it comes to the supply of screeds and mortars. In the case of the latter product category, the company has a proven track record of delivering consistently high-quality readymixed, dry silo and coloured mortar – as well as related products and services – that all confirm to British and European standards.

It is CEMEX’s mortars business that has also undergone some of the more significant changes in recent times, as Michael May, Sales Manager Mortars Europe, explains. “CEMEX Mortars has been a stand-alone business for as long as I can remember, but arguably the biggest development in its recent history was the decision taken in October 2018 to separate the dry silo mortars element from the rest of CEMEX Mortars’ offering to create a Europe-wide division.”

So, what was it that spurred this decision? “In the past, CEMEX’s European operations were run as individual country units, and while this structure worked well to a point, it was determined that there were significant advantages to be had by finding a way to seamlessly leverage best practice between countries,” Michael states. “Prior to October 2018, best practice in, say, the UK or in France was not easily transferable to other countries, simply due to the structure of the business. What we have done is take an in-depth look across our European business in order to highlight what we do well, what we can improve upon, the products we sell and the specialist knowledge we possess, and with a shared structure now behind us we can transfer learning much easier between countries, to the benefit of all.”

Sprayed concrete
In the UK, CEMEX Mortars has three plants – two dedicated to mortar products and one to sprayed concrete – while in Spain it has four facilities currently operational, with a fifth due to be brought back online in 2020 to meet specific regional demand. Meanwhile, the company continues to attract large volumes of work in Poland, a market that Michael describes as having been “booming” for the last three years. Such is the country’s importance to the company that initial discussions have taken place about establishing a physical presence there in near future.

“Here in the UK, mortars represent one of, if not the most profitable business units that CEMEX possesses anywhere in Europe,” Michael enthuses. “This is as a result of several factors, not least of all the increase in house building that the country has seen in recent years, which at the same time has resulted in the scaling up of our own production capacity and investment in people and equipment.

“The UK has also been the source of an increase in demand for mortars of colour – particularly white mortar – and the growing demand for decorative mortars has driven a rise in higher value products being brought to market. Last, but not least, we are in the process of bringing into the business a Specialist Products Sales Manager to sell bespoke products for large infrastructure projects, initially in London, but with a view to rolling this out across the rest of the country. So, as you can tell, the UK has performed exceptionally well in terms of volumes in recent times.” 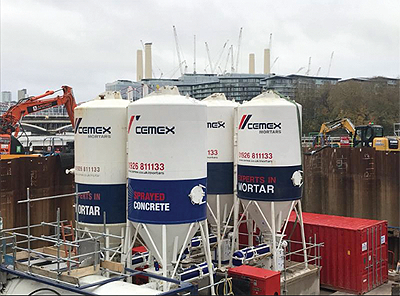 Five years ago, CEMEX would add to its UK operations the above mentioned sprayed concrete plant, located in Doveholes, Derbyshire, and as Michael goes on to reveal, this business has gone from strength-to-strength since. “CEMEX recognised that, with the many tunnels that are being dug, or are planned to be dug, across the country, there would be a massive requirement for sprayed concrete tunnel lining. Traditionally, such a product is made away from a project’s location at a readymix plant or via a dedicated on-site spray plant that requires space to operate. What we did, was create a system that allows us to make sprayed concrete and supply it to silos – similar to the way we supply mortar – which can then be delivered straight to the site of a project. It means that our customers gain access to ready-to-use sprayed concrete at the flick of a switch, 24 hours a day.

“The success of this business unit has seen it go from being a start-up operation to representing around 20 per cent of CEMEX’s UK mortar business turnover in an incredibly short space of time. With the sheer size of some of the infrastructure projects on the horizon that will require tunnelling – such as HS2, Cross Rail 2, the Lower Thames Crossing and London Power Tunnels – there will continue to be a huge demand for sprayed concrete in the years to come, which will drive much of CEMEX’s UK mortar division’s growth going forward.”

Future positivity
Speaking of the future, Michael – and many others within the construction sector for that matter – admits that immediate outlook for 2020 is difficult to predict, particularly in the UK where, at the time of our discussion, a General Election campaign is in full swing. Longer-term, however, things look promising. “In terms of mortar demand in the UK, there is enormous pent-up demand for new homes to be built and political will on all sides to build up to 300,000 new homes,” he adds. “Under the right circumstances, I believe that after the first quarter of 2020 we will see a release of some of this demand, house builders will pick up production and that will make next year a very good one for mortars. On top of that we have the sprayed concrete business which, as previously discussed, we are very optimistic about.

“From a personal perspective, I have never worked in a business where I can see so much future positivity as that which I can see for CEMEX Mortars and CEMEX’s sprayed concrete activities. With the many positive factors that we have discussed coming into play over the coming months and years, I am absolutely convinced that this is a business that is set to be extremely buoyant into the 2020s and beyond!”