Back to Profile Gallery > Colorado Construction and Engineering

Colorado Construction’s work on some of the most remarkable buildings in Scotland has elicited the appreciation of the public, making the company one of the hottest names in the Scottish construction industry 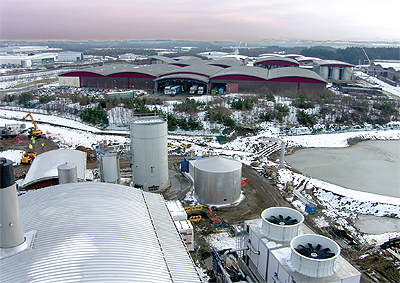 picked up another accolade for highest climber in the SME300 table as it leapt an astonishing 159 places to rank 73rd in the listing. Evidently, the Livingston-based company has earned itself a prominent position among the elite construction businesses in Scotland.

“Our success is down to the great team we have at Colorado Construction and Engineering – we aim to deliver above and beyond our customers’ expectations, resulting in over 85 per cent of our business coming from returning customers,” Managing Director, Ian Bownes, commented after Colorado Construction was presented with the award.

This philosophy means that the business cherry-picks the best people to join its team. As confirmed by Ian, this policy is paying off and Colorado Construction is now a much sought-after service provider across multiple sectors. Its skills include the refurbishment and renewal of listed buildings, the construction of one-off luxury homes, and the construction of distilleries, visitor centres and maturation warehouses.

One of the most impressive projects with which Colorado Construction has been entrusted is a two-year-long scheme to restore and enact changes to several core aspects of The Palace of Holyroodhouse. While Ian can’t share many details about this significant (and confidential) project, it is worth bearing in mind that the whole of the site area is Scheduled as an Ancient Monument and the buildings on the site are included on the List of Buildings of Special Architectural and Historic Interest, Category A. This does give a solid indication of the quality and reliability of Colorado Construction and as Ian confirmed: “The core aims for the business focus on exceptional delivery every time.”

Another speciality of Colorado Construction is the construction of distilleries. Since its inception 14 years ago, the company has constructed or expanded nine distilleries, and has built more than 30 maturation warehouses, a cooperage, bottling hall works, tank farms, and workshop structures. The business works for key clients throughout Scotland and the islands and has built up extensive experience in dealing with the logistical challenges in building distilleries in remote locations, as well as in Edinburgh’s city centre.

Best practice
A perfect example of its capabilities in this area is the £35m Glen Turner Distillery project, which produces 25m litres of whisky per year, which was assessed by the Scottish Construction Centre as an example of ‘best practice’ of construction procurement. The award was based on the level of savings that were delivered by the Colorado Construction team while constructing the project. As further recognition, one of Colorado’s founding directors, Gary Gibson, received a Construction Manager of the Year Award from the Chartered Institute of Building in acknowledgement of the exceptional overall management of the project, bringing it in on time and budget, and undertaking the construction while the building design was still ongoing.

Demonstrating an ability to work anywhere, no matter how remote, Colorado Construction has constructed distilleries in far flung locations such as Raasay, Campbelltown and Elgin. Colorado also constructed the second ever distillery to be built on the Isle of Skye, creating a new distillery, visitor’s centre and exhibition space into an existing listed building for Mossburn Distillers at Torabhaig. This involved the detailed restoration of the c.19th century farm steading on site, retaining its historic features, while configuring the building to hold the new distillery and visitor’s centre.

In addition to the remote location, the project included a number of technical challenges. The first was to install the new distillery process and supporting structural and services infrastructure into the existing historic whinstone steading building, which had deteriorated considerably following a long period of neglect – the walls needed some extensive structural work, as they were ‘pushing out’ at the head by some 350mm.

The works also included the complete re-roofing of the project, utilising recycled Ballachulish slate, all cut and dressed on site prior to the re-roofing exercise. The new roof was constructed to incorporate a removable section over the stills hall to facilitate future maintenance or replacement of the copper stills. The recovery of the stone walls took nearly two years to complete utilising the company’s own stonemasons.

At the west end of the existing steading building, a new mash house has been constructed to hold the milling equipment, steam boiler and associated plant. The project also included extensive reshaping of the land around the distillery to construct a cooling pond – the distillery utilises process water from the Alt Breacach River, while the cooling water is extracted from the Torabhaig River and pumped up to the distillery. These required extensive infrastructure works for the wedge-wire filtration supply arrangement for the cooling system and securing the riverbanks.

The process and building effluent both required appropriate treatment to meet with SEPA’s requirements prior to being pumped through a time clock operated long sea outfall system, also undertaken as a part of the project.

Furthermore, the project incorporated an external high-level viewing platform, cobbled courtyard (reusing cobbles salvaged from across the site) and included the restoration of the waterwheel, midden walls, watering trough and dry-stone dykes. There is new car-parking, a new standby generator, and the existing farmhouse complex was brought back into use through refurbishment and alteration to form on site offices and accommodation.

Throughout the entirety of the contract, the dimensioning and work-scope needed to evolve to ensure the process equipment would fit well operationally and enhance the visitor experience. Now it is complete, the building itself has been fully restored to incorporate a new high-tech distillery with associated complex services and process requirements, at the same time as keeping an internal finish that embodies a feeling of age, and brings the historical aspects of the site to life.

‘Vertical distillery’
In another recent undertaking, the business was approached by Crabbie’s for the construction of the latter’s new distillery in Leith. While nowadays Crabbie’s is famous chiefly for its ginger beers, the brand has taken the decision to move back into the whisky market where it had considerable success in the past. The facility marks a kind of a homecoming for the firm, which was first

established at a former porter brewery in Yardheads, near Great Junction Street in Edinburgh, in the mid-19th century.

A new and very exciting project for Colorado Construction also commenced in January 2020, when the firm began works on the first ‘vertical distillery’ in the UK for Port of Leith Distillery. With its rich whisky heritage, Edinburgh’s Port of Leith was the epicentre of the industry and the site for the new distillery is located right on the edge of the harbour, next to the Royal Yacht Britannia and the Ocean Terminal centre. The bold and modern building will be a beacon for cruise ships entering the port and an iconic new structure for Edinburgh.

As a nine-storey structure, in an area with water on one side and the city of Edinburgh on the other, this project is one of the most complex builds in Edinburgh. Although the customer hadn’t initially planned to build a vertical distillery, the site for this development is compact and the vertical approach makes the most of the available land. Set over nine floors and containing stills for whisky production, lab spaces for analysis and experimentation, offices and flexible space for exhibitions and events plus a tasting area/shop, there is also a bar and restaurant on the top floor affording spectacular views across Leith, Edinburgh and Fife.

It is clear that Colorado Construction is no stranger to challenging and interesting schemes, and the wide variety of sectors in which it is able to provide specialist construction services is a testament to the versatility of its people and the dedication of its management team. In only 14 short years, the business has made a name for itself in Scotland and the high-profile contracts it has won as of late, are guaranteed to keep it in the limelight in the years to come.