Back to Profile Gallery > Commercial Marine and Piling

Commercial Marine and Piling Ltd (CMP) was founded in 1986 and has quickly established a reputation in the piling field for expansive expertise and the use of modern technology to achieve results,” begins QHSE Manager at the company, Adam Kiely. “Whilst piling remains a core part of the business, the acquisition of Branford Civil and Marine Ltd in 1999 has assisted the company’s controlled expansion and diversification into the field of marine civil engineering and specialist marine piling.” 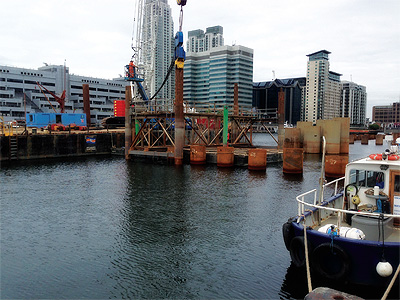 Based on the South Coast of England and with a key base on the River Thames, CMP is able to deliver projects across the UK, with the capacity to act as Principal Contractor on projects up to £7 million and as a specialist sub contractor on anything larger. With this unique position established, CMP has successfully completed projects for a diverse range of clients from individuals to government authorities. All work carried out by the company is underpinned by an unrivalled reputation for quality, safety and environmentally friendly results at competitive prices.

Perhaps demonstrating CMP’s comprehensive experience and set of capabilities most aptly is its recently completed work for Canary Wharf Contractors on Canary Wharf’s New Phase, a nearly five million square feet mixed development project to the east of the existing estate in London. The project, which involves the reclamation of 9000 square metres of land from West India Dock South, will eventually host more than 30 new buildings, including high rise towers, providing modern residential and commercial space at one of London’s key economic hubs. “We were awarded the design-and-build contract for a new cofferdam as part of the scheme,” explains Adam. “The design was for a combi-wall to be constructed with 160 1200mm diameter, 20m long tubular piles in-filled with H1807 sheet piles. It was then divided into two cells to allow dewatering to commence early and for the client to occupy the space after only 28 weeks. The remaining cofferdam had another 12 weeks to complete.”

Awarded in December 2014 with work starting in February 2015, CMP’s work began by clearing the pile line of obstructions with the use of a barge-mounted 60-tonne long-reach excavator, and later a larger 100-tonne excavator and breaker. “The combi-wall itself was designed by Byrne Looby and Partners who were very proactive throughout the project,” continues Adam. “It was installed using in-house designed, purpose built piling gates suspended from temporary piles to position the 1900mm casings, which were vibrated into the clay to create a seal. A second gate was installed on top of the casings and used to accurately guide the 20m long piles as they were lowered into position. This methodology ensured the tubes were accurately positioned enabling the infill sheet piles to slot into place later in the programme.” 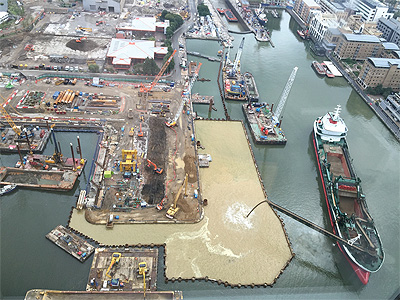 CMP’s work on the development also illustrates the firm’s ability to transfer its years of experience into innovative and flexible solutions, particularly relating to how best to deal with the dock’s silt layer. “The silt varied between one and three metres and it was originally planned to relocate it to a different area in the West India dock,” outlines Adam. “We proposed to leave the weak silt in place and install a grid of wet soil mixed columns in the silt from barge mounted rigs. During the pile line clearance it became evident there was more debris and obstruction in the silt than originally anticipated.

“The final solution was to leave the silt in situ and install overlapping panels of geo-fabric on top. These panels were installed using poles mounted on long-reach excavators to hold the fabric on the bottom as the ballast was evenly spread over them. A one-metre thick capping layer of ballast was installed to contain the silt and then the ends of the fabric were folded back down. The bulk fill of the remaining ballast was installed using the Scelveringhe sea dredger that only just fitted into the lock. This ship discharged 7000-tonnes of ballast in four hours, which meant it was able to enter the dock on the flood tide, discharge its cargo and exit on the ebb tide. This eliminated over a thousand lorry movements to deliver ballast.”

Eliminating this amount of road transport from the project was only one example of CMP’s careful consideration of the environment and surrounding infrastructure. Working closely with a number of local and national authorities, the company was able to mitigate risks associated with working so close to the Jubilee Line tunnels, continuously monitor water quality, and safely relocate over 800 fish during the dewatering process. Its health and safety record was also exemplary, thanks to its proactive approach to H&S. Underpinned by the strap line, ‘Keep your family in your heart, keep your mind on safety’, the firm implements regularly updated and fully comprehensive RAMS documentation, daily site intervention scheme and a familial communication channel that runs throughout the company encouraging open feedback, progress reporting and briefings.

Overall, successful completion of the cofferdam was a result of CMP’s innovative and highly collaborative attitude. “Canary Wharf Contractors were a great client, supporting us and very much working with us to jointly deliver a successful cofferdam in seven months,” adds Adam. In line with CMP’s progress the project will stand the company in good stead as it looks to maintain its current position in the market. With this in mind, continual investment into its operational capabilities will enable it to explore new opportunities in new markets, particularly in wind farm maintenance, over the coming years.