Since it was founded over 180 years ago as a small company manufacturing sisal and  manila ropes, Cordoaria Oliveira Sá has expanded rapidly to become one of the most advanced European manufacturers of synthetic and steel wire ropes. Oliveira now employs over 500 people worldwide and has established a reputation for high quality products at competitive prices. The company manufactures high-performance ropes, made from steel and synthetics, which are used in the fishing, mining, elevator, construction and oil and gas industries across Europe, Asia and America. Oliveira is the oldest family owned business in Portugal and is currently managed by the fifth generation of the Oliveira Sá family. 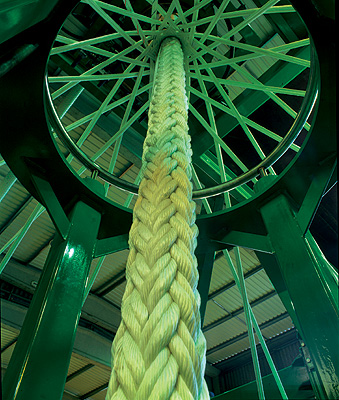 Export director, Rodrigo Oliveira comments on the company’s current activities: “At the moment we are very busy in all our markets, there is particular demand for industrial steel wire ropes, and we are fully booked with orders for the next eight months. We are increasing capacity in this area, which will see an increase of 25 per cent in production next year.” He adds: “Last year we were the biggest supplier of wire ropes for the European fishing market and in the marine market we are one of the major manufacturers of synthetic ropes for general mooring purposes in Europe. We’re also currently developing new constructions in fibre ropes.”

Since the company began the production of steel wire ropes in 1925, it has proved a successful area for Oliveira. The company offers an extensive range of steel wire ropes for multiple purposes. The main markets for the ropes are the fishing industry; the oil and gas industry, where they are used for the cranes at oil platforms and deck cranes on installation vessels; and the construction industry where non rotating steel wire ropes are used in mobile cranes, tower cranes and crawler cranes. In 2003, business in this area developed considerably when the company purchased several machines and the inherent market share from a closing Spanish competitor and in 2005, Oliveira successfully supplied the steel wire ropes for shipping company  Miradouro’s new trawler. In February of 2005 Oliveira was approved as a manufacturer in accordance with the requirements of Lloyd’s Register for Steel Wire Ropes with a maximum diameter of 60mm and then in October 2007 marine surveyors, Germanischer Lloyd awarded the company a certificate following the independent testing and certifying of its steel wire ropes of up to 80mm in diameter without end attachments.

In 1989 Oliveira embarked on a joint venture with the Verto Group and built a new factory in Paredes, Portugal. Four years later Oliveira bought out the Verto Group’s share in the Paredes factory and also created a subsidiary company in the Rotterdam harbour in Holland, Oliveira Holland B.V., which deals with distribution to northwest Europe. Rodrigo explains: “Oliveira Holland B.V. is currently the biggest distributor of mooring ropes in the area. Opening the second production site was a strategic move allowing us to be fully booked with mooring rope orders throughout the year.” The Dutch market includes the agricultural and horticultural sectors, the shipping industry, the offshore industry and industrial companies. 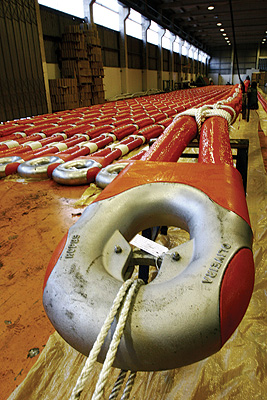 The company’s strengths lie in its high quality products developed over years and its dedication to providing outstanding customer satisfaction. The company has grown to become one of the most advanced manufacturers in Europe, supplying its synthetic fibre ropes to some very specific markets including the offshore industry. Rodrigo explains why he believes Oliveira has the edge over its competitors: “Being a manufacturer of fibre as well as synthetic ropes gives us a big advantage over the competition. All our ropes for the offshore market are fully certified in accordance with the latest guidelines and we are one of the few companies that can fully deliver all the construction needs of this market.”

Another of Oliveira’s strengths is its well-equipped modern laboratory, which controls the quality of its products and carries out tests and studies well ahead of applicable International Standards requirements. In addition to the Germanischer Lloyd certificate, the company has attained ISO9001 certificates for quality management. The company was awarded the certificate in February 2004, following a visit to both factories. The company also has a research and development department, which constantly works to develop new products and applications. However, Oliveira is not content to stop here in pursuit of recognition for its outstanding track record in safety and quality management systems. Rodrigo comments: “The main goal of our organisation is to supply quality products to our customers at a reasonable price. We also want to be able to guarantee the safety of workers, which is why we are working on the implementation of a health and safety system with the goal of achieving the OHSAS 18001:2007 certification before 2010.”

In terms of the current conditions of the industry across the world, Rodrigo is realistic but remains optimistic about the future: “The oil and gas market had a slow start this year, but we are now seeing new projects and foresee a busy second half of the year. Although the industry in Europe is generally slowing down, we have new products for the Asian market, which is growing very fast.”

Rodrigo has high hopes for the company in the coming year: “Our main target in the next 12 months is to increase productivity; we have been working with an external audit company since last year with the intention of providing more support to our workers, expanding the maintenance department and decreasing the stopping time of our machines to ensure that higher productivity can be achieved in 2009.” Beyond that he is highly confident about the longer-term future of the company: “I think that the future of Cordoaria Oliveira Sa in the next five years is protected. I don’t foresee any decrease in sales, in fact I predict an increase of at least ten to 15 per cent per year.” Cordoaria Oliveira’s commitment to providing customer satisfaction and ensuring the safety standards of its products and working environment have made it a leading European manufacturer and its continuing dedication to quality and development means the future looks bright for the Portuguese company.