When Sean Hoare took over the running of the small groundworks business that was established by his father in 1993, he set in motion a series of events that would give rise to one of the UK’s fastest growing civil contractors. This would culminate with the rebranding of the business into ECL Civil Engineering (ECL) in 2010. It was in this year that Sean would also be joined by Steve Tysoe who, having successfully sold his previous business T&W Civil Engineering in 2007, returned to the industry as ECL’s Director. 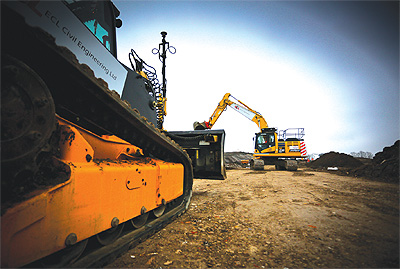 “When I came into the business it was a £10 million operation,” Steve begins. “In the seven years since, myself and Sean have worked hard to develop and grow ECL into what it is today, which is a company that works diligently in supporting the country’s leading housebuilders on major new build developments. Through a sustained period of organic expansion, a buoyant market and by steadily increasing our market share we have grown to the point where, in June 2017, our latest filed accounts, showed a £79 million turnover. Based on the first quarter of 2017/18, we anticipate recording a turnover in next year’s accounts in excess of £100 million.”

Branded plant
The past seven years have seen Steve and Sean embracing the idea of continual investment in order to enhance ‘ECL’ as a brand that has become recognised for its expertise, service and execution. One of the results of these actions is a sizeable plant inventory of approximately 300 machines and associated equipment, and a fleet of 180 vans, all of which is branded with ECL’s logo. “To our mind, there is no other competitor present today that has put, pound for pound, as much investment into their plant and machinery as we have done in a relatively short space of time,” Steve states. “Amongst our inventory, you will not find a single item of plant that is over three-and-a-half years of age, meaning that the branding is always fresh, the machinery looks the part and is maintained accordingly.”

ECL’s attitude towards investment also extends to technological advances and innovation, with the company always on the lookout for the latest techniques and solutions that will allow it to further increase the efficiency of its working practices. For example, virtually all of ECL’s 20 tonne and above excavators come equipped with the latest GPS systems. This allows each individual unit to be modelled towards its own specific task, and when and how said task is completed. This also allows the company to ensure the optimum speed of delivery when it comes to its services, whilst at the same time minimising the reliance on manual labour where possible, which is an area of increasing importance in today’s construction market.

While understandably keen to maximise productivity, ECL still strives to ensure that every single activity it undertakes is done in a safe, responsible and faultless manner. This attitude has seen it obtain industry standards such as SMAS (Safety Management Advisory Services) Worksafe Contractor and CSCS (Construction Skills Certification Scheme) certifications, as well as ISO 9001 and 14001 accreditations.

Exciting projects
The aforementioned efforts of the company have resulted in its involvement in a host of large development projects.

“We are grateful to our core clients in affording ECL the opportunity to grow and to specialise in large scale developments, which is why these projects each feature no fewer than 100 new build homes. This expertise can currently be seen in action on a 600-house consortium project in Wooton, Bedfordshire in partnership with Bellway, Taylor Wimpey and Bovis Homes and a large 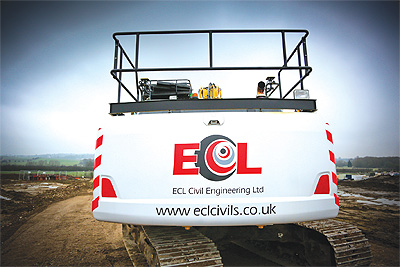 development at Stanton Cross, Wellingborough. The Stanton Cross project is being promoted by Bovis Homes and will include the delivery of 3650 homes.”

Steve and Sean are conscious of the need to invest in the next generation of civil engineers, and as such make a concerted effort to engage with students, school leavers and graduates in the hope of attracting some of the best and brightest into a career in civil engineering. “We ourselves have a relatively young surveying department, a number of which have entered the business as school leavers and have been provided with extensive training under a management-trainee basis in order to gain the relevant qualifications,” Steve says. “Every year we take on several new individuals and bring them into the office environment, providing them with an opportunity to begin an exciting career path.”

Retaining control
For Steve, the key to ECL remaining at the forefront of the industry at this exciting time is simple. “It is all about retaining control,” he affirms. “What is interesting about the way that we run the business is, while we have seen a lot of organic growth over the last seven years, we do not go out there and actively try to attract new clients. We have actually managed to achieve our growth by reducing our client base and in doing so we have ensured that the service we provide to clients is infinitely better than if we were to have spread ourselves too thin.

“In this game, we believe you are much better off working with fewer clients and doing it well rather than diluting your service offering by trying to placate too many at once. In doing so we have created a situation where we share a two-way relationship where our clients want and value us, and we want and value them, producing the ideal environment in which to grow.”