Back to Profile Gallery > engcon

By utilising engcon’s world-leading tiltrotators and accessories, the activities of its many customers have subsequently become more effective, efficient and profitable
It’s all in the wrist

By utilising engcon’s world-leading tiltrotators and accessories, the activities of its many customers have subsequently become more effective, efficient and profitable 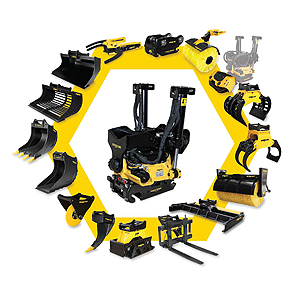 and its bucket, tiltrotators have become an essential component within the construction industry in the Nordic countries since they were first introduced to the market in Sweden in the early 1980s. A hydraulic attachment/tool that is typically mounted onto an excavator, a tiltrotator allows the bucket to rotate unhindered around its axis through 360 degrees and gives it the ability to tilt up to 45 degrees, thus increasing flexibility and precision. With its quick coupler and rotary swivel, the tiltrotator can also use extra hydraulic functions to power and manipulate other work tools below.

Established in 1990, engcon is today not only one of only three major manufacturers of tiltrotators, but is also a world-leading supplier of effective, efficient total concepts for excavators. Standing for innovation, know-how and experience, engcon’s tiltrotators are suitable for every type of excavator, from 1.5-to-33 metric tonnes, regardless of make or model. Not only does the actual process of excavation become more efficient and profitable with the engcon tiltrotator, but it also minimises the number of machine repositionings, thus reducing damage to land and increasing site safety. The amount of spoil is also reduced thanks to its ability to excavate more precisely.

Construction & Civil Engineering previously spoke to engcon’s Chief Executive Officer, Krister Blomgren, back in 2014. Catching up with him in early 2019, it is heartening to hear that the last few years have been good for the business. “We have been growing fast in the time since we last spoke,” he begins. “While much of this growth has come from our traditional market of the Nordic region, the last two years in particular have seen our products gaining a stronger presence and higher level of interest across other European countries, and in the Asian, Australian and United States markets. Together, this has resulted in a, more or less, doubling of our turnover since 2014.”

A major driver of the company’s success in the years between our two conversations with Krister has been the development of its ‘2-series’ generation of tiltrotators. Setting a whole new standard, the latest generation spans the entire range of excavators, from two metric tonnes to 26 metric tonnes, and comes with a host of new advantages that further increase profitability and flexibility. “The development and subsequent success of our 2-series generation of tiltrotators highlights our ability to work with customers and end users to determine their engconrespective needs, and this has helped to make engcon twice as large as our nearest competitor,” he continues.

The company is also responsible for creating a number of key products that can be combined with the tiltrotator, all of which are retrofittable. These 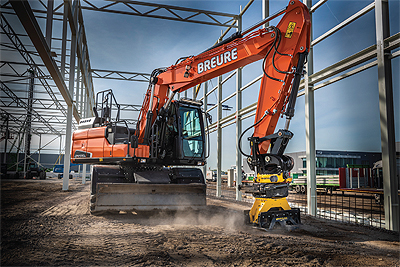 products include the Q-Safe, one of the world’s safest quick hitch locks that is engineered with innovative safety functions and an effective warning system, and the EC-Oil automatic quick coupler system, which is now included as standard. Meanwhile, the engcon positioning system (ePS) provides maximum awareness of bucket or tool position, making manoeuvring easier and safer, and DC2 is the company’s proportional control system that monitors the performance of hydraulic and electrical systems.

As previously stated, a good proportion of engcon’s growth in the last several years has come from the acceptance of its tiltrotator products internationally. As part of its own expansion plans, the company announced towards the end of 2017 that it had opened its North American headquarters in North Haven, Connecticut, from which it would establish a distribution network in the United States and Canada. “2018 was our first full year in operation in the US, and we were very pleased with our performance,” Krister states. “We managed to create a lot of interest in our products and accessories, but we know that there is a lot more work to do in terms of educating people to the benefits of tiltrotators. We are under no illusion that it will take a number of years to truly scratch beneath the surface of such a large market, but the possibilities are tremendous and we feel that the winds are blowing in the right direction for us.”

The first few months of 2019 have continued the good pattern of growth for engcon, and in order to meet this the company has invested significant capital in new CNC machinery, which is being unveiled at its Strömsund facility in mid-March. “To date we have invested approximately six million euros into new machinery and equipment, with a further four million euros planned,” Krister adds. “With this investment, we will ultimately be able to produce up to four times more units that we presently do, which will make us fully prepared for market expansion.”

When engcon was formed, it was done so with the mission of changing the world of digging, and it is this aim that continues to drive Krister and the rest of the team forward each and every day. “We want to make the construction industry more efficient, flexible, safer and better for the environment, and our way of doing so is through the continued development of our tiltrotators, attachments and hydraulic tools,” he concludes.

engcon
Services: Produce and sell tiltrotators, quick couplers and other attachments for excavators