Back to Profile Gallery > Hartela

With decades of experience behind it, Hartela’s approach to innovative and high profile construction projects has seen it become a leading player in the Finnish construction industry
Innovation at the heart

With decades of experience behind it, Hartela’s approach to innovative and high profile construction projects has seen it become a leading player in the Finnish construction industry

With a history extending back 73 years, family-owned Hartela has established itself a strong and reputable position in the Finnish construction landscape. Founded in Turku and with a group operating across the Southern, Western and Oulu regions of Finland, the company has grown into a 300 million euro company with a number of high profile projects under its belt. “Hartela provides construction and project development services,” explains MD of Hartela Oy, Hanna Kolehmainen. “We mainly build residential and business premises and also industrial structures. For example, at present we are building apartment buildings, assisted living buildings, shopping centres, offices, schools, hospitals, factories, wastewater treatment plants and nuclear waste sites.” 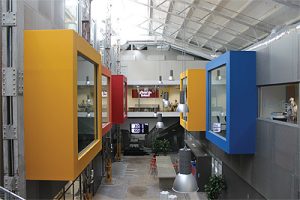 With a local focus, Hartela’s strength has flourished from the well-connected networks and relationships the company has established with regional authorities and clients. “We also have a really good brand, which with a long history behind it, is well respected,” adds Hanna. “This is then supported by the extensive technical knowledge and experience we have built up over time with a number of diverse and complex projects.”

One particular recent project that demonstrates Hartela’s competence and high regard in the Finnish construction industry is the Logomo Project in the city of Turku. “In 2011 Turku became the European Capital of Culture and to facilitate this and mark its occasion, the city wanted something that would remain permanent after the year was up, and to create a hub for creatives and artists,” highlights Hanna. “As a public-private-partnership project owned by both the city of Turku and ourselves, it really strengthens the Hartela brand. This PPP ownership structure is a unique one and can have its challenges but it has blossomed into a really positive relationship between us and the city.”

Renovated from an old railroad workshop, the Logomo centre has been developed into a central conference and culture centre, coming into the public attention for a number of events during the city’s year as Capital of Culture, including hosting a national TV talent competition. The centrepiece for the building is its main hall and lobby, which perfectly demonstrates both the innovative construction managed by Hartela and the flexible and adaptive environment offered by the building as a whole. The main hall sits upon a rolling stand with air bearings, which can be moved to allow the space to create three sizes for different events. As a result the space can host small functional dinner events to 3500 strong concert audiences.

In a process of ongoing development following 2011, the Logomo centre has steadily grown into an economic centre of creativity. As such in 2013, 5000 square metres of open office space were completed with space for up to 60 individual companies and over 300 employees. Dubbed Byrå, the centre forms a lively economic hub for the creative industry to encourage open discussion and synergies. In Spring 2015, Byrå was accompanied by an additional office space, Konttori, which currently hosts round 25 businesses and 200 professionals. Significantly, the construction of the business centre, which sits inside the old industrial building, is modular and flexible to encourage a process of continuous evolution.

In addition to the Logomo Centre, Hartela has also demonstrated its project skills in the recently completed Kangasala Art Centre, which was in the shortlist of five for the Finland Prize for Architecture 2015. Also serving as a cultural centre, the building is a striking multipurpose space, clad in iron oxide treated concrete to give a rust like appearance. Other ongoing work by Hartela includes the Keilaranta Tower Espoo Keilaniemi, which when completed will be the highest office building in Finland. 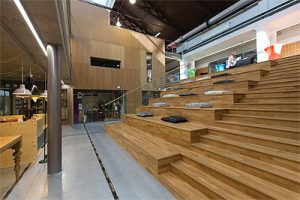 In its progress towards becoming a leading construction company in Finland, Hartela has recently trained its focus on its health and safety programme. “We have been actively working with this subject for about four years now,” says Hanna. “Health and safety is crucial to us winning and completing these high profile and iconic projects, and we are constantly striving to improve our record. We believe this happens through effective leadership, open communication and measuring results.”

Despite a stagnant Finnish economy, Hanna is confident that opportunities exist for the construction company and sees a particular path to further growth in the Tampere region of Finland, the second largest market area after Helsinki in Finland, where the company’s market share is currently relatively small. Positively, with a number of widely recognised, innovative and iconic projects constantly being added to Hartela’s portfolio the company sits on strong foundations to being able to secure this.

As part of a wider group, the outlook of Hartela is very much focused on taking collaborative steps towards an even more successful future underlined by growth and innovation. “Historically, the daughter companies in Hartela have been very separate and independent,” notes Hanna. “Whilst we are focused on maintaining our local presence and making sure decision making is also kept local, at the same time we want to increase networking within the group. For the first time in 73 years we are putting together a strategy for the whole group. This involves dividing the next five years into two separate periods as in 2017 we will be celebrating 75 years of Hartela and 100 years of Finnish independence. Until that time we will be focusing on profitability and the ‘We are Hartela’ theme. Over the coming years we will consolidating our presence within markets and in the longer-term we want to be the partner of choice.”