Back to Profile Gallery > Jehander

Founded in 1874, Jehander has 140 years of experience in delivering high quality aggregates materials to individual clients, contractors and government agencies
The vital aggregate

Founded in 1874, Jehander has 140 years of experience in delivering high quality aggregates materials to individual clients, contractors and government agencies

Operating as part of the HeidelbergCement Group, Sand & Grus AB Jehander (Jehander) operates in Sweden as a dedicated producer of materials for the construction industry and has a history that encompasses the evolution of the business as well as the products that it delivers. Since the company first began in its headquarters located in Stockholm it has provided the region with aggregates and today has expanded to also include operations within the Gothenburg, Gävle and Norrköping regions. In all Jehander operates pits at 22 locations across Sweden, which are dispersed between its four operational regions.

Although the company continues to operate its key market in Sweden, operationally the company has undergone several changes over its long history. The most significant change in the running of 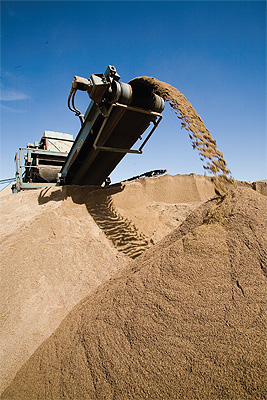 the business came between 2003 and 2004, with the decision to integrate the four companies operating into a single business that would take on its current name of Jehander. “The company looks very different today from how it did when I joined the company in 2001,” says managing director Pär Åström. “Today we are a single company with a much more centralised management structure. After the latest reorganisation, Jehander is a part of Aggregates Northern Europe, incorporating Norway, Sweden and Latvia, with the vision that business gives an exceptional return for all stakeholders by being responsible, profitable and transparent.”

The aggregates supplied by Jehander typically derive from gravel, sand and macadam (crushed rock) and are key ingredients in asphalt and concrete construction. Aggregates are often required to be on hand for such diverse applications as building and highway maintenance, road gritting, water purification, and flooring. Despite the challenges of the global economic slow down that began during 2008, demand of aggregates has continued to remain strong in Sweden. Furthermore as confidence begins to return to the market and build projects and infrastructure upgrades are becoming reinstated, the demand for building materials is set to increase still further. During 2005 80 million tonnes of aggregates were delivered throughout Sweden, today the amount required yearly in Stockholm alone is placed at around 11 million tonnes. Projects like the construction of a new Stockholm bypass, scheduled to commence between 2015 and 2016 will increase present requirement of aggregates yearly by several million tonnes. “The new b pass will see 20 million tonnes of rock flowing into the area via road and by port. We are the only company in Stockholm to have vessels and we have two quarry sites along Lake Mälaren and therefore can deliver by boat instead of just by truck,” Pär elaborates. “This will be a large project, which will increase the market from around 11 million tonnes in Stockholm by a further two million tonnes per year for at least the next five to six years. Although no contracts have yet been awarded, we feel that Jehander is in an excellent position to be apart of this.”

Trading conditions have remained challenging throughout the construction industry during recent history, for a number of reasons. Firstly the global downturn has naturally had far reaching effects leaving precious few markets unscathed within the construction sector. Additionally, 2013’s harsh European winter further compounded trading conditions with decreased windows for construction and a sharp rise in demand for winterised products. Despite the challenges this posed, Jehander was keen to not leave its customers wanting. “We had a very harsh winter last year that seemed to 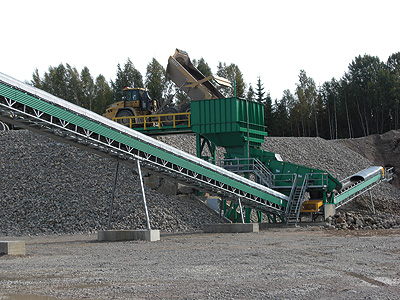 go on for six to seven months, which was quite a struggle for us,” Pär says. “However the business has always been very customer friendly and focused, so when customers demand for certain products is high we have always tried to make sure we can make the client happy and offer a good supply. So when winter grit was in demand we produced a lot of it for market, which was very expensive.”

Furthermore a key market challenge in Sweden concerns the levels of natural sand and gravel present in the nation’s territory. “Within Sweden there will be a lack of natural sand because sand and gravel beds are essential for water supply and local authorities have called for a reduction in the extraction of natural sand – the UK has the same problem. There is a tax on natural sand, which makes it an expensive product to produce and it is not possible to get a permit to open new pits so the supply is limited,” Pär says. “There is a need to have new products to compensate; one of these is to crush rock so it has almost the same properties as sand so that it can be used in concrete instead of natural sand. We call this manufactured sand and we crush the rocks to be rounder as to perform more like natural sand.”

Products like this coupled with a focus on high-demand regions such as Stockholm and Gothenburg have enabled Jehander to weather the challenges to the market and continue to remain strong. Throughout its 140 year history the company has demonstrated an ability to adapt to the needs of its client base and innovate solutions to best the challenges of the marketplace. As the market begins to move again, it has a strong foundation that is set to last well into the future.