Back to Profile Gallery > KazAvtoZhol

As Kazakhstan looks to become a leading global economy over the coming decades, KazAvtoZhol is tasked with developing a critical circularity system that enables the country to grow and perform on an international stage
International importance

As Kazakhstan looks to become a leading global economy over the coming decades, KazAvtoZhol is tasked with developing a critical circularity system that enables the country to grow and perform on an international stage

During his annual address of December 2012, Head of State Nursultan Nazarbayev of Kazakhstan announced the 2050-Strategy, a programme focused on implementing widespread economic, social and political reforms to position the nation among the top 30 global economies before the second half of the century. The strategy covers a broad spectrum of issues from improving utilities and trade through to developing the country’s infrastructure, and much of this began with a governmental restructure. In 2013, as part of this shake-up, KazAvtoZhol was formed as the national road authority primarily focused on developing, improving and operating the republican road traffic network. Developing the road and transport infrastructure of the nation is considered as one of the main priorities in the plan’s 100-step strategy. 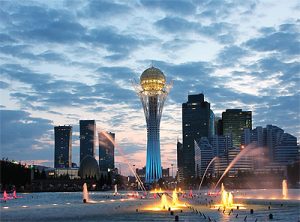 Speaking to Construction & Civil Engineering, Chairman of KazAvtoZhol, Ermek Kizatov explains why the country’s road network is so critical to realising the strategy’s vision over the next four decades. “According to estimates by experts in the transport sphere, the Central Asian region shall remain the major transport route for relations between Western China and Western Europe for the next 20 to 25 years,” he says. “The issue of developing international traffic attracts much of our attention at present, taking into account the various directions and volume of trade flow between China, Russia, the Middle East and European Union countries across this Eurasian territory. With the participation of Kazakhstan, a new architecture of transport corridors is being created to enable the country to compete with other global trade routes both on land and sea.” As globalisation deepens and international commercial relations continuously improve, the growth of cargo flow between the European and Asian continents is seeing a revival of the ‘Great Silk Way’. With Kazakhstan falling in the centre of this transitional region it is critical that it can provide the essential infrastructure to support such movements.

As part of this globalisation strategy, in April 2015, the Kazakhstan government approved the infrastructural development plan, named ‘Nurly zhol’ (‘Bright Path’). “The main direction of this programme is to develop the transport network of the Republic and its integration into the world transport system and today we actively proceed in this direction,” continues Ermek. “Under the programme fall 11 separate renovation projects across 7000 km of road. Corridors will pass from the capital, Astana, and out towards the north, south, east and west to promote this global integration.”

However, it is not just the importance of creating a necessary conduit for passing trade that drives Kazakhstan’s desire for an improved transport network, but also the need to nurture and develop its own economic performance on the global stage. “Roads turned America into an industrial country with a powerful economy and they helped Russia to expand and develop its territory from ocean to ocean,” highlights Ermek. “Historically, roads have also helped to promote industrial and agricultural production in Kazakhstan as well. In spite of the fact that air space and rail networks have become significant parts of the twenty first century, road-traffic routes have not lost their relevance and accordingly I am convinced that the road infrastructure is a strategic link in the economic, political and social development of any country.” 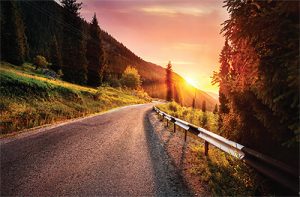 At present the public road network in Kazakhstan covers around 97,000 km. Of this, 73,000 km is classed as roads of public significance, whilst the remaining 23,700 km is considered routes of republican and international significance, and it is this latter network that exists as the primary focus for KazAvtoZhol. “Today, the powers of us as the national operator can be split into four columns,” outlines Ermek. “Firstly is the implementation of budget investment projects on the development of the public road network both of republican and international significance. Secondly is the organisation of construction, renovation, repair and maintenance of these roads. Then is the control of the course and quality of these development works and finally is the introduction of paid
traffic routes.”

One of the core goals of KazAvtoZhol under the 2050 programme is to increase transit capacity in the country. Delivery of this will be though numerous large-scale projects aimed at doubling capacity by 2020 and increasing it ten-fold by the end of the planned programme. To achieve this, the organisation has been declared the single operator for the maintenance and development of the road network. Under this power, it is responsible for attracting strategic investors into the road industry for the implementation of paid and public highway road systems, for coordinating the implementation of service on the road and for introducing payment systems on the network.

As part of such a major national project spanning the realms of political, economic and social development, improvements to the road network may only be one portion of focused attention. However, ensuring this improved infrastructure is implemented correctly is absolutely vital if many of the programme’s other visions are to be realised. With aspirations to become a leading global economy, one which plays a crucial role in facilitating a wider international economy, having a network of the necessary capacity and quality will be key to Kazakhstan’s journey into the future. As Ermek sums up: “The cities and settlements will be connected with high-quality roads and high-speed routes of all transport types but there is nothing like highways to unite countries and people.”

Services: National road authority for the Republic of Kazakhstan