Back to Profile Gallery > Keller

Upgrading Britain’s Victorian railways to face the demands of 21st Century travel require innovative solutions, like this one Keller helped devise this summer

The massive HS2 project may be making most of the headlines in the UK rail industry at the moment, but the need to keep refurbishing and improving the Victorian rail network is a vital part of keeping the country moving. 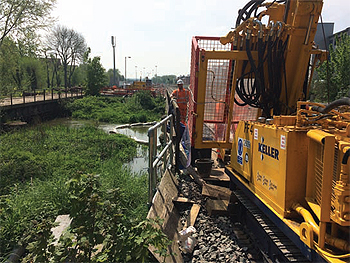 Keller played its part this summer by taking part in a £4.5m upgrade project at Castle Mill Stream, just outside Oxford, which also involved Carillion and TSP Projects.

TSP Projects was commissioned by Network Rail as lead designer for the Oxford Corridor Improvements works, a major development project to expand the capacity and future operations of Oxford station (and surrounding infrastructure). Just outside the station, the Castle Mill Stream bridge is a vital part of the Cherwell Valley Line. Situated on the railway line between Oxford and Tackley stations, it carries four passenger and goods lines in and out of the city. However, the bridge was reaching the end of its life with many parts thought to be in the region of 120 years old and therefore needed replacing.

The challenge to the engineers was not only to come up with a solution that addressed all environmental issues (as the bridge crosses a watercourse and is part of an alluvial plain) but also to allow this major line to remain unaffected during the works.

The plan was to replace the existing bridge superstructure with a three-span continuous precast concrete beam deck. The additional weight of the new bridge deck and ballast significantly increased the permanent loads acting on the foundations.

TSP Projects was provided with a scheme by Network Rail’s previous consultants that considered damming the river and providing full bridge replacement to rebuild the piers, abutments and bridge deck. However this scheme was costly, environmentally risky and also a lengthy programme mainly due to engagement with external bodies.

As with all schemes of this nature, programme duration was key hence TSP consulted with Keller at an early stage development in regards to the buildability of a micropile (Pali Radice) system to underpin the existing structures.

This early contractor involvement by Keller was key to allow TSP not only to design the micropile system but also to demonstrate to both Network Rail and Carillion (Network Rail’s contractor for the bridge works) that its design was buildable.

One key area of risk for TSP was the very thin nature of the central piers and the inability for both the micropiles and pier structure to take excessive shear forces (generally from braking of trains). However, the decision by the TSP bridge design team to design the structure as a continuous deck allowed all traction and braking loads to be resisted by fixed bearings at the south abutment allowing the pile rake to be adjusted.

Keller’s role, as a foundations specialist, was to help formulate a plan to strengthen the existing foundations to carry the extra weight of the new concrete deck, and then carry out the works while keeping to a very tight works timetable. And all this while keeping the trains running. 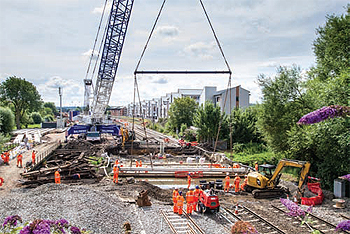 An added complication was the nearby Castle Mill stream, which is fed from Oxford flood plain, a Site of Special Scientific Interest. The stream couldn’t be drained to allow underpinning from below so it was decided to do the work during blockades (when the line is closed temporarily) and drill between the rail tracks and sleepers into the deck and form the piles.

Pali Radice (literally ‘Root Pile’) has been extensively employed throughout the world as an underpinning system for strengthening existing foundations, which are settling or are required to support increased loads. When used for underpinning, the piles are formed through the structure thereby achieving a direct connection between the foundation and a competent subsoil strata, providing the structure with ‘roots’ and hence giving the piles their name.

The equipment and techniques employed have been designed to minimise vibration and to operate with minimal noise. They can be employed in areas of restricted access and have the ability to bore

Network Rail agreed to the use of the Pali Radice system and the TSP and Keller team got to work. The team cored through the timber deck, then into the sandstone capping of the brick abutment and core to 4-5m below deck level through the brickwork. They then advanced their 220mm casing to the clay at approximately 8m below deck level, then drilled out the clay to depth.

Keller staff had to dry core into the abutment to avoid water contamination of the stream, and then air/water flush the casing through the brickwork. They then formed the pile in the clay using dry augering techniques and reinforced them with a circular hollow section tube and a threaded bar over the full length of the pile.

In all, the project involves a total of 60 micro piles of 220/190mm diameter installed at angles of 6 -15 degrees from vertical. The piles ranged in length from 16-32 metres. The works were carried out during a series of train stoppages over nine weekend possessions, some day shift working when the line was open line and a four-day line closure.

“The project presented many difficulties,” said Matt Large, Keller General Manager. “Apart from the tight timetable – we finished our work on a ten-week timetable with just three hours to spare – we had other factors to consider. We couldn’t drain the stream, we had to keep the train line dry and we had to be aware of environmental considerations for the residents in the local area.

“This all pointed to a Pali Radice solution because we could core and form piles with the same machinery. By dry coring we kept the lines clean and didn’t pollute the watercourse.

“Network Rail was very happy with what we achieved.”

TSP Associate Director (Geotechnical & Geoenvironmental), John Judge, said: “This was one of the most challenging designs and construction projects using this impressive method. The limited size of the piers together with the complex access from above made both designing and location of the piles a challenge. However the joint working of both the Bridges and Geotechnical team at TSP together with the early involvement of Keller in the philosophy really contributed to bringing the project in on programme.”

With the strengthening work complete, Carillion was then able to move in over the rest of the blockade period to remove the old timber deck, replace it with the concrete one and reinstate the rails to open the Oxford Corridor back to rail traffic. This was, in addition, a major feat of engineering in itself.