As one of the top three suppliers to the piling industry, Kierbeck Thames Ltd has a history that dates back to 1977
Core strength

As one of the top three suppliers to the piling industry, Kierbeck Thames Ltd has a history that dates back to 1977

Following its establishment, Kierbeck underwent a period of rapid growth that lasted over two decades, reflecting its offering of an express service to contractors within London and the Home Counties. In 1990 it acquired the premises now known as Kierbeck Wharf, holding an enviable 200 metre berthing facility on a tributary of the River Thames.

From its new position, the business was able to start importing steel competitively from Europe and Turkey, as well as supplying contracts on the edge of the River Thames with ease. With this new facility it grew rapidly through the 90’s before setting up a pre fabrication facility in 2003, principally producing pile cages, beams, and diaphragm walls enabling contractors to save time on 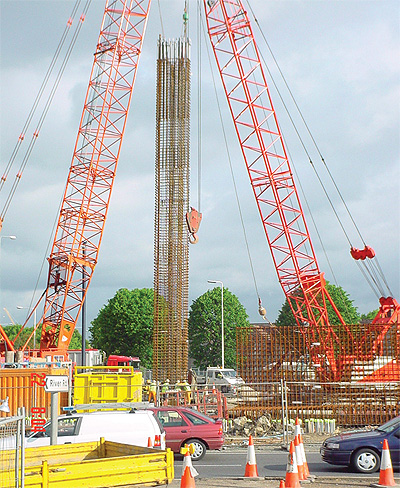 site by literally dropping the prefabricated reinforcement into place. Assembled and welded up in cages, this has become an added value service provided beyond the straightforward cut and bent service, which historically it had done.

Water side projects such as Canary Wharf, infrastructure for the Olympic Stadium, Aquatic Centre, Westfield Shopping Centre (Stratford), and Millennium Bridge, to name but a few, have become pinnacle references to the capabilities of the business. Throughout its trading past Kierbeck has continued to build on that reputation and currently serves many Crossrail projects with a combination of pre-fabricated and loose bar solutions, supporting projects across the capital, saving programme time, and ultimately disruption to the city of London.

“Handling over 45,000 tonnes a year, we are the only such company with a facility within the M25, and the only one with dedicated wharfage facilities,” says Brendon O’Connell, general manager. “Such a position continues to prove advantageous, and we have been a key contact for contractors tendering for the Thames Tideway Tunnel,” he adds. Being able to barge fully assembled products directly out of its own wharf to the newly established berthing facilities at Blackfriars Bridge will benefit the company as the contracts are awarded.

“The proximity of the factory to London means that we are able to offer a very accurate timeslot to clients, a necessity for ensuring works are completed to schedule in a very demanding climate. The ability to reach the job site quickly is a major advantage, not just in keeping to the schedule, but being able to react to last minute requirements from clients, should variations to the plan occur. That very quick service has for a long time counteracted any delays to the concrete pourers that may have occurred, and the perception of Kierbeck with the London badge, is big repeat business marketing for many customers, and enables us to give an un-paralleled service,” explains Brendon.

Alongside the mainstream reinforcement operations the business also provides a unique EASY LOK connection system, which it developed in 2006. “This is a safe splicing system that enables the operative to join sections of cages together without risk of injury to hands and fingers. Access to locking nuts from an external position provides a completely safe scenario should the cage move, and the method is much faster than traditional solutions. On a recent Cementation project at Borough Station the system was a key factor in ensuring we completed the task within the four-hour possession time window available,” highlights Brendon. 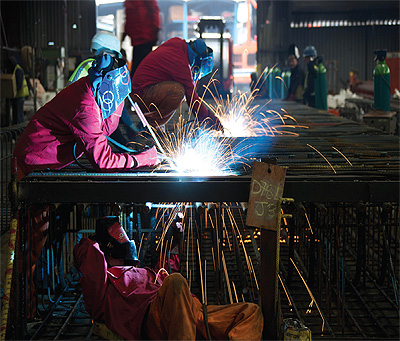 Whilst its principle focus until recently has been EASY LOK, which is the only splice system in the country to have CARES approval, its R&D department has been actively working to produce a new SONIC tube coupling system. As one cage is placed on top of another, the remote arm joins the two tubes without the requirement of the operative putting his hand inside of the cage. Currently available as a prototype, the full launch is expected into the market later in 2015.

Current projects such as the Crossrail contract at Liverpool Street, working with Morrisroe on the Albert Embankment, the prestigious project of the Victoria and Albert Museum extension, demonstrate its comfort in delivering high profile contracts time and again. Holding on to that position in the market is not only an indication of the core fabrication skills, but further more an indication of the steps the company takes to ensure that the projects are able to flow with ease, as Brendon points out: “We are just finishing a contract on Victoria Dock, part of the Crossrail project. We engineered a project specific design using glass fibre reinforcement in replacement of traditional concrete or steel reinforcements, enabling a tunnelling machine to break through in significantly less time. We have also been able to offer this innovative solution to a number of contractors, either as a completely glass fibre reinforcement, or as a material combination at different levels.”

With over half of its yearly order already secured for 2015, the market has shown very healthy steps in the ongoing emergence from the recession six years ago. Despite many contracts being put on hold in the run up to the 2012 Olympics, the post-Games conditions have seen the upsurge of many signature projects, as well as a lift in the high-rise property market. In response to the expanding workload, and keen to be able to react to the growing demands of its customer base, the business recently introduced a double shift system, providing business coverage for up to 17 hours a day, and the capacity to work around the clock should demand require. Such growth can be easily fed from its well-established training programme, through which a number of current employees trained, resulting in a very multi-disciplined team.

As the change in shift patterns matures into its second quarter of operation, increasing capacity is a key vision for the business in the months ahead. “Currently fabricating 200 tonnes of material a week, we expect to lift that to 300 tonnes a week. Pre-fabrication is becoming ever more important to the industry, particularly on the congested sites within the M25 envelope. Our drive for 2015 is to continue increasing that, whilst maintaining the other services within our business, complemented by our success within research and design,” concludes Brendon.

Services: Pre-fabricator and supplier of reinforcing steel to the UK piling industry