With a company history dating back 67 years to 1947, Milbank Concrete Products has a proud reputation and a robust presence within the concrete industry
An innovative history

With a company history dating back 67 years to 1947, Milbank Concrete Products has a proud reputation and a robust presence within the concrete industry

The company was founded as Milbank Floors by Geoffrey Milbank in Chelmsford, Essex to produce precast flooring products of his own design. The spirit of innovation endured and by 1952 the firm had started in the manufacture of prestressed, inverted channel and beam and block concrete floors. With the following decade pre-stressed precast concrete agricultural frame buildings were added to the company’s range as it continued to innovate and grow. 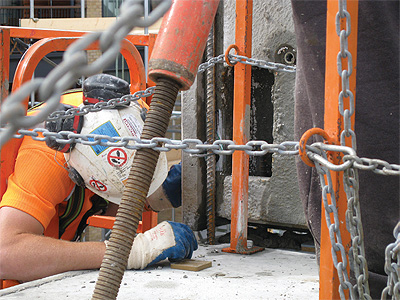 Following the death of Geoffrey Milbank in 1964 his son, John Milbank took over the running of the business. Jeremy Milbank joined the company during the 1970s and by 1980 Milbank Floors began the manufacture of 150mm deep beam and block floors for use in ground floors in houses. Shortly after in 1985 the firm moved to a six acre site at Earls Colne, Colchester and built a new factory while expanding its product line to include 180mm beam and block upper floors for separating floors in flats. Milbank Floors continued to develop strongly throughout the 1990s and in 1992 introduced seven beds 100m long to produce pre-stressed hollowcore floors (75-250mm deep), which replaced the beam and block upper floors.

The business continued to grow in line with its expanding product range and by 1996 a new building was erected for the manufacture of bespoke precast products such as stairs, landings, ground beams and Montex car park slabs. By 2000 a new site was purchased at Brandon, Suffolk and a new factory and storage facility built across ten acres to produce 225mm deep reinforced hollowcore slabs and associated precast units. In 2006 a further 15 acres were developed at the Brandon site to build a state-of-the-art pre-stressed hollowcore factory with 12 beds 150m long. This range was further extended to include 320mm and 400mm deep hollowcore, precast concrete wall panels and concrete columns and beams for multi-storey car parks.

When the global financial crisis hit in 2008, the UK construction industry was greatly affected. To survive it was necessary for the company to reorganise and promote the company’s tradition of providing practical, cost effective precast concrete solutions. By this time John Milbank had retired and his son, Sean Milbank, had taken over the reins and led the management team of himself, Andy Mayne and David Costin, where they were able to maintain the Milbank brand and form the business as it would be recognised today: “In 2008 the Milbank business went into administration and the current management saved the precast concrete business at Earls Colne, near Colchester, Essex. One hundred and fifty five directly employed jobs were saved along with over 50 indirectly employed staff that provide regular products and services to the business. Most of these people live locally and we are proud that we have managed to preserve these jobs and enable those households to continue with an income.”

Although John Milbank is still involved in the business in its present form, it is run by Sean Milbank as Chairman and Andy Mayne as Managing Director who has worked at the company for 24 years. “Milbank Concrete Products is the successor to Milbank Floors and continues to offer structural precast concrete products from Hollowcore and T-beam floors to staircases,” says Andy. 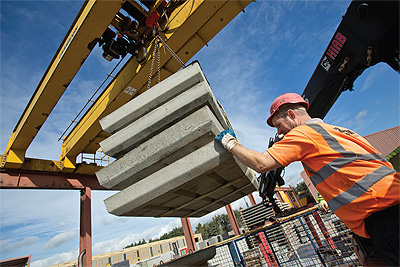 “Other than these fairly standard products Milbank produce ground beams, sea defences, stadium solutions and complete precast concrete structures. The business works with many of the national house builders and main contractors as well as regional clients, but it is also proud to continue to work with the small local builder or self-builder doing a one-off project.”

Milbank aims to offer a service that will help its customers to succeed in their projects and employs its own staff to design, manufacture, deliver and install its products. This is not widely considered the norm within the concrete industry, however Milbank believes that by directly employing staff, it will have better control over the service it provides. This also applies to the company’s approach to product innovation, which has remained core to the firm’s philosophy throughout its history. “As a company that employs engineers and designers to develop the designs for their clients the ability to develop new ideas at a project level is second nature,” says Andy. “New ideas have in the past predominantly come from the directors, however in 2013 the business decided to try to develop innovative thinking from within and established an ‘innovation circle.’ This consisted of a number of staff selected to work with Cambridge University’s Institute for Manufacturing who helped the innovation circle to develop id as that the company is now pursuing.”

As confidence begins to return to the global economy the construction industry is beginning to see an increase in activity. Although the past five years have proven challenging for the industry as a whole, Milbank has taken the necessary steps to place itself in a strong position moving forward. “As the volume of work over the last five years has been somewhat restricted due to the recession, the competition for all projects was immense and to enable us to win work and be realistically competitive we really had to look at our efficiency levels and our cost of manufacture to ensure that we gave ourselves every chance of winning our share of the work,” Andy elaborates. “With banks and lenders wary of the construction industry this meant that new more economical machines that were on the market could not be purchased meaning that we had larger maintenance costs and therefore had to have very tight controls on our spending. Although the situation was difficult it forced us to be as lean as possible, which will sand us in good stead over the coming months.”