Back to Profile Gallery > Sandvik Mining and Rock Technology

The ‘Stuttgart 21’ rail project will one day connect 35 million people across Europe, a feat that would not be achievable without the expertise and equipment of Sandvik Mining and Rock Technology

On 1 July 2016, the global powerhouse that is the Sandvik Group took the decision to merge two of its core divisions, Sandvik Mining and Sandvik Construction, creating Sandvik Mining and Rock Technology. With its operations organised in a decentralised business model, each respective product area of the new business was granted full independent responsibility and accountability.

Sandvik Mining and Rock Technology’s service offering covers rock drilling, cutting and crushing, loading and hauling, and materials handling. Its cuttingedge solutions and equipment are designed to help its customers to mine safer and more productively, wherever they are in the world. As of 2015, sales for the business were approximately 33 billion SEK and it was providing employment for some 15,000 employees in continuing operations.

“Products developed for the customer segments of mining and construction are based on common technologies with a similar aftermarket offering,” said Björn Rosengren, Sandvik’s President and CEO, at the time of the merger. “In addition, manufacturing units are already largely shared with front line resources. By joining the operations into one business area we achieve a leaner and more efficient structure. The decentralised business model enables an even clearer focus and faster response to our customers.”

The Sandvik Group is, and has been, an integral part of countless projects in multiple fields of industry throughout its existence. An ongoing undertaking of note is one of Germany’s largest infrastructure projects, the ‘Stuttgart 21’ rail project. The culmination of almost a century of urban development in and around the city of Stuttgart, the project will see a 1500 kilometre railway line responsible for connecting 35 million people in five countries, enabling travel from Paris, Strasburg, Munich, Vienna, and connecting Bratislava to Budapest. 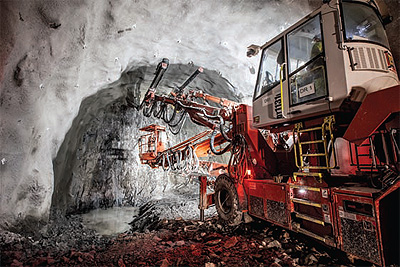 A part of the central West-East line, it represents a key piece of the jigsaw that is bringing Western and Eastern Europe together economically and culturally.

Three different consortiums will utilise Sandvik tunneling equipment and software as they carry out the redevelopment and refocus of the rail hub, construct four new stations and lay a 57 kilometre section of new track. Before work on the infrastructure can begin however, all parties involved are having to deal with the challenge presented by the unique topography and geology of the area, which requires the creation of new tunnels. Some of these new tunnels have been created using mining construction methods, with rock and stone being excavated from the mountain using drilling and blasting methods. The roof section of the tunnel is typically produced in the first stage of the process, following which the lower half is excavated until the complete tunnel profile is complete.

In total, 63 kilometres of tunnel will be excavated during the duration of the Stuttgart 21 rail project. In order to achieve this the project’s contractor has relied heavily on a fleet of 14 Sandvik tunneling jumbos and associated equipment. Further to this, Sandvik’s dry drilling system has proven itself to be invaluable, being the only proven technique to be used successfully at the projects Feuerbach sector, where a 2449-metre-long main tunnel is being driven through the 312 metre Prague intermediate heading. A series of meetings and site visits by Sandvik’s technical personnel resulted in the converting of the tunneling jumbos to the dry drilling system. This has subsequently provided a mobile solution for the 400 to 600-metre-long section which will see 475,000 cubic metres of material being excavated at approximately 80 cubic metres per pull.

Complicated geology is very much a shared trait across the project’s key locations. In Bad Cannstatt, the pipe roof method of driving is being used as it increases stability in the driving area. In the cover drilling process, the pipe roof system is being excavated bit by bit via a rotary striking motion that uses both of the Sandvik jumbo’s drill heads. In the area where the pipe roof is being excavated, some 80,000 elements are being installed as a result of the diligent work of 40 experienced tunnel miners. The machines being used in this phase of the project include four three-armed electro-hydraulic Sandvik D11 tunneling jumbos, one two-armed electro-hydraulic DD820 jumbo, one Axera D06 and one Commando 121 drill rig. Meanwhile, further to the southwest, at the Albabstieg consortium site, nine additional Sandvik jumbos and drill rigs will ultimately also be in use.

The Sandvik equipment used on the Stuttgart 21 project is being operated in conjunction with the group’s tunneling software, iSURE. An advanced new tunnel management and information analysis software package, iSURE provides specific support for the various stages of the drilling and blasting processes, guaranteeing smooth tunneling progress and reduced project costs.

Sandvik’s iSURE software produces the best results by ensuring that the interaction between drill design, explosive charge and ignition intervals is smooth and fully coordinated. This enables depth of pull, profile and base control, metres drilled, blast vibrations, vibration capacity, tunneling progress and costs to be measured, analysed and adjusted where necessary. Such an integrated process has proved to be absolutely vital to tunneling projects like Stuttgart 21.

While Sandvik’s advanced equipment and software solutions have won considerable praise during the life of the project to date, they would be of less use without the support provided by the group’s service engineers and technical support staff, whose actions have also found significant favour. Even when presented with the considerable geological challenges detailed previously, these individuals remain willing, able and capable of delivering what is required to support the tunnel excavation process.

As well as the long-term economic effects of the project, Sandvik has also placed considerable emphasis on the environmental future of the areas where work is being carried out. Upon completion of shell construction work, existing railway structures at the Albabstieg and the intermediate heading tunnels in the Lehrer Tal will be dismantled and the site installation areas will be backfilled. This will allow for local farmers to resume their work in unspoiled fields. A great deal of thought has gone into the environmental side of the project, with preservation of the locale given high priority with as much work as possible being rectified to preserve the unique look of the region.

As is the case with the work carried out on the project itself, Sandvik’s personnel and equipment have played a key role in maintaining this historic and environmental dimension, receiving considerable praise in the process. Sandvik’s efforts throughout the course of the Stuttgart 21 project are clearly reaping benefits for the environment, the consortia, the contractors and, ultimately, Europe as a whole.