Back to Profile Gallery > The KTC Group

The organisation has achieved unparalleled expertise in largescale excavation, earth moving and civil construction works, and has developed close relationships with Singapore’s leading infrastructure developers and large contractors. Thanks to the ready availability of critical earth moving equipment inhouse, huge capacity and seasoned project management expertise KTC’s clients are able to treat the company as a partner they can rely on for each and every project. 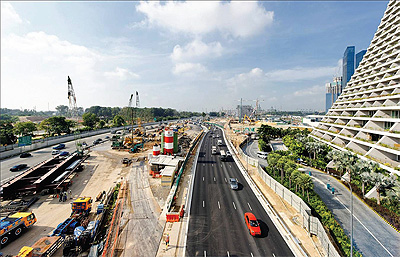 The Civil & Infrastructure segment of KTC Group is essentially the group’s flagship company – KTC Civil Engineering & Construction Pte Ltd. Yeap Yu Kong is director of infrastructure at the company, and he highlighted that the organisation had grown from humble beginnings into the impressive corporation it is today: “KTC began in 1988 as an earth moving and haulage contractor,” he began. “Over the years we have grown and developed, and in 2007/2008 became very active in a more extended range of industries.

“We expanded into the design and construction of expressways, and we are now active in the building of bridges, underpasses and substructures as well. Our focus is on transport related construction projects, and here in Singapore there is more than enough work to keep us active,” added Yu Kong. “Over the past two years there have been 25 billion dollars worth of projects in the market and we have been actively participating in all many major civil engineering and infrastructure projects including the construction of a road between TPE and Yishun Avenue 6, and the East- West Transmission Cable Tunnel.

“We are also involved with preparation work for a large rail depot in Singapore, which involves massive earthworks removal, as well as the construction of two very large bus parks or depot, for which we are responsible for preparing the ground and building the substructure and infrastructure.”

Yu Kong pointed out that KTC’s current work on a metro (mass rapid transit) station is the most complex in the company’s history. “This is located in a densely built area of Singapore, and this means that managing noise and consideration for the environment and pollution are big challenges that need to be managed,” he said.

Meeting the needs of projects such as this requires investment and innovative thinking, and these are both areas where KTC is at the forefront of the market. “We monitor various key measures, and one of these is to constantly to look at the latest technology and how it can be utilised,” he said. “So items such as low noise machines, like silent generators and silent excavators are useful when working in residential areas, and we both buy and hire items such as this.

“We also spend a lot of time educating the workforce and site management teams, and discussing issues with stakeholders, as well as encouraging new ways of working. The skill set and mind set must also change with the times as well, otherwise a company can’t move forward and grow.” In fact, Yu Kong credits the drive and commitment of the managers and staff of KTC for the company’s market leading position: “Sometimes it is really the team that make the difference,” he stated. “Commitment and dedication are key ingredients, and we have staff that have worked with us since we were founded in 1988 and we have been through the process of development together where the history and company culture are formed as driving forces.” 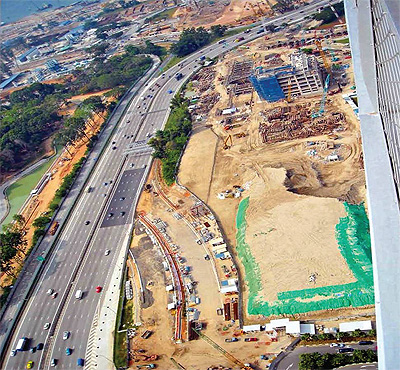 In order to continuously develop and maintain a high level of in-house engineering skills KTC also offers numerous scholarships at both undergraduate and postgraduate levels: “These are part of our succession plans,” commented Yu Kong. “There are presently four undergrad scholarships and two MSc scholarships, which were created because our company founder has always been very keen in investing in HR, he always believed that the right people at the right positions and good leadership are essential for success. These study programmes highlight that we are prepared to plan for the very long term – ten to 20 years down the line – because we know that we can’t move on without young leaders and young engineers and managers. We need these to survive.”

He added: “Of course there are other ways of looking at growth as well as accumulation of skills and management knowhow, including business turnover and quality control and safety management. In advanced markets such as the UK and US a lot of weight is put on safety so we are also emphasising this area in order to work to the same standards as these markets.”

For the rest of 2014 KTC has several major projects underway, and is actively involved in bidding on more underground and railway work. “We understand our strengths and do not see a need to diversify into other fields of construction immediately. That being said, there are investigations underway into the area of bored tunnelling, as this could be a promising area to develop.”

With so many projects on the cards the Singapore market is becoming increasingly competitive and international companies are arriving to compete for contracts, which makes it even more important for KTC to remain innovative and at the top of its game. Raising the productivity with advanced technology and skilled labour force with new thinking at the management level will raise the company’s competiveness in the industry. “This makes our willingness to embrace the new ways of working even more significant, as we have to change,” concluded Yu Kong. “We can’t stay with the old ways, we have to embrace the new while developed the existing skills to maintain our leading position.”