Back to Profile Gallery > Trafikverket

Trafikverket is the Swedish Transport Administration. One of its most ambitious projects is the 28 billion Swedish crown E4 Stockholm Bypass road infrastructure project, with massive potential benefits for the city and the country as a whole
The big bypass project

Trafikverket is the Swedish Transport Administration. One of its most ambitious projects is the 28 billion Swedish crown E4 Stockholm Bypass road infrastructure project, with massive potential benefits for the city and the country as a whole 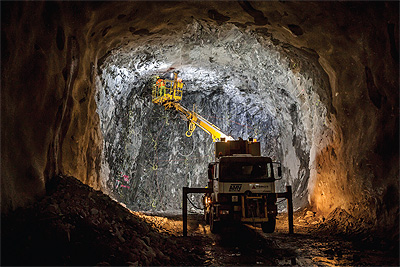 Bypass: “It is a very fast growing city, with between 35,000 and 40,000 more people coming in each year. In ten years’ time, that will be half a million, so there is a need to accommodate this rapid growth.”

He believes that the current road system in place is not enough to cope with this increased demand: “There is a strait in the middle coming down from Lake Mälaren, the third largest freshwater lake in the country, effectively cutting the route in half. Across this there is one high capacity crossing for vehicles, with four-by-four lanes, where previously it was three-by-three.” He then goes on to illustrate why this has proven difficult for commuters and other road users alike: “At the moment, the journey from the north can be anything from 15 minutes to an hour, with traffic jams a major problem. From an economic viewpoint, taking out these delays will make it easier to predict journey times for deliveries, something that will literally drive the economy forward.”

Johan explains the steps that have been taken to address these issues: “In 2009, the decision was made to invest around ten billion euros into local infrastructure, with a move towards increasing the mobility of both the roads and public transport. This investment was split between various, large road and railway projects, one of which was the Citybanan project, which increased the capacity across the Mälar straight from two to four tracks.”

While the economic benefits of this road building programme are massive, Johan is quick to reassure that construction will not be at the expense of the surrounding environment: “This is one of the biggest road tunnels in the world. What makes it unique is the ecological considerations of the location. There was the danger that it would cut through natural reserves and woodland areas, which is why it was decided to build underneath,” Johan confirms. Research has suggested that up to 150,000 vehicles per day could end up making use of this particular route into Stockholm, with Johan quipping: “It’s our response to the M25!”

In order to construct this, the deepest points of the tunnel are believed to reach almost 100 metres below ground, as Johan points out: “It has to be that deep, in order to ensure safe tunnelling conditions, especially since everyone will be driving underneath Lake Mälaren.”

Construction
“The job has been split into ‘regular’ and civil contracts, with 95 per cent on the civil side already awarded and underway.On the intersections, the surface work is ongoing. Tunnelling has been in progress since th start of the year, with ten percent completed thus far,” Johan analyses. The project has been an enormous undertaking. As well as the road itself, there has also been a programme 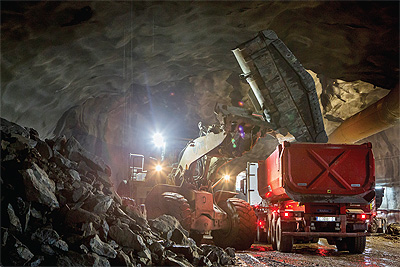 of expansion on the subway and within city centre areas around the lock that separates Lake Mälaren from the Baltic Sea. As Johan insists, though this is a challenge, there are a lot of professionals on board: “Experienced engineers, managers, designers and workers are all a part of this.”

While the idea is that the project will eventually make the roads less congested, there is the issue of where to drive while this is taking place, something that Trafikverket has had to be very wary of: “Methods have been used such as barriers, as well as safe meshes, in order to block off blasting areas and allow traffic to flow through. These have been effective thus far, so it is likely this approach will be used in future projects,” Johan affirms.

One potential issue that people are likely to be concerned about is what would happen in an emergency situation. For example, it would be vital to know what to do in the event of an underground fire. This has also been considered, as Johan explains: “A new water based firefighting system has been brought in, designed to hit the right areas, even if it is very windy. There have also beenmoves to monitor the air quality underground, to ensure it is safe for people travelling through.”

Safety is a high priority for the department, as Johan announces the organisation’s annual awards will be announced in the next couple of weeks: “It is about recognising innovation that helps make people safer.”

Johan clearly indicates what he sees happening in the next 12 months: “A lot of rock will be coming out as the blasting process continues. On the paperwork side, there are 6000 pages left on the contracts, with five huge ones to be awarded after the summer of 2018.”

Most importantly, Johan believes that the E4 Bypass project willleave a lasting legacy for the people of Stockholm and Sweden:“It will allow us to develop as a people, in business and with universities. It is about creating a social responsibility programme, and giving people jobs, both for those who are currently unemployed and those who are newly arrived to the area. When this is finished, it will make the city smaller and smoother, with fewer delays. Quality of life is definitely a big part of why we need this.”