Back to Profile Gallery > Vrijenban

Benefiting from long-term expertise in customised precast concrete solutions, Vrijenban has further strengthened its capabilities by acquiring BAM’s Dutch facility in Zuidbroek for the production of bigger precast concrete elements
In demand

Benefiting from long-term expertise in customised precast concrete solutions, Vrijenban has further strengthened its capabilities by acquiring BAM’s Dutch facility in Zuidbroek for the production of bigger precast concrete elements

Founded in 1911, Betonfabriek Vrijenban was originally focused on prefabricated concrete for utilisation in the construction of greenhouses. However, over the last decade the company has diversified its operations and taken on more complex and larger contracts within the infrastructure sector. Since 2011, this has also included work for the German market as increasing numbers of 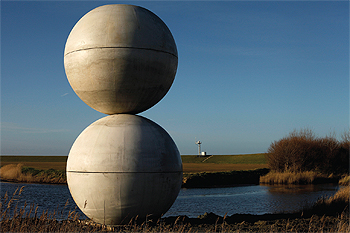 Operating four specialised plants for prefabricated concrete elements Vrijenban today stands out in a competitive market thanks to its focus on customised precast elements that are made to order for major design and construction projects as well as smaller scaled orders. Able to produce a varied range of work, from artworks to elements for infrastructure projects for the government, the company merges these capabilities with its own transportation service that ensures material is delivered to sites, as Theo van Baal, General Manager at Vrijenban, comments: “We have our own transport for the Delft area and we also transport our own cement; a large amount of transport is hired from companies with whom we have long-term relationships, creating the optimal conditions for co-operation.”

Able to deliver specially formed elements in any environmental class, the company produces prefabricated concrete groundwork, road and hydraulic engineering (GWW), rail, road and civil works from its factory in Delft. It is here that the company supplies products to a range of customers on a national scale in the Netherlands, including municipalities, provinces, architects and contractors; the company is also experienced in extensive export projects.

“Vrijenban has wide activities in the infrastructure sector, however, we are also active in the agribusiness; our trade name in this business segment is Den Boer beton and operations take place in our production facilities in Nieuw Lekkerland. Committed to creating tailor made solutions for our customers, we proceed where others stop. Recent challenging projects for us include work for Van Oord in Guernsey, where the challenge wasn’t to make a concrete sleeve, but to create it in the short time we had for production. We are able to make products for a variety of applications which is why we have won upcoming projects such as work on the sound barriers in Heerlen Area and the Klaprozenbrug project in Amsterdam,” says Theo van Baal.

The Klaprozenbrug project includes the construction of a new road and two new bridges to ensure easy access and strong public transport connections to Zaanstad, Amsterdam. While the new Klaprozenweg is due for completion in 2017, the new bridge is anticipated to take more time and is anticipated to open in 2018. “This is a notable project for us, as the bridge in Amsterdam is the shape of a Viking ship,” comments Theo van Baal. “Our capabilities in delivering custom solutions has enabled us to gain a core following of major national operating contractors; these customers 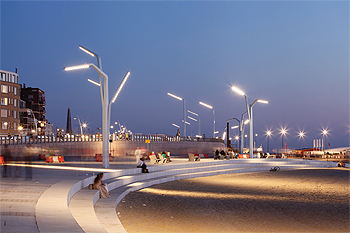 include Heijmans, KWS, Van Gelder and BAM. In addition to these clients, we also have contractors operating in the offshore sector, such as Van Oord and Boskalis, that are major clients.”

Another notable project for the company involved the coastal reinforcement and redevelopment of the Scheveningen Boulevard, which included the production of more than 6500 retaining walls and steps in a short time frame. Completed in time for contractors Van den Biggelaar en Liebrecht, Vrijenban faced the additional challenge of meeting the aesthetic requirements expressed by Spanish architect Manuel de Sola-Morales.

Other projects for the company include the design and manufacture of custom concrete seats for public areas, concrete elements, steps, tree and flowerpots, footings, T-beam and sleepers, poufs and squares and paving slabs. In addition to the manufacture of these items, Vrijenban has long-term experience in delivering run-on slabs, hanging wall elements; edge elements, concrete beams, wells and gutters, underground waste containers, rail infrastructure and kerbs to its diverse customer base.

Complementing the company’s long-term experience in delivering custom concrete solutions is its expert staff who also have the right skills to walk customers through both the design and implementation phases of a project. Employees are characterised by their ‘can do’ attitude, creativity and constructive approach throughout design and construction project; services include optimum quality design and a personalised look, further benefits include the integration of the company’s implementation expertise. Further cementing the company’s ability to meet complex demands are the key values that are entrenched within Vrijenban’s ethos; employees are to be adventurous, enterprising, hands-on, decisive and inventive. “Ultimately, we are quick and flexible and easy to communicate with when it comes to your customised concrete requirements; there is nobody nicer than us,” says Theo van Baal with a smile.

Not a company to rest on its laurels, Vrijenban made the strategic decision to further strengthen its operations with the acquisition of BAM’s concrete facility in Zuidbroek in January 2016. “Vrijenban was previously able to produce elements up to 10,000 kg in Delft, however, with this new plant in Zuidbroek we can now make elements up to 50,000 kg. This development has immediately made us a bigger player in the market and a partner for larger projects for major clients,” says Theo van Baal.

“Our first year after the renewed startup of Zuidbroek has been very successful so far, with some long-term experience from BAM personnel and a lot of new inspiration brought by our people, Zuidbroek has undergone a huge transformation. As such, 2017 is going to be an exciting and challenging year for us,” he concludes.