Back to Profile Gallery > Warmafloor

Having established itself in the UK market offering bespoke embedded conditioning systems, Warmafloor is leading the way in sustainable heating and cooling solutions

Having been established now for nearly 30 years Warmafloor knows its segment. Founded as a pioneer for underfloor technology in the UK, the company was very much ahead of its time in terms of offering a greener, more energy efficient solution to the market. “It was quite a difficult thing to get into buildings in the early stages as, at the time, building regulations didn’t ask for insulation underneath the floor. As soon as that came in, underfloor heating became much more popular and people started to buy into the whole concept of underfloor heating being a very low energy method of conditioning spaces,” explains Commercial Manager, Malcolm Jaques.

The concept of underfloor heating is one that has steadily grown over the years as building regulations demanded increasing levels of energy efficiency and a general awareness grows. “Today, when people are discussing how they’re going to condition a space, they are looking for very efficient energy saving and CO2 reducing ways of heating buildings,” highlights Malcolm. “Our systems 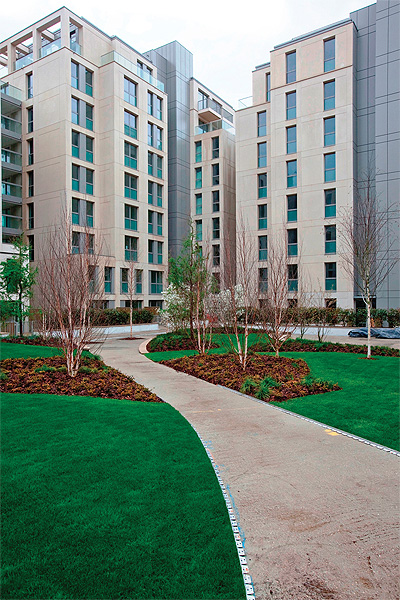 go into the floor mainly, but they can also go into ceilings and walls. We embed our coils into these surfaces, which gives a radiant heat effect requiring only a low temperature that gives you enough energy to warm the space and the people in that space.”

Mainly serving the commercial sector, Warmafloor offers a complete concept to commission service to projects ranging in size from small projects, through highrise buildings to large floor-area spaces. A particularly successful sector for the company is in education, as it has now amassed a portfolio of over 2500 school projects, a number that continues to grow. Warmafloor works mainly with M&E contractors at the design phase to tailor each solution to the specific building, before providing full installation and commissioning of the system.

Commenting upon the market, Malcolm is honest: “Conditions have been pretty tough and we have all suffered from the recession as construction was badly hit,” he says. “However, with a bit of luck and foresight we successfully tendered for the London 2012 projects, which was fantastic for us. It sustained the business through some of the worst times of the recession.” Work for Warmafloor on the Olympic Park included the Athletes Village, Polyclinic and legacy projects such as Chobham Academy, so work beyond the games continued for the company. “This year we have seen an improvement in the market as construction seems to have a bit more confidence,” continues Malcolm. “We’re optimistic without being overtly happy about the whole situation, because it could turn just as quick.”

In an equal measure of successful foresight, Warmafloor saw the need to diversify its core market from the education sector in response to a changing UK government. Malcolm discusses: “About seven years ago, we changed the way that we operated because we have been too reliant on school projects under the Labour government’s Building Schools for the Future programme. We saw fairly early on that there would be a change in government, so we changed our approach to hunt for highrise residential and inner city regeneration work, particularly in London.” The move was made at the right time, as today the company has developed a strong portfolio of this type of work.

Of note is its ongoing work at the Berkeley Homes project in Goodman’s Field. As phase one nears completion on 182 apartments, the company has recently won the contract to complete phase two of what will eventually feature 1000 apartments. “The reason we are successful here is that we offer a complete package in terms of our service,” highlights Malcolm. The project is also a good opportunity for Warmafloor to install its in-house developed TICS Modular system (Total Integrated Control Strategy) – a unique and innovative control system designed specifically for underfloor conditioning. “As buildings become much more efficient with higher levels of insulation, this kind of close control is now important for optimising energy efficiency and also the occupant’s comfort,” Malcolm adds. The use of Warmafloor’s underfloor technology at Goodman’s Field leads to a potential energy saving up to 60 per cent compared to traditional heating systems, therefore representing its significant cost and energy implications.

As it carries out around 500 projects every year, the project portfolio for Warmafloor is extensive. Other high profile contracts for the company include Manchester Metropolitan University, which included a unique style of chilled ceiling beams and the Great Court of the British Museum, which uses innovative technology to control temperature under its glass roof. Portcullis House, the Welsh Assembly, Scottish Parliament building and two of Airbus’s wing assembly plants also feature. The company is also a specified supplier for Aspire Defence’s MoD base programmes.

“For the next 12 months, we are focused on growth and consolidation,” explains Malcolm. “We recognise that the market is picking up, so in June we opened a Northern office based in Doncaster. In terms of consolidation, it’s about ensuring that we continue to do the right sort of projects that are appropriate to our business and our skill sets.” For the longer term the company looks to continue establishing itself in the high-rise, inner city regeneration work, particularly with London’s current construction boom, but it will also be focusing on an important climate change issue. “There is going to be an issue with climate change that buildings will overheat,” concludes Malcolm who has recently been in discussion with the Committee for Climate Change and Department for Energy and Climate Change. “Therefore it’s our vision over the next few years to get the message out there that we already have the technology to develop cooling strategies for buildings.”