The last decade has seen a revolution in tower crane technology, bringing improvements in safety and efficiency

Like every area of the construction industry, tower crane technology is constantly evolving and improving. Manufacturers of tower cranes continue to adapt and create new models to meet customer demand. At the same time, as a high-risk industry, in which working at height with heavy loads is the norm, technology is evolving to make heavy lifting safer.

Specialist tower crane hire company Bennetts Cranes has more than 90 tower cranes in its fleet and is the UK’s Raimondi crane dealer. Managing Director, Edward Seager, says that health and safety has improved significantly since he started off in the industry over 20 years ago, thanks to the computerisation of crane technology and key safety features on new models.

“The technology used in tower cranes has been transformed in the last decade,” said Edward, who heads up Bennetts Cranes from its main office and testing facility in Gloucestershire. “Much of the work has been to improve the safety of tower cranes and to reduce human error and site risks. This can be anything from auto-shut down on cranes when there is a technical fault, to cameras to improve vision for crane operators.

“But at the same time, like in any industry, design and technology improves to make equipment more efficient. In the construction industry, margins are low, therefore jobs need to run smoothly and to time – tower crane technology is central to this.”

To that end, technology has also driven efficiencies in how quickly cranes work and move, how much power they use – and of course they have got taller with the ability to lift heavier loads.

Hydraulic luffers
The invention of the hydraulic luffing jib tower crane was a real step forward for the tower crane industry, particularly in the UK, where luffers are used much more frequently compared to Europe, because of air rights regulations controlling the over-sailing of properties.

The first modern hydraulic luffer was designed by German engineer Frank Jost and manufactured and sold by Jost post 2005. An important aspect of the hydraulic luffer is its high out-of-service jib position. Unlike conventional luffing jib tower cranes that have a second winch to raise the jib using wire rope, topless luffers use a hydraulic cylinder under the jib, which enables them to raise the jib to near vertical.

The ability to park the jib at close to zero radius is a very attractive feature to avoid potential over-sailing of properties, which is a significant issue for urban areas in particular. But even more than this, hydraulic luffers are much more efficient because they have a smaller motor and therefore use less power.

At Bennetts Cranes, hydraulic luffers are a significant part of the overall fleet, with around 50 cranes from Jost and Raimondi.

Edward explains: “The invention of the articulating hydraulic luffer was very significant for the industry in the UK. Articulating luffers are better balanced which means less steel is needed, resulting in lower costs and space required as smaller towers can be used.”

Edward continues: “Small towers mean you can fit 48m on a single articulated luffer, saving transport costs. The small tower also fits in smaller lift shafts, for example, disability lifts which are often the only ones installed in blocks of flats and offices.”

The Raimondi LRH174
Raimondi launched the LRH174 last year – its first hydraulic luffing jib tower crane. As the UK’s exclusive Raimondi dealer, Bennetts Cranes was the first to take delivery of this new crane model, and the company now has six in its fleet with more on order. Several are already working on sites around the UK, including two in central London, at Harbour Exchange, and one on a mixed-use development in Chelsea.

The Raimondi LRH174 is a ten-tonne hydraulic luffing crane with a maximum capacity of 2.4 tonnes at a 50m jib length. It boasts a range of modern safety features, such as automatic heat monitoring, which can detect when any parts get too hot and shut the crane down, and automatic brake detection to ensure that the crane will not operate when the brakes are worn.

Bennetts Director, Tracey Pockett says that the most important safety aspect is the ability of the crane to detect if the crane is at the correct out-of-service angle, and in free-slew when parked.

“Some of the most common accidents relate to the crane not being put into free-slew when it’s out-of-service, or the jib not being at the correct angle. With newer crane models, the crane will not shut down without meeting this requirement, which takes away the element of human error.”

Tracey adds: “The Raimondi LRH174 is already becoming a popular model in our fleet, along with our Jost luffers, and we expect to have more working on construction sites over the next few years.”

Technology for health and safety
Health and safety are the highest priority for crane erection and operations, accidents are typically the result of either faulty equipment, or human error. In both cases technology is adapting to improve safety by detecting crane faults and taking away the risk of human error.

Most crane models today are controlled by computers, with sophisticated software that can detect errors, and shut off the crane when parts are not working properly. But it is still the responsibility of crane operators and staff on site to monitor, record and assess the cranes regularly.

Bennetts Cranes Quality, Health and Safety Manager, Sue Chamberlain, said: “Today, instead of tick sheets on clip boards, our crews have iPads where they can complete more thorough tests and reports. These also allow them, indeed require them, to take photos of various parts of the crane during an inspection as evidence of things like wear and tear. This not only promotes a thorough safety check by staff on-site, but it also leaves a full and detailed audit trail of health and safety checks.”

Bennetts Cranes is also trialling some brand-new technology to the market. An innovative camera using the light spectrum can be pointed at cranes that are in operation to detect temperature. Parts that are producing a lot of heat are typically under pressure or have wear and tear, and therefore by tracking areas of unusual heat, you can identify possible parts that need replacing or that are not performing correctly.

Currently independent operators come to site to check the cranes with the cameras, but in the future the team could have its own cameras on site for local teams to carry out their own regular checks.

“At every stage, we’re open to trying and incorporating new technology into our daily practices to improve our health and safety processes and generally make our equipment and sites safer for staff,” said Sue.

BlokCam is a wireless crane camera system that can be quickly and easily deployed to the hook or boom tip of a crane. This is currently being used by Bennetts Cranes on various construction sites.

The sound and view from below the camera are transmitted from the camera on the hook to a screen in the crane cab. This allows the crane operator to see and hear the load and surroundings, giving an unobstructed, live, visual feed of the critical areas that working in blind would never allow.

The technology is robust and uses strong magnets to hold the equipment in place and the cameras dramatically improve communication between the operator and riggers using the advanced transmitting and imaging technology.

The result is reduced blind spots for operators, reduced risk of hazards and collisions and a smoother, quicker operation on site.

Edward said: “BlokCam as a business understands the crane and construction industry and has built something that is truly fit-for-purpose – already we’re finding it useful equipment.

“The camera system is an excellent addition to our business, improving health and safety for our employees, our clients and everyone on site, as well as offering better unobstructed views for our crane operators from inside the cab.”

Edward added: “At the moment this technology is an optional extra, however we do see that further into the future this could become a standard feature, or it could even be something that ends up being built into the cranes themselves.

“Technology such as this is certainly the future of crane operations and construction and a good example of the direction in which crane technology is moving.” 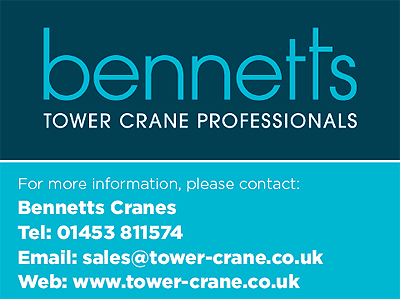