Reality Capture, or the process of digitally collecting three-dimensional, or 3D, information about the real world, takes many forms, from photogrammetry based on 2D digital images, to 360-degree bubble images, to 3D laser scanning. Of these, the most geometrically precise is 3D laser scanning, which is the application of LIDAR (Light Detection and Ranging) to measuring the location of thousands or millions of discrete points per second and compiling them into a three-dimensional whole. 3D Laser Scanning has long been used for documenting existing conditions before a project begins, or for documenting the as-built conditions at the end, but recent advancements in capture and processing unlocks value at all phases.

3D Laser Scanning basics
3D Laser Scanners take a wide variety of forms and have been rapidly changing. For example, terrestrial laser scanners refer to laser scanners that are mounted on a tripod or other fixed location, and spin in place to capture up to 360 degrees around them. The scanner is then moved to various positions to ensure coverage, and the individual scans are stitchedtogether into a whole. This stitching process was once the domain of specialised software users, but through new technologies that use computer vision and edge computing principles to track alignment on the fly, can largely be automated today. These terrestrial scanners can range from 1kg and the size of a coffee can, up to several 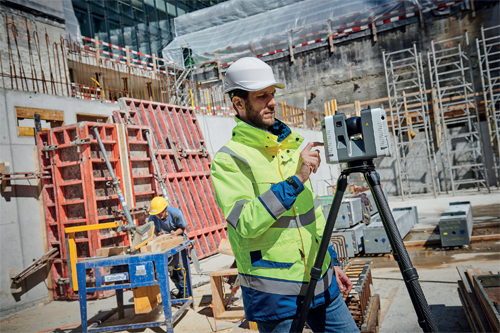 kg and the size of a carry-on suitcase.

Other 3D Laser Scanners are mobile in nature, mounted to aircraft, to vehicles, to wearable backpacks, or even in handheld form. These scanners use additional technologies such as GPS receivers to compute their position outdoors to create an accurate 3D image, or in the case of handheld scanners for indoor capture, rely on onboard computer vision and inertial measurement sensors to calculate a position relative to the space captured. The latest handheld scanners are exceptionally easy to use, with single-button interfaces and simple apps to guide the user.

A 3D Laser Scanner creates what is called a point cloud, which is simply the millions of measurement points in three dimensions, with information such as color (often called ‘texture’) attributed to them. In and of itself, the point cloud is often a difficult data set to work with, because it is large to store and transmit, and can be hard to understand when reviewing on a computer screen. This is when software plays a critical role in meeting the needs of the market, because there are many ways to interpret and process the data.

Experiencing 3D Laser Scan Data
Users and consumers of 3D Laser Scan data are now offered a wide range of ways to experience the data and to produce deliverables. There have been advancements in each of the broad categories of software.

Desktop/tablet and client-server environments can be used for rapid creation of deliverables such as digital terrain models and concrete flatness evaluations. This software eliminates any need to transmit large data sets to the cloud, which can be cumbersome or even impossible depending upon jobsite connectivity. These packages are often connected seamlessly with CAD or BIM software, such that 3D Laser Scan data of actual site conditions can easily be compared with the modelled, or planned, conditions.

Alternatively, the point cloud data can be uploaded to the cloud into environments that are designed for collaborative web or mobile device review of the data. In this case, the point cloud is often transformed into what is called a ‘mesh,’ which is vector data representing the 3D shape, and which is much smaller in terms of file size and easier to transmit. This speed can come at the cost of a loss of fidelity, which must be considered amongst the trade-offs.

The data can also be used and experienced in the context of global digital reality, by uploading to web-based environments that contain representations of the city, countryside, or town surrounding the project. For example, a detailed scan of an individual building – including its interior data – may be placed securely in a subscription-based city model that has been captured with aircraft-mounted or vehicle-mounted sensors.

Uses for 3D Laser Scan data through the project phases
For the sake of simplicity, one might consider the built asset lifecycle as five phases: planning, design, construction, operations, and renovation.

In the planning phase, a common use case is to better understand the environment where the project will be placed. The scan data is translated into realistic existing building exterior surfaces, terrain models, and other simple representations that non-technical reviewers can understand. This enables stakeholders and the public to understand how a proposed new asset might fit into and affect the surrounding area.

During design, these point clouds and meshes can be used as the backdrop for new designs. For example, a new coffee shop interior might be designed with the scan of the existing space and shopping centre as the backdrop. Or, existing pipes and ducts might not be modelled, but might be represented in that interior construction plan as simply the captured data.

In construction, the usefulness of the laser scan data becomes more intensive and regular. 3D laser scanners are used prior to concrete pours to verify that rebar is in the correct location and that penetration sleeves are placed per the plans. During pours, the scanner quickly checks for flatness and levelness, and software indicates on a tablet computer in the field where the high and low points are, in a matter of two to three minutes while concrete is workable. After curing, the same equipment and software is used to create compliance reports to show that specifications are met or to guide remediations. Final measurements for glass panels are made from the safety of the ground, and with accuracies required for fabrication tolerances.

The operations phase of a facility is filled with opportunities to use 3D laser scan data. Handheld laser scanners provide an easy way to capture existing space information, and software is capable of semi-automating the transition to floor plans and building models for facility and space management purposes. Online portals for viewing measurable data based on 3D Laser Scan information allows maintenance workers to preview the environment in remote facilities before commuting to the site, saving hours wasted previewing conditions.

Finally, as the facility reaches the need for renovation, there is no need to start new plans and designs with a blank slate. Software allows for virtual demolition of existing construction, making room for new designs in the context of the existing without disturbing existing occupants.

Conclusion
Throughout the lifecycle of a built asset, whether a building, an infrastructure component, or a process plant, 3D Laser Scanning provides AECO professionals with fast, accurate data to aid decisions and measure progress in a safe, reliable manner. Hardware – or sensors – come in highly accurate fixed-position terrestrial form, and in mobile forms ranging from handheld and backpack to vehicular and airborne: there is a tool for most any job. Software makes for the solution, producing valuable deliverables and providing insights to stakeholders inside and beyond the project teams.