Back to Profile Gallery > Quinto Crane and Plant Hire

Embodying 40 years of proven experience as an innovative crane and plant hire company, Quinto Crane and Plant Hire is set to continue to raise the bar throughout 2017 and beyond
Rising to the challenge

Embodying 40 years of proven experience as an innovative crane and plant hire company, Quinto Crane and Plant Hire is set to continue to raise the bar throughout 2017 and beyond

Operating from its Norfolk-based headquarters in the city of Norwich, Quinto Crane and Plant Hire (Quinto) is a leading crane and plant hire company that serves clients throughout the East of England, East Midlands and Greater London with its network of depots that are managed from a centralised logistics centre. The business was originally founded in 1977, taking its name from the Latin quintus that translates into the modern Italian Quinto meaning ‘fifth’. This represented the fact that the company was originally comprised of five locations and five directors, while Quinto has since grown to encompass ten sites across Chelmsford, Great Yarmouth, Ipswich, Kings Lynn, Leicester, London, Peterborough, Norwich and Ware, with an additional new site opening in Cambridge.

Quinto currently employs around 110 members of staff across the business and was taken over by its current owners when, Oliver Arnold and his wife Hannah Arnold, acquired the company during October 2014. This has enabled Quinto to continue to serve as a family business, while continuing to invest in its national coverage and fleet of equipment. “I think the fact that Quinto is 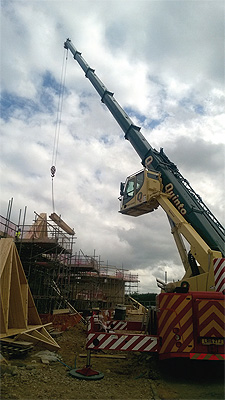 privately owned is an important factor for the business and what this brings to the company is the focused drive of each individual working within the firm. We are a family-owned operation, with my wife and I managing the business and our children also becoming increasingly visible within the company. This ensures a strong future succession for the business and a very personal will to succeed,” explains Managing Director, Oliver Arnold. “A lot of the team here have quickly become close friends and we work in a very personal way. The development of the company is not always financially driven, as it also takes into account the bigger picture of securing jobs for families and caring for the team of staff within the business. We have a very skilled team with a high level of professionalism and determination in the field, which is hugely important during the continued period of transition following the change of ownership of the company.”

Although the business had previously struggled to remain competitive as a result of a lack of investment over several years, within only 12 months of taking over the company, Oliver and Hannah were able to steer Quinto straight into profitability. This was achieved through a combination of restructuring the operational practices of the business, allowing it to encourage a culture of co-operation and support between the company’s depots; investment into modernising the Quinto fleet of equipment; and the expansion of depots into key market locations. “Cambridge for example, is a significant up-and-coming area with links coming out of London and I think that it is a location where it will be increasingly important for us to maintain a strong presence moving forward. It is relatively expensive to rent a site in Cambridge, which is what we are currently doing but we will look at the long-term viability of this and plan to acquire a site similar to our Norwich depot in due course. Norwich is our main site largely owing to the fact we live so locally to it, however in time the headquarters will move some of its operations to other areas within the business or a more central location to suit the needs of the business and its clients,” Oliver says. “Changing the business to operate from a central hire desk in Norwich has had some major advantages, but it equally does have its minuses. The big challenge has been to centralise the running of the business without losing the company’s local feel, which is something that we have tried very hard to achieve.”

In tandem with the company’s reorganisation and investment into its operational locations, the Quinto fleet has also benefitted from significant additional resources in recent years. This has allowed the business to ensure that a comprehensive and modern fleet of machines is on hand to support its new drive in the market. “We have invested over £6 million on new equipment since taking over ownership of Quinto, which is roughly half of the company’s yearly spend. We have bought several new cranes but have had to slow down a little bit recently because of the relationship between the euro and the British pound. This is something that has a significant impact on the business because our cranes come out of Germany. We now run 45 cranes daily and I am confident that the relationship between the UK and Europe will improve over the coming months, which is well in time for our latest crane order that is scheduled for March 2018. The moral of the story is that we have taken the company and got the foundations of the business right, which has allowed us to remain profitable despite any existing challenges in the marketplace,” Oliver reveals.

“We have invested in new equipment and modern technology since coming into the business, which has been hugely significant in that it has allowed Quinto to acquire some very unusual machines that set the company apart from competing businesses,” he adds. “This includes a Spierings mobile tower crane and a Böcker Maschinenwerke crane, which has allowed us to move into new areas and to be more efficient for our existing customers. This has been supported by the addition of new people into the business, who have different ways of operating than we may have previously employed and this has also helped us to incorporate a different level of customer base.”

As Quinto and the wider construction industry enters into 2017 following a turbulent 12 months for Europe and the financial market as a whole, the company will continue to build on its current foundation to ensure the on-going growth of the business. “Our strategic vision for the future is to better understand the market to be in a strong enough position to weather external factors outside of our control, such as Brexit,” Oliver concludes. “This has had a major impact on the construction industry with some projects being put on hold and others tentatively beginning to start up again. We are committed to building a company that is strong enough to withstand these challenges, while always operating in a safe and professional manner.”