Holding back the floods

The destructive power of floodwater has been all too evident during another winter of relentless and repeated storms in some parts of the UK. Finding long-term solutions to building flood resilience is back at the top of the agenda, and it is the civil engineering community that can provide precision-engineered answers.

Following Storms Desmond and Eva, the Government confirmed details of its National Flood Resilience Review to assess how the country can be better protected from future flooding and extreme weather events. It says it will start to consider the longer-term strategy for flood defences later this year, aligning closely with Defra’s work on integrated catchment-level management.

Flash river floods are one of the most powerful, and often all-too-sudden, consequences of relentless rainfall in vulnerable low-lying areas. The problem is, it’s already too late when water from the surrounding uplands has raced down highland slopes to the valleys below.

In response to the winter flooding, many expert commentators have highlighted upstream flood storage as one solution that could provide more sustainable, long-term resilience. UK Environment Secretary Liz Truss and Neil Parish, Chair of the EFRA committee, also both seemed to suggest that providing positive rewards for farmers for managing temporary flood storage areas upstream of vulnerable areas could be considered.

Well-proven engineering
In fact, the value of holding back the river water upstream, well away from vulnerable homes and businesses, in upstream flood storage defences is already a proven and sustainable alternative.

It makes a lot more sense than just building higher and higher walls, floodgates and levees in the valleys and hoping that the surging river will not overtop them – especially as climate change makes such intense storm events more likely.

Controlling floodwater by holding back flow means finding space to store the water temporarily upstream so it can be discharged at a rate that protects the downstream environment. Whether in a river, a Sustainable Drainage System (SuDS) or below ground in a combined sewer, the same rules of precision engineering apply. 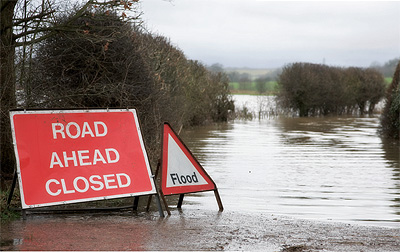 Vortex flow control technology is already familiar to civil engineers and contractors as a means of regulating the flow in watercourses by flattening out peak flows, thereby protecting the downstream catchment from flash flooding. Hydro-Brake flow controls are a commonplace solution in our urban environments as a sustainable, no-power and low maintenance way of managing flood protection.

Civil engineering has also taken on board their long-proven ability for larger-scale flood alleviation measures for rivers and watercourses, leading to some of the most spectacular schemes. The technology has been ‘supersized’ in fluvial projects across the country and is now a familiar approach that is successfully protecting more than 4000 homes and businesses in cities, towns and villages.

The world’s largest Hydro-Brake flow controls on the White Cart River hold back flows in the highlands above Glasgow. At the time of planning the scheme, it was recognised that building defences along the river’s urban banks alone would have required flood walls over two metres high, which would have been a hugely disruptive construction project and would have closed down the natural river system in the some places.

Instead, three upstream flood storage areas were constructed on agricultural land in the highlands above Glasgow with a capacity to hold up to 571 million gallons of floodwater. At the same time they provided 90,000 m2 of wetland habitats. As part of the scheme design, plans were made to enhance biodiversity and wildlife habitat of the area with the creation of woodland, scrub, and species-rich wet grasslands, shallow scrapes and ponds and other artificial habitats.

One of the biggest advantages of the cone-shaped vortex flow control technology is that it comes into operation automatically as the river levels rise. There is no power needed, no one needs to be there to operate the flood defence in an emergency, and there are no moving parts or electrical systems that could fail.

The flood storage has been custom-designed to precisely calculate the capacity and reach of upstream storage areas; using the correct Hydro-Brake flow control can reduce the volume of flood water to be stored by up to 30 per cent compared to fixed orifice controls; reducing land take during storm events.

Flow control selection
Choosing the correct flow control solution follows the same principles for any scheme, however large or small. It depends firstly on the physical space available for storage – there may be strict limitations in an urban area, for example – and secondly on the affordable project costs of creating the storage, both in terms of land value and construction.

The maximum storage water level is often limited by the existing topography, infrastructure or property. The engineered storage area could be used when not in flood for agriculture, or for leisure and recreation. Drain down after events should therefore ideally be rapid, to restore land to its primary use, and authorities may need to ensure public education to warn of the risk of flooding, especially where flood events are infrequent but significant.

A range of solutions is available starting with a basic orifice plate, best suited where the area available for storage is not limited. The most advanced vortex flow controls offer precision engineering that achieves the best-possible hydraulic response for a device without any moving parts or external power requirements. To get closest to the smallest upstream storage volume, a float-operated flow control provides precise performance by creating a continuously variable orifice that changes in direct relation to the water height and enables rapid drain down to protect against the next peak flow.

Engineering a balance
Hydrological and hydraulic modelling for each of the control technologies, combined with a range of storm event and duration probabilities, will be used to calculate the storage needed and its capital investment implications. The storage volume needed must be carefully balanced against the cost and complexity of the flow control solution selected.

Mark Goodger is Regional Technical Manager for Hydro International’s Stormwater Division. Hydro International, which has offices in the UK, USA and Ireland, provides cost effective solutions for controlling the quantity and improving the quality of water with minimal maintenance. Hydro products have won international awards for outstanding contributions and technical innovation in the water industry.